The work of Friedrich Hayek shows why EU governments cannot spend their way out of the Eurozone crisis.

Debates between ‘Hayekian’ and ‘Keynesian’ perspectives constitute one of the main conceptual fault-lines of the Eurozone crisis. In the first of two EUROPP articles covering this debate, Steven Horwitz discusses Friedrich Hayek’s work and why it presents a compelling case against governments using increased public spending to solve Europe’s economic problems.

As EU economies continue to struggle, economists like Paul Krugman are calling for another round of stimulus spending, believing that the size of the programmes adopted early in the global recession were insufficient. Desperate politicians may well choose to go in that direction, if for no other reason than that the arguments against doing so are often not very effective.

So why not another round? The most powerful argument against more stimulus comes from Friedrich Hayek and the Austrian school. The key to their view is their understanding that economic resources, whether capital or labour, are not fungible. That is, capital goods and human beings have a multiple, though not infinite, number of ways they can contribute productively to the value creation process.

The productive structure of an economy is like a jigsaw puzzle where the pieces of capital and labour must fit together in particular combinations. Only specific pieces can be linked with others. However, unlike real jigsaw puzzles, we don’t have a picture of the pattern we are creating. Instead, we have prices, profits, and losses to inform us when pieces do or do not fit together appropriately. If those signals are working well, we will have success at fitting pieces together in ways that are orderly. The interesting thing about that orderly use of the jigsaw puzzle pieces is that we might not need to use all the pieces at any one time to generate a recognisable and desirable pattern. 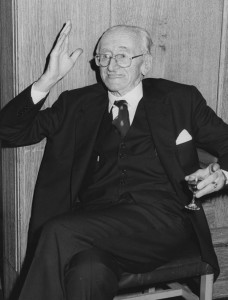 Friedrich Hayek, 1981, on the 50th anniversary of his first lecture at LSE (Credit: LSE Library)

One way of understanding the boom that produced the bust and the subsequent slow recovery is that artificially low interest rates generated by the central bank and government interventions in housing markets weakened the price and profits signals that inform us of whether the pieces fit. The result was a puzzle that used almost all of the pieces, but forced them together in ways that did not produce a recognisable pattern. In other words, the economy’s productive structure was not sustainable, as we discovered in 2008. The recession is the dismantling of that puzzle and the recovery is the attempt to reconstruct it, but this time in such a way that the pieces actually fit together. Where we are now, in a world of high unemployment rates and low investment, is the equivalent of lots of puzzle pieces sitting around not being put together.

What advocates of stimulus are arguing is that we need spending, just any old spending, to jump start struggling economies. But this argument must assume that it does not matter which capital and which labour are brought out of idleness and into what sorts of activities. They must of necessity ignore the specificity of resources and their limited complementarity. It does us no good to try to force pieces together that don’t fit, as that’s what got us in trouble in the first place. And the point of doing a jigsaw puzzle of this sort is to get the pieces to fit in a way that forms an orderly pattern, not to simply use them all up.

The assumption in most stimulus spending is that there are projects just waiting to be pursued if only we would spend the money. What is overlooked is whether the capital and labour that are idle are the resources best suited to those projects, not to mention whether consumers and citizens even want those outputs in the first place. Just buying, hiring, and producing for the sake of “doing something” will create a structure of production that is quickly found to be unsustainable. A few projects may be “shovel ready,” but most will require engineers and others to do the planning. If the unemployed are mostly construction workers and financial managers, these projects will not be able to find the engineers they need at wages they can afford, and unemployment will not be reduced.

Politicians and bureaucrats lack the knowledge to know which pieces fit with which pieces as they cannot know the nature of the idled resources and what consumers want. They are unable to know what is needed to create a sustainable recovery. One of the most fundamental insights of Hayek and the Austrians was that prices, profits, and losses serve as knowledge surrogates to coordinate the decentralised decisions of producers and consumers, themselves often based on knowledge that they could not communicate any other way.

Politicians who are structurally unable to know how best to allocate stimulus resources will inevitably distribute them to those persons and groups who will give them the most electoral support. The Austrian caution about the limits of politicians’ knowledge suggests that no matter what is drawn up on the blackboard, the politicisation of stimulus spending is not an accident and cannot be avoided. Stimulus spending that goes to groups that will provide the most votes will ensure that the right combinations of capital and labour will not be formed.

So what can we do? The answer lies in the criticism: free up competition, prices, profits, and losses so that entrepreneurs and others can finish the process of tearing down the mistakes of the boom and figure out how to reallocate those resources to their new best uses. That process takes time, but if politicians cease meddling in it and start allowing market processes to do their job, particularly by allowing failed firms to go bankrupt and sell off their assets for more valuable uses, recovery will take place more quickly.

Before the advent of Keynesianism, most recessions were very short lived as producers were left free to shuffle the jigsaw pieces into better combinations. It is the very lack of trust in markets, and the misguided trust in the political process, that Keynesianism produced that now leads us to think stimulus spending is necessary and effective. Hayek and the Austrians give us good reasons to think otherwise.

Steven Horwitz – St. Lawrence University
Steven Horwitz is the Charles A. Dana Professor of Economics at St. Lawrence University in Canton, NY. He is the author of two books, Microfoundations and Macroeconomics: An Austrian Perspective (Routledge, 2000) and Monetary Evolution, Free Banking, and Economic Order (Westview, 1992). He has written extensively on Austrian economics, Hayekian political economy, monetary theory and history, and the economics and social theory of gender and the family.