EU policy makers can no longer rely on the growth miracle of emerging markets to reduce the need for domestic sources of growth.

A provocative Project Syndicate op-ed by Dani Rodrik – arguing that the recipe that helped generate the growth miracles of the last decades will prove harder in the future – has generated an interesting debate in the blogosphere about the old economics question of convergence between countries. Jérémie Cohen-Setton and David C. Saha summarize the current debate and recommend that EU policymakers should not put too much hope in emerging markets taking the pressure off the need for domestic growth.

The death of the manufacturing convergence engine

In a revised version of the paper that he initially prepared for 2011 Jackson Hole Symposium, Dani Rodrik argues that despite a potential growth rate that is as high as it has ever been since the end of the Second World War, in practice most of the convergence potential is likely to go to waste. Convergence is anything but automatic. It is conditional on specific policies and institutional arrangements that have proved hard to identify and implement. And while the policy and institutional setting has improved across the developing world, these improvements serve mainly to enhance these economies ‘resilience to shocks and help avert crises, rather than stimulate ongoing economic dynamism and growth. Sustained growth requires something on top of – and sometimes in lieu of – conventional macroeconomic and openness policies. It requires active policies that promote economic diversification and foster structural change from low-productivity activities (such as traditional agriculture and informality) to mostly tradable higher-productivity activities. It requires pulling the economy‘s resources into those sectors that are on the automatic escalator up.

But Dani Rodrik argues that this growth recipe will prove harder in the future because: 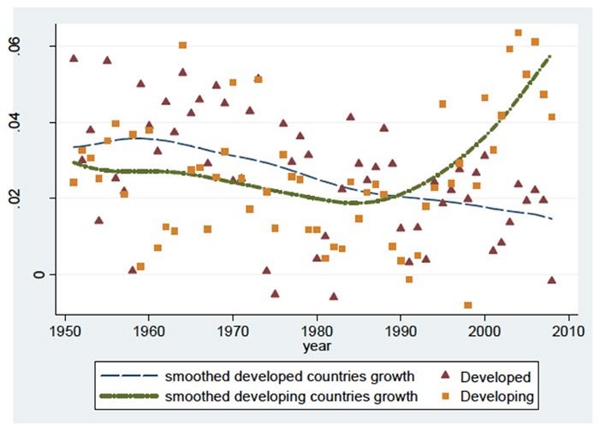 Richard Baldwin writes that the problem is that Dani Rodrik uses 20th century thinking about 21st century globalization. A key intellectual blinder in all this is the notion that technology is country-specific. Before the information and communication technology revolution this might have been a good approximation, but now that it is easier to control the application of know-how abroad, we have discovered that technology is primarily firm-specific. Firms bring with them the technology, managerial capacity and everything else except labor to developing countries where they open factories, thus jump-starting industrialization. So China’s growth was not due the rich-nation policymakers “looking the other way”. It was due to rich-nation firms teaching low-wage workers and managers how to produce world-class parts and components, or how to assemble them into world-competitive final goods. As wages in China rise, Chinese firms are now giving similar lessons to Bangladeshi and Vietnamese workers and firms.

Ryan Avent writes that the result of this process seems, for the moment at least, not to be “no more growth miracles”, but rather “growth miracles everywhere”. China is at the hub of a “Factory Asia” supply chain, which has borne up with it the economies of places like the Philippines, Malaysia, and Vietnam. Their growth appears to be positively correlated with industrialization in China. In a sense, there may be fewer growth miracles quite simply because growth now seems less miraculous.

In a 2011 paper, Richard Baldwin illustrates the differences between 20th century trade and 21st century trade with the following diagram. The top panel illustrates 20th century trade; trade is dominated by goods made in factories in one nation and sold to customers in another. There are complex two-way flows of goods, people, and ideas (the double-headed arrows) but primarily within factories. The lower panel illustrates 21st century trade. Here factories and offices have been unbundled internationally thus creating the trade-investment-service nexus where some of the complex two-way flows that used to take place within factories and offices now take place across international borders. 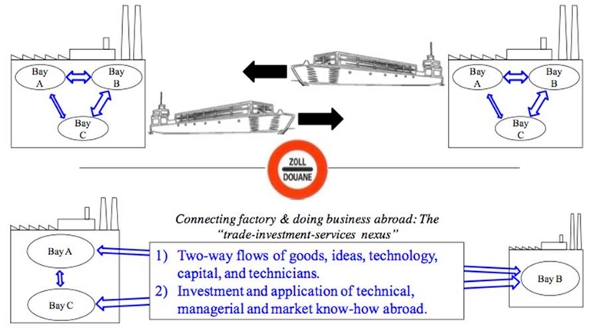 Rebalancing and the pace of growth

Michael Pettis writes that the secret to success in the past has been to force up domestic savings rates to fund domestic investment booms, and to rely on excess consumption abroad to balance accounts. If the over-consuming countries of the rich world are no longer willing or able to over-consume, how can the balance work? Without consumption rising relative to production abroad, consumption growth at home will be the upper limit in the medium term to domestic growth in production because permanently higher investment rates will no longer be sustainable.

Michael Heise writes that more moderate growth in the emerging markets does not mean that the economic catch-up process is coming to an end or indeed has already run its course. Nor should we forget that more moderate growth (less export-led growth in emerging market surplus countries and weaker consumption growth in deficit countries) would also bring with it a reduction in global imbalances—something to be welcomed, not lamented.

Transforming a resource curse into a blessing

Joseph Stiglitz writes that new discoveries of natural resources in several African countries – including Ghana, Uganda, Tanzania, and Mozambique – raise an important question: Will these windfalls be a blessing that brings prosperity and hope, or a political and economic curse, as has been the case in so many countries? Real development requires exploring all possible linkages: training local workers, developing small and medium-size enterprises to provide inputs for mining operations and oil and gas companies, domestic processing, and integrating the natural resources into the country’s economic structure. Of course, today, these countries may not have a comparative advantage in many of these activities, and some will argue that countries should stick to their strengths. From this perspective, these countries’ comparative advantage is having other countries exploit their resources. That is wrong. What matters is dynamic comparative advantage, or comparative advantage in the long run, which can be shaped.­

The future of the North-South growth relationship

If the “age of growth miracles” in Asia and South America indeed comes to an end, EU and US policymakers should not place too much hope in emerging markets reducing the need for domestic sources of growth. Growth in the BRICs particularly has provided some stability to the world economy in the past few years of economic crisis.  Although good arguments in favour of continued high growth rates in emerging markets and the developing world exist, the debate should lead one to at least not regard the growth of the past as a given that will continue on for the next few decades.

Worries about future growth rates in emerging markets should also remind policymakers that, irrespective of whether miracles will persist or not, excessive reliance on growth abroad driving their domestic economies is a risky economic strategy anyway. This holds for both types of reliance: the US type, in which domestic overconsumption was (and is) funded by Chinese savings and the German type with growth driven by the export of investment goods, resulting in a current account surplus. As large current account imbalances cannot be sustainable in the long run, rebalancing in emerging markets should thus be welcomed – facing the question now of how to spur growth and readjust domestic consumption and saving is preferable to facing a balance of payments crisis in the future.

The best of all worlds would clearly be rebalanced growth at high rates in emerging economies creating spillovers for the rest of the world economy. But as uncertainty about the growth rates exists, developed economies are well advised to concentrate on tackling their domestic growth challenges.

A version of this article originally appeared on the Bruegel blog.

Jérémie Cohen-Setton
Jérémie Cohen-Setton is a PhD candidate at UC Berkeley. He was previously economist at HM Treasury where his work focused on the preparation of the London Summit. Jérémie worked at Bruegel in 2007 as research assistant to Jean Pisani-Ferry after graduating from the Paris School of Economics.

David Saha
David C. Saha is a PhD student at the Freie Universität Berlin. David specializes in public economics and worked as research assistant at Bruegel in 2008. He holds an MSc in Economics from the LSE and an MA in Political Science from Columbia University.