How satisfied are European citizens with the democratic performance of European institutions? The answer is: it depends. Research suggests that opinion formation on the performance of a democratic regime is contingent on a cost-benefit assessment people make about the regime. These individual cost-benefit assessments can be based on various considerations, such as evaluations of political performance, economic performance, and expectations of governance in the near future.

The European supranational polity is different from national democratic systems in many ways and the formation of opinions at the European level is therefore likely to be different from the national level. European decision-making becomes attractive when benefits can be generated, or when the difference between the performance of national and European institutions is unfavourable for the nation-state. The balance between perceptions of supranational and national institutions may be crucial for evaluations of the EU’s democratic performance. Therefore, we need to take the characteristics of national institutions into account to further our understanding of citizens’ evaluations of the quality of the EU’s democratic process.

National institutional quality as a yardstick

Using data from a CAWI voter survey conducted in the context of the European Parliament elections of 2009 in 21 member states (including a number of items measuring individual perceptions and evaluations concerning democratic satisfaction, political trust, efficacy, knowledge, interest and participation), we assessed whether institutional quality at the national level affects democratic performance evaluations of the EU. We additionally used country-level data as governance indicators.

Figure 1 – Quality of institutions and satisfaction with European democracy, per country 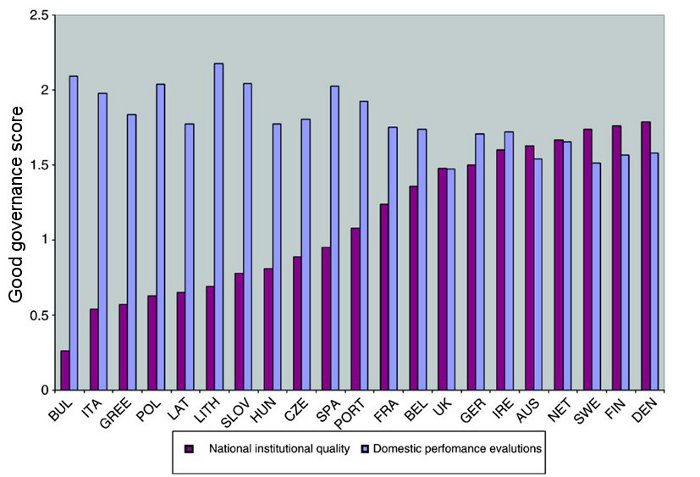 Note: Scoring is derived from average of six indicators of good governance: ‘Voice and accountability’, ‘Political instability and violence’, ‘Government effectiveness’, ‘Regulatory burden’, ‘Rule of law’ and ‘Control for corruption’.

These results also indicate the existence of different perceptions across countries, both on the actual performance of European institutions, and on the expectations citizens have towards those institutions. This finding is important, as it demonstrates that legitimacy concerns should also be acknowledged differentially across countries. The overall pattern of these country differences can be perceived as a division between East and West, or as a division between new and old members, because of differential familiarity levels with the EU, stemming from a (lack of a) socialization process. We controlled for both categorizations, but neither the East-West divide, nor the old-new categorization was significant. Still, the fact that Eastern Europeans appear more satisfied with EU democratic performance leaves us with some questions this study cannot answer. Is this only temporal? Will this pattern (from 2009) persist when citizens in the new member states get more acquainted with the European institutions? Only future research can provide answers on these questions.

This is a summary of the article: Desmet, Pieterjan, Claes de Vreese and Joost van Spanje (2012) “‘Second-order’ institutions: national institutional quality as a yardstick for EU evaluation” Journal of European Public Policy 19(7): 1071-1088.

Pieterjan Desmet – University of Amsterdam
Pieterjan Desmet is a PhD candidate at the Amsterdam School of Communication Research. His research focuses on citizens’ evaluations of the democratic performance of the European Union. It is part of the ELECDEM project which takes a comprehensive approach to the study of electoral democracy.

Claes de Vreese – University of Amsterdam
Claes de Vreese is Professor and Chair of Political Communication and Scientific Director of The Amsterdam School of Communication Research at the Department of Communication Science at the University of Amsterdam. He is also Director of the Netherlands School of Communication Research, the national research school in communication science, recognized by the Royal Dutch Academy of Arts and Sciences KNAW. Finally, he is Adjunct Professor of Political Science and Journalism at the University of Southern Denmark. His research interests include comparative journalism research, the effects of news, public opinion and European integration, effects of information and campaigning on elections, referendums and direct democracy.