The EU has long aspired to be a major player in global affairs. Despite having considerable diplomatic resources, however, Daniel C. Thomas argues that the organisation consistently punches below its weight in negotiations. Using disputes over the International Criminal Court as a case study, he concludes that even when there is a high degree of unity between member states, the EU is often undercut by countries such as the United States who are willing to act more forcefully in the diplomatic arena.

As the European Union grapples with its most severe internal crisis since the Treaty of Rome was signed fifty-five years ago, it may seem odd to worry about the effectiveness of EU foreign policy. But despite the Eurozone crisis, the Union as a whole has long aspired to shape world order in line with its stated goals of effective multilateralism, the promotion of democracy and human rights, and sustainable economic development. Moreover, from the shattered streets of Aleppo to the hallowed halls of the United Nations, other actors have called on the EU to play a global role commensurate with its collective weight (27 member states with 500 million citizens and 2 UN Security Council vetoes, the world’s largest market and foreign aid budget).

The question thus arises whether the EU is really doing its best in this regard. My recent research suggests that the EU is significantly less effective than its collective weight would lead one to expect. The explanation for this lack of effectiveness seems to lie to a disturbing degree in the EU’s self-imposed reluctance to mobilise its considerable resources in support of its own collective foreign policy goals. And I don’t mean military resources, which are admittedly difficult for the EU to deploy abroad, for a variety of reasons.

I decided to probe the conventional assumption (often heard in Brussels) that the EU will be effective when it acts in a coherent manner.  As the EU Council declared in 2000, “reinforcing the coherence of the Union’s external action and realising its policy objectives are priorities if the Union is to pull its full weight in international affairs.” But is this coherence-effectiveness argument truly valid? Despite the pervasiveness of commentary on this issue, few scholars have addressed it in a systematic empirical fashion.

To start, I developed a simple definition of EU coherence: the adoption of determinate common policies and the pursuit of those policies by EU member states and institutions. The first dimension, policy determinacy, reflects how clearly a policy adopted by the EU articulates the Union’s goals and how narrowly it specifies the behaviours incumbent upon EU member states and institutions in order to achieve those goals. The second dimension, political cohesion, reflects how fully EU actors support whatever common policy has been agreed. EU coherence is thus greatest on any given issue when it belongs in the upper-right corner of the following two-dimensional space: 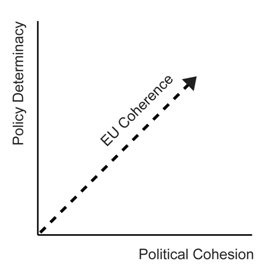 As indicated above, the conventional wisdom asserts that greater EU coherence will yield greater EU effectiveness. To test this claim, I define EU effectiveness simply as the Union’s ability to shape world affairs in accordance with the objectives it adopts on particular issues. These objectives could take many forms, including achieving certain material or environmental gains, promoting respect for certain values, shaping international institutions in a certain way, aiding a particular state, or shaping the outcome of a particular conflict.

To test the relationship between coherence and effectiveness, I examined the EU’s global confrontation with the United States over the jurisdiction of the International Criminal Court (ICC) during the period 2002-2007. In particular, I focused on the success of the EU’s efforts to resist the United States’ official campaign to sign bilateral non-surrender agreements (BNAs) with other governments around the world. In-depth study of this case yields important lessons for the broader challenge of EU foreign policy effectiveness.

The American BNAs were designed to ensure that no U.S. citizens, government officials, military personnel or other employees would ever be transferred to the ICC. But they were drafted to be reciprocal: they would also shield persons from the other signatory state from transfer to the ICC. BNAs would thus undermine the effectiveness of the ICC as a deterrent to mass atrocities and violate the compliance obligations of those states that were party to the Rome Statute. And if other states followed the US lead and launched their own BNA campaigns, a web of bilateral agreements effectively neutering the ambitions of the ICC would soon cover the world. As such, BNAs were a direct threat to the EU’s formal commitment to support the good functioning of the Court and respect for the Rome Statute that created it.

Contrary to the expectations of those who ridicule the Common Foreign and Security Policy, the EU actually exhibited considerable coherence on this high profile and potentially sensitive foreign policy issue. In the autumn of 2002, the member states agreed to resist any measures that would undermine the Court, including implicitly the agreements being promoted by Washington. Even though some of the EU’s member states preferred to accommodate Washington’s demands, they all complied with the EU position. Meanwhile, the European Commission and Council presidency launched diplomatic démarches (a formal statement of preferences or values) in an effort to persuade other governments to reject the American BNAs.

The explanation for this failure, my research suggests, is very simple: the EU was not willing to put much of its collective diplomatic muscle behind its anti-BNA campaign. This stood in stark contrast to the willingness of the US to threaten immediate cut-offs of military and economic assistance to states that refused to sign a BNA. For example, after the U.S. cut military aid to six Caribbean states that refused to sign a BNA, the president of Guyana explained his decision to sign: “The U.S. has made it clear that they will cut off the aid. I need the military co-operation with the U.S. to continue. It is as clear as that. I can’t be more clear.” Even if the EU was not willing to condition its economic aid on compliance with its view of BNAs, it could have found other ways to reduce other states’ vulnerability to the US threats. But it chose not to do so.

This case demonstrates that the EU’s much-vaunted “normative power” is an unreliable basis for effective action in world affairs. Other actors often have policy preferences that differ significantly from those of the EU and are willing to commit material resources in support of their preferences. Unless and until the EU does the same, it will have little effect on the world order of the 21st century.

For a longer fully-documented version of the article see Thomas, Daniel C. (2012). Still Punching Below its Weight? Coherence and Effectiveness in European Union Foreign Policy. Journal of Common Market Studies, 50:3 (May), 457-474.

There is little evidence that a ‘Nordicisation’ of the EU’s Africa policy has taken place.

Hollande’s pledge to withdraw French troops from Afghanistan is not as significant as it may seem. 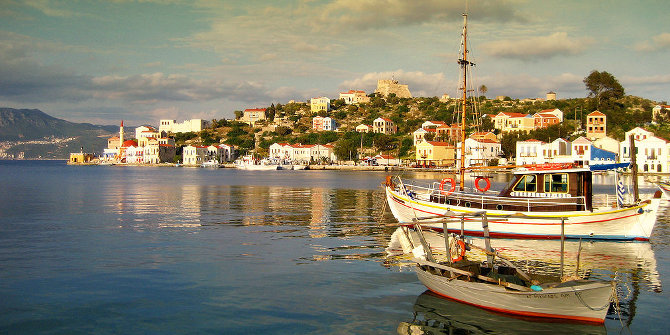