Water usage across Europe varies widely, but it is clear that we are using too much to be sustainable in the long-term. But how can Europe’s policy-makers encourage more sustainable water consumption patterns? Citing the examples of Hungary and Germany, Asit Biswas and Julian Kirchherr call upon European policy-makers to drastically increase water prices. They argue that while consumer education campaigns play a role in altering water consumption patterns, incentive pricing would be the only instantaneously effective policy tool.

Europe’s water policy is a mess. At the core of this mess is Europe’s Water Framework Directive which required that water-pricing policies in all Member States must provide adequate incentives for reducing water consumption by 2010, thus reflecting the true costs of water services. While this sounds compelling, no progress has been made in implementing this policy. 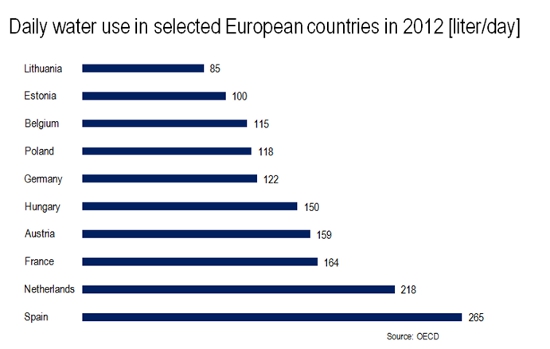 These huge consumption differences are mainly due to different water pricing regimes across Europe which European policy-makers have failed to harmonize despite the Directive. Prices range from a virtually free supply of water (e.g. for agricultural use) to almost €3.50 per cubic meter, in parts of the United Kingdom.

Such pricing matters. Pricing is the single most powerful policy tool to alter water consumption patterns and users’ behavior. Numerous studies by the European Environmental Agency (EEA) have proven that price signals have a significant impact on water use by households. Indeed, water consumption generally correlates with water prices negatively.

Take the examples of Hungary and Germany: From 1992 onwards the Hungarian government increased water prices from 0.2 Euro to 0.5 Euro per cubic meter leading to a total decline in the country’s water use of about one-third until 1996; per capita water consumption per day declined from 160 litres to 100 litres, as shown in Figure 2. Germany’s water consumption has decreased by 17 per cent over the past 20 years to 122 litres per person per day, mainly by strongly linking water prices to consumption, and also by complementary measures such as encouraging the use of water-saving household appliances and numerous consumer awareness campaigns. 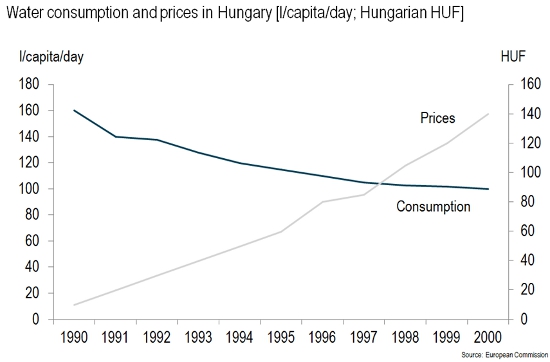 Many advocate campaigns as an easy-to-implement policy tool to alter consumption patterns and experience shows that campaigns can alter behaviour. For example, ‘shock’ anti-smoking campaigns have been effective: After highly graphic warning labels were introduced in Canada in 2010, 44 per cent of consumers considered quitting. Less visual warnings are also effective: 28 per cent of Romanians report that they have reduced their number of cigarettes per day as an effect of text-only-warnings.

However, campaigns are not likely to be a viable option to facilitate sustainable water consumption patterns across Europe. Whereas smoking endangers the very life of the single consumer, the consequences of non-sustainable water consumption are generally intangible and less drastic. Hence, no water campaign, even if it was highly creative, sufficiently large, run over a prolonged period of time and based on sound empirical evidence (the core requirements of any campaign) would ever be able to match the successes of anti-smoking campaigns. Campaigning can only be a complimentary tool at best when it comes to water policy. Increased water prices will need to lead the way.

But what are the main obstacles in implementing higher water prices? Those of the European political left who call for campaigns and oppose higher water prices often cite possible negative social effects, e.g. the potential for restricting access to such a basic commodity as water for the poor. This argument is legitimate in our point of view. Indeed, water bills already amount for a significant amount of total household expenses for the poorest percentile of the European population.

Furthermore, those of the European political left who oppose higher water prices oftentimes mistake this measure with privatisation. However, pricing is not a code word for the privatisation of water supplies. In fact, the research carried out by the Third World Centre for Water Management indicates that even by optimistic projections, by 2030, not more than 10 per cent of the world’s population will receive water from privately operated utilities. Privatisation is a niche policy tool and it is not related to the principle of incentive pricing.

Those on the European political left also tend to impose more water regulation on companies than on consumers. Companies, however, oftentimes lead the way in voluntarily adopting sustainable water consumption patterns. Take the example of Nestlé: Over the past ten years, the company reduced its waste use per kilogram of product by 49 per cent. Such progress must be appreciated when designing new water policies.

Implementing higher water prices in Europe might sound politically unpopular and unfeasible, but Europeans are far more progressive than their politicians think. Indeed, the 2012 Water Eurobarometer points out that 82 per cent of consumers think that all water users should be charged for the volume of water they use (including measures to offset possible negative social effects). Only 12 per cent disagree with this pay-more-if-you-use-more-principle, 57 per cent explicitly call for a fairer pricing policy, and 47 per cent want stricter water regulation. Implementing higher water prices is feasible.

Reducing demand for water is a central task for policy-makers around the globe: Global demand for water reached 4500 billion cubic meters in 2012. If the current trends continue until 2050, water consumption will increase by yet another 55 per cent. Today water demand outstrips water supply by 300 billion cubic meters already. Twenty years from now water demand is projected to overshoot supply by as much as 40 per cent. Europe’s Water Framework Directive already embraces the principle of incentive pricing, but it is not being implemented. If Europe’s governments implemented this Directive and focused on pricing as a tool to reduce water consumption, Europe’s water consumption would plummet and Europe would most certainly lead the way in closing this gap between demand for and supply of water.

Asit Biswas – National University of Singapore
Professor Asit Biswas is one of the world’s leading authorities on water management. He is the founder and president of the Third World Centre for Water Management in Mexico, and Distinguished Visiting Professor at the Lee Kuan Yew School for Public Policy at the National University of Singapore as well as the Indian Institute of Technology. Biswas has been a senior advisor to more than 20 governments, six Heads of United Agencies as well as the Secretary Generals of OECD and NATO.

Julian Kirchherr – National University of Singapore
Julian Kirchherr studies public policy and management at the London School of Economics (LSE) and the National University of Singapore (NUS). Prior to joining Asit Biswas as a research associate in September 2012, he served as a research assistant in LSE’s Public Policy Group. Kirchherr is the current editor-in-chief of Libertas, the magazine of the European Liberal Youth (LYMEC), and runs a career consultancy. He is primarily interested in elite theories, environmental and water policy, welfare economics, human resource management, digitalization and futurology.