Brussels blog round up for 27 October – 2 November – defeat for UK government over EU budget, populism vs. technocracy, and would independence help or hurt Catalonia’s economy?

Brussels blog round up for 27 October – 2 November – defeat for UK government over EU budget, populism vs. technocracy, and would independence help or hurt Catalonia’s economy?

The EU is due to agree its budgetary framework for 2014-2020 in November. Ahead of these negotiations, Lost in EUrope looks at disagreements over the budget. Germany and the UK want a real freeze or reduction in the budget, while the Cypriot Presidency of the Council of the European Union is proposing a compromise which cuts €50 billion from the budget. As the week continued, the Cypriot proposal was deemed too meek by the UK, according to the FT’s Brussels blog.

On Wednesday, David Cameron’s government lost an important vote in parliament over the UK’s position on the budget negotiations. Debating Europe asks whether this means the British Prime Minister should now veto the budget negotiations unless he can negotiate an overall cut. While the European Citizen calls the vote ‘depressing’; Open Europe argues that a UK veto is a credible threat which could work as a bargaining tool, and also criticises the response of Deputy Prime Minister Nick Clegg, who had argued in favour of maintaining the UK’s current relationship with the EU and abandoning plans to ‘repatriate’ powers to the national level. Meanwhile over at the Common Agricultural Policy blog, Wyn Grant suggests there is a real shift in the opinions of UK politicians toward the EU, given the increasingly eurosceptic attitudes displayed by Labour MPs.

Coulisses de Bruxelles looks at the continuing row over the two seats of the European Parliament – France is obviously keen to retain the Strasbourg seat, but many MEPs want to consolidate their work in Brussels.

Eva en Europa looks at the diverse landscape of European media newspapers and the potential for a meaningful European public space. Elsewhere, EU Logos at Blogactiv.eu looks at last week’s proposals from the European Commission to spend €2.5 billion on poverty reduction in Europe by 2020. This proposal is especially important as over 40 million people in Europe suffer from a lack of access to sufficient food of adequate quality.

The European Council on Foreign Relations says that the US-Germany relationship is on the rocks after Germany’s move towards a closer relationship with China.

Cafe Babel says that discussions about EU foreign policy were given short shrift in favour of discussions over the eurozone crisis at the recent European Council summit. They also assess recent agreements over the EU’s future relations with Israel.

Meanwhile, Debating Europe asks, “should we have a European army”?

Dr Sean’s Diary looks at the ‘politics of constrained choice’ now in place across much of Europe, as well as the current debate about populism vs technocracy. Economics Intelligence makes the case that the eurocrisis will make for a stronger Europe, saying that efforts to save the euro are far cheaper than letting it breakup. The OFCE blog, however, is much more downbeat, saying that the restrictive fiscal policies of eurozone countries will make the current recession all the more difficult to escape from.

The Liberation blog writes on Yves Mersch’s proposed spot on the European Central Bank’s Executive Board. The proposal, which was rejected by the European Parliament last week, is argued to be a mechanism for Germany to have its interests better defended in the ECB during the crisis.

This week Greek Journalist Kostas Vaxevanis released the names of more than 2,000 wealthy Greek alleged tax evaders with Swiss bank accounts – the so called ‘Lagarde list’ – and was subsequently arrested for breaching privacy. Dimitris Rapidis, writing at Blogactiv.eu finds it interesting that Vaxevanis has now been arrested when the document may have been hidden by Greek Ministers since 2010. Also in Greece, Open Europe looks at the ‘unpalatable’ ways that the likely €28 billion cost of the two-year extension to Greece’s fiscal consolidation might be paid for.

Nada es Gratis looks at the Spanish labour market, saying  it is striking that the decline in employment this quarter is shared equally between private and public employment. Later in the week, they report that half of Spanish companies have experienced an economic crime (thefts and business defaults) in the last year. They also continue the debate on whether independence would benefit Catalonia’s economy, or whether it would lead to a decrease in trade between Catalonia and Spain.

The GMF blog sings Sweden’s praises for its paid parental leave and flexible working options, which allow men and women to both have a career and bring up children. On a different topic, Beyond Brussels reports that the French media want a slice of Google’s revenue in France, as the search engine redirects their users to their website, earning Google money.

Revolting Europe says that Portugal’s banks are making large profits from the country’s government debt. Elsewhere, Lost in EUrope says that Italy has had a ‘no-Monti’ day to protest against its ‘unelected’ leader. Also in Italy, Charlemagne looks at some shock results in Sicily’s elections, with the region voting for an openly gay man as Governor (the region is identified as Italy’s most homophobic). Later in the week, the GMF blog looks at the rise of populism in Italy and the shifting political scene as Mario Monti’s technocratic government becomes increasingly unpopular.

Graph of the Week

Over at Beyond Brussels, new weekly columnist Professor Jesper Jesperson looks at the eurocrisis and growing unemployment in the eurozone: 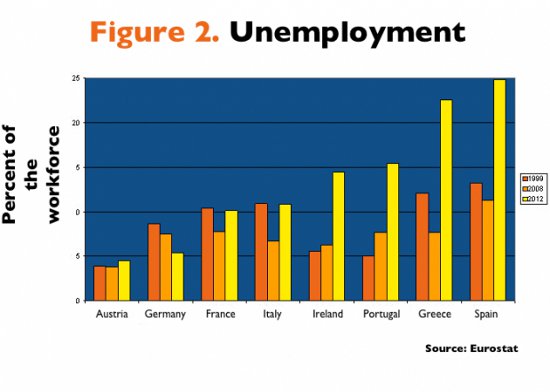 What has President of the European Council, Herman van Rompuy been up to? This week he visited Vietnam,

Digital Europe at Blogactiv.eu says that over 95 per cent of new smart-phones in 14 EU countries now have common chargers.

Brussels blog round up 1 – 7 March: Ukraine, EPP congress, and should the EU play a role in Venezuela?

Brussels blog round up 17 – 23 August: Mubarak Released, German elections, and what would Scottish independence mean for Europe?