Today is World Toilet Day, which aims to draw attention to the 2.5 billion people who live without adequate toilet facilities. Andrew Cotton looks at the effectiveness of the EU’s Official Development Assistance to sub-Saharan Africa – where around 200 million people live without access to a toilet of any sort – finding that EU aid has made a significant contribution to improving sanitation.

Within sub-Saharan Africa, 595 million people, amounting to 70 per cent of Africa’s population, do not use improved sanitation; out of these, 216 million practice open defecation, that is, they have no access to a latrine of any sort. Furthermore, the Global Annual Assessment of Sanitation and Drinking Water presents a bleak picture of the financial resources flowing to the sector: “few countries had sufficient financial resources to achieve their reported targets”.

So what have the institutions of the EU and its Member States been doing to address this sanitary crisis? It is important to take action on a number of fronts as money alone will not solve the problem: it is as much about political will and behavioural change as it is about finance and technology. To its credit, the EU has made and continues to make a significant contribution.

At the policy level, working through the EU Water Initiative, an important step forward was made with the adoption of the Africa-EU Statement on Sanitation by the African Union at Sharm El-Sheikh in 2008. This high level statement was born out of a concern on the part of the EU and the African Ministers Council on Water (AMCOW) to address sanitation as the most off-track Millennium Development Goals (MDG) target, rooted in a strong Africa led process involving AMCOW, Civil Society, the EC and EU Member States. The Statement reflects their concerns and priorities and identifies specific issues to which an Africa-EU partnership can contribute. The Statement is closely aligned with the eThekwini Declaration – the outcome of a crucial African political process that gave much stronger political visibility and commitment to the ‘Cinderella of sanitation’. This means that we have a consistent message on sanitation that sits within recognised political frameworks that encompass both EU Member States and African States. This acceptance provides a sound basis and agreed principles for individual states (both European and African) to mutually support the development and implementation of national sanitation plans in Africa.

Individually, the development policies of the major EU Member State donors do make specific references to action on sanitation, although these do not outline the nature of the future commitments. Analysis of data on Official Development Assistance (ODA) demonstrates both the significance of aid flows to the region and the extent to which that aid is targeted. For the EU donors (member states and EC institutions) for who disaggregated data are available for water supply and sanitation:

But what are the outcomes of their aid to sanitation?  We investigated country-specific financial data on the respective contributions from the government’s own financial resources and those of its donors for Burkina Faso, Mozambique and Uganda. Between 86-97 per cent of planned expenditure on sanitation comes from external (donor) sources, with EU donors being the substantive contributors. For basic water supply and sanitation the EU contributes 70-79 per cent of all ODA.

Sanitation is fundamentally a household issue and there is on-going debate about what aspects – if any – of sanitation service delivery should be subsidised. To put this in context, households on average contribute 10 times more of their own resources than do government/donors. As shown in Figure 1, below, Comparisons of the prevalence of open defecation to subsidies and unit costs can be illuminating. The number of people practising open defecation in Uganda has declined; ODA per capita is low, with very low subsidy and low unit capital cost allocations. Burkina Faso receives the highest ODA per capita of the three study countries and the population practising open defecation has increased. Mozambique lies somewhere in the middle. 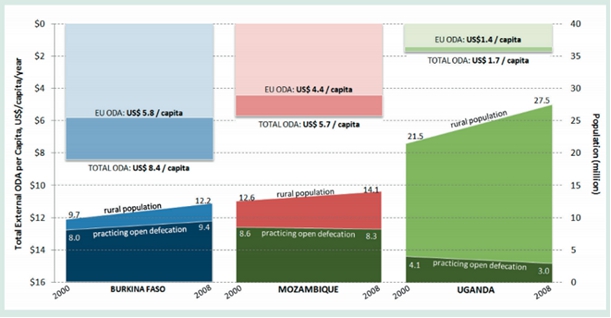 Whilst this is not suggesting direct cause-effect, it does indicate the multi-faceted complexity of sanitation. It is not just about finance: the importance of national policy and strategies for service delivery are central. The inference is that Uganda has developed relatively cost-effective ways of reducing rural open defecation given that it has zero subsidy and relatively low allocations of ODA per capita. This may of course be showing some effects due to time lag; that is, reform measures may have been put in place in Uganda that have resulted in the relatively positive situation.

The EU has been instrumental in changing the way that OECD donors can report their ODA to reflect change both in donors’ activities and in reporting needs. In particular, the off-track nature of the MDG target for sanitation has been a strong driver for reporting disaggregated data for ODA for sanitation. A proposal to revise the purpose codes for water was developed by the Africa Working Group of the European Water Initiative and was submitted to the OECD DAC Working Party on Statistics in May 2009 on behalf of the Governments of the United Kingdom and Austria with the support of the EU. The key aspect of the proposal, which was accepted, enabled donors to report ODA for water supply and sanitation separately. The purpose codes for water and sanitation were revised taking effect in 2011/12. In future it will be easier to shine the spotlight on how donors are supporting efforts to counter the sanitation crisis.

Andrew Cotton – Water, Engineering and Development Centre, University of Loughborough
Andrew Cotton is the Director of the Water, Engineering and Development Centre at the University of Loughborough. He is a Public Health Engineer with thirty years international experience in water supply and sanitation in applied research, publication, teaching and consultancy. He has an international reputation with experience of working at global, regional, national and sub-national levels in water, sanitation and urban development. He provides policy and strategy support to bilateral and multi-lateral donors, governments and NGOs. Andrew is the author of over 80 technical papers, manuals and books.