As the European recovery from the financial crisis continues to stall, Karim Maher Abadir and Gabriel Talmain assess the future prospects for European economies. Based on their own research agenda – which successfully predicted both the original recession and Europe’s delayed recovery – they argue that austerity policies are having a significant negative effect. While the situation in other countries, such as the United States, has improved, there is a very real threat that parts of Europe could experience a ‘triple-dip’ recession in 2013.

The great recession in Europe and the US was not a surprise, at least not to us. The first time we forecasted it publicly was at the first author’s inaugural lecture at Imperial College on 21 June 2007, the second being at a Bank of England seminar on 15 August 2007 before the subprime crisis hit the US. It was also not a surprise that the US would recover and that Europe would not do so for quite a while, as we stated in a public lecture at the American University in Cairo on 22 April 2009, a time when fundamental questions were being raised about the survival of the capitalist system. On 9 February 2011, at a general lecture in Cambridge, we also stated that Europe, and in particular the UK, would re-enter a recession.

And now what? Do we face the prospect of a triple-dip European recession in 2013? In our analysis of Europe, we cannot ignore what happens to the US economy. China and other new economic powers are also important, but they are not yet the large consumer markets that would drive the conclusions of our analysis, so we do not consider them further here apart from a short mention of the possible impact they may have on the inflow of savings into the US economy.

Our predictions were based on a research agenda that we started over 12 years ago, which generated a new way of looking at (and into) economic data. It is summarised, with further references, here. The aggressive response by the Fed and the US fiscal authorities to the crisis stand in contrast to the ECB which was raising interest rates as late as August 2008 (well into the crisis) and European governments that have been slashing spending in a recession as if the Great Depression of the 1930s taught us nothing. Furthermore, our research implied that gradualist macroeconomic policies would be too little and too late to put the economy on the right path: it is better to stem an injured person’s bleeding than to wait for the ambulance to arrive!

Let us consider two graphs that are particularly telling about where we stand. Both are relating to employment, one in the US and the other in Europe. They tell a tale of two continents (apologies to Dickens) with different fortunes. 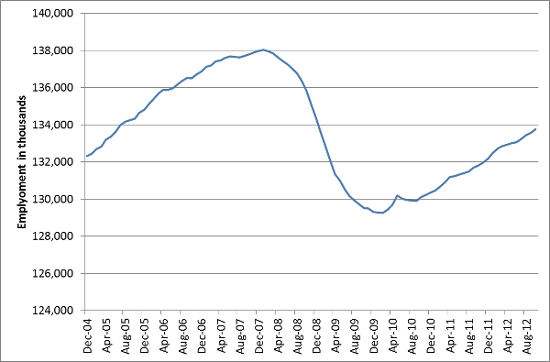 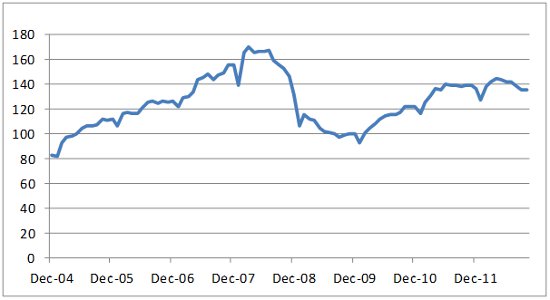 US employment has been growing in the past 3 years. On the other hand, Europe’s employment has barely budged in the last 2 years. European austerity packages are having their impacts felt. The US didn’t have one; it actually did the opposite. Recent calls by the new French government for a relaxation of these austerity measures would be a welcome step. Monetary policy has reached a stage where it will have little effect, with interest rates being at historical lows for so long and will virtually no room to go down further. The burden of restarting the economy falls temporarily on fiscal policy. In the link provided earlier, we warned in 2010-2011 that spending cuts would be premature and would lead to a second dip, which they did. We still hold this view.

The UK seems to have bucked the European trend by starting to grow again in the third quarter of this year, and is likely to do so year-on-year in the next quarter as well. But with austerity measures biting and the lack of return of consumers to the fore, we see this as an unsustainable rise. It is more likely that the UK will face a triple-dip recession, technically speaking, in the sense of seeing its growth stall again next year. The UK economy has not fundamentally changed the course of its policies enough in the past couple of years to expect any change emerging from within, and the rest of the world economy has not altered sufficiently for an outside impact to be felt in the UK. Waiting for an imported recovery is an option, but it is not one that will materialise soon.

There is another danger for Europe, an indirect one, albeit less pronounced than the one of austerity. The US recovery may stall. It is unlikely, but the two main sources for potential trouble are the totally unnecessary fiscal cliff that is a political artefact and, less imminently, the possibility of savings inflows from Far Eastern economies drying up. The latter is a more troubling prospect that could be started even by speculative factors such as a real-estate crisis. The US needs to start planning for the medium run to gradually counteract the possibility of such an event.

Karim Maher Abadir – Imperial College London
Karim Maher Abadir is Professor of Financial Econometrics at Imperial College London since 2005, where he was in charge of recruiting from 2006 then Group Head from 2007 to 2008 for Finance and Accounting academics. He has also taught at the American University in Cairo, University of Oxford, University of Exeter, and the University of York where he held a joint Chair between the departments of Mathematics and Economics from 1996 to 2005 and was the Head of the Statistics Group. He is a holder of two Econometric Theory awards and various large grants, having authored over 60 academic articles in leading academic journals and two books. He was a Founding Editor of the Royal Economic Society’s Econometrics Journal for 10 years and is an Associate Editor of many journals. He sits on the College of Peer Reviewers for many countries’ funding bodies. Karim is a founding member of the Egyptian liberal party “Al Masreyeen El Ahrrar”, and member of its Political Bureau.

Gabriel Talmain – University of Glasgow
Gabriel Talmain is the Daniel Jack Chair of Political Economy at the University of Glasgow since 2006. He has also taught at the Ecole Nationale de la Statistique et de l’Administration Economique, Columbia University, State University of New York at Albany, and the University of York where he held the Chair of Macroeconomics. He was also a Visiting Expert at the ECB 2003-2004, and has worked previously at the OECD, IMF, and International Bank for Reconstruction and Development. He was awarded various grants from the ESRC and various funding bodies, and has published extensively in the fields of economic theory, macroeconomics, and financial economics. He is currently co-editor of the Bulletin of Economic Research.