Slovenia became the thirteenth member of the eurozone when it adopted the single currency in 2007. As Luka Oreskovic writes, the country was initially held up as a success story of the enlargement process, but the economic situation has deteriorated significantly since the start of the financial crisis. He argues that while joining the eurozone is not entirely to blame for Slovenia’s current economic situation, it exacerbated existing structural problems and could prove to be an obstacle to reform.

At first glance, the eurozone crisis is still rounding up the usual suspects. Greece has narrowly passed laws conditioned by the third tranche and Spain is circling for an EU bailout request, but it might be an unlikely aid candidate and former EU poster child that tips over the EMU project.

An EU member since 2004, Slovenia has long been a success story of the enlargement process. Rising productivity and industrial output conferred it the superstar status that allowed it to bid for the replacement of its Tolar currency with the euro just three years later, joining the EMU as its thirteenth member. However, within a year, the absence of any labour, pension and privatisation reform, stagnating exports and a perpetually high deficit drove up its public debt from 22 per cent to nearly 50 per cent of GDP in under four years, as illustrated in Figure 1. It landed on the doorstep of the Troika bailout bureau. Many wondered if joining the euro was to blame for Slovenia’s decline and in turn if Slovenia’s decline would contribute to the demise of the euro. 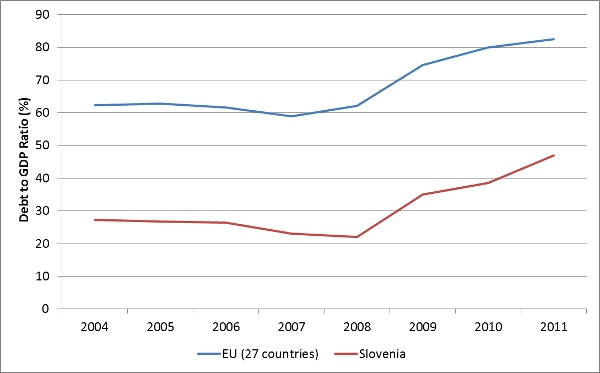 The Slovenian government’s commitment to the euro’s innocence appears to be firm, the intentions behind such resolute statements unclear. In a recent CNN interview, Slovenia’s Finance Minister, Janez Šušteršič, explicitly acquitted the euro of any blame for the current situation in Slovenia, blaming instead the financial crisis and general “uncompetitiveness”. The evidence tells another story. While joining the euro might not be the main cause of Slovenia’s current trouble; lack of sovereign monetary policy might prove the critical obstacle to cutting the Gordian knot of domestic political stalemate in the face of looming aggressive social cuts, and the fiscal reform direly needed to avoid a collapse.

The only consistent party here has been the population. Public discontent with the euro has been present ever since its adoption. The public blames it for rising consumer prices and pines for the Tolar, Slovenia’s currency since the country’s independence from Yugoslaviain the 1990s. However, consumer price hikes cannot be attributed solely to the introduction of the euro. A 2011 IMF report on Slovenia indicated that while the current ills of the economy had been exacerbated by the global financial crisis, they really stemmed from previous fiscal and financial imbalances that were brought to the forefront by easy external financing conditions. This caused a credit boom in the corporate sector and pushed up wages and social spending. Additionally, Interest rates in Slovenia dropped after Slovenia joined the euro, but spiked up in 2008 following the onset of the global financial crisis. Excess confidence over the rapid eurozone entry fueled expectations thatSlovenia could avoid reforms through the high growth observed in pre-crisis times.

The main cause of Slovenia’s current economic difficulties, however, is the postponement of any pension and labour reforms, combined with a laggard privatisation programme that failed to divest the state’s stake in the under-capitalised banks that dominate the banking sector, as well as numerous other large enterprises. During the past four years, Slovenian governments from both sides of the political aisle spent their political capital postponing reforms, destroying relations with important social partners, and making any prospect of passing reforms without a referendum highly unlikely, as GDP growth continues its negative trajectory.

While the adoption of the euro only partly contributed to the current economic difficulties, it could be the decisive obstacle to resolving the political impasse on urgent structural reforms. With the demise of the Tolar, Slovenia lost all sovereign monetary policy that would have allowed her to buffer the much-feared impact of aggressive fiscal cuts through quantitative easing. This might have enabled the government to spread the effects of the reforms and cuts over a longer period of time, staving off the widespread backlash already brimming under the auspices of various unions and opposition parties. Full implementation of reforms would lead to stabilisation, reduced deficits within the European Fiscal Discipline Pact range and eventual recovery and growth. It is of course difficult to envisage the counterfactual with much certainty, but a fellow 2004 EU entrant that held on to its currency may offer some insights. In 2008, Lithuania’s GDP plunged by 19.7 per cent, but had rebounded by the third quarter of 2009, growing by 6 per cent compared with the previous quarter. The fast recovery was supported by severe cuts to government expenditure in salaries, as well as support from the Bank of Lithuania.

So why does the Slovenian Finance Minister insist the euro is not to blame for Slovenia’s troubles or lack of solutions? A possible reason might be the fact that his conservative Slovenian Democratic Party and its leader and incumbent Premier, Janez Janša, drove the rush to the eurozone in 2007 when previously in office. He may also want to hedge his bets and retain the favour of Berlin in case a bailout package is needed. The latter might prove a wise decision, keeping in mind the brush-off Cyprus received after its populist bailout request to Moscow before Berlin. Finally, German Chancellor Angela Merkel praised Janez Janša during the elections for “leading Slovenia into the eurozone and being a great European.”

While Slovenia’s bailout might be negligible compared to the cost of keeping Greece or Spain afloat, the treatment of Cyprus offers an important precedent should Slovenia seek help from the Troika. For one, it would leave a much bigger hole in EMU’s reputation than in the European Stability Mechanism’s budget and will be avoided at all costs.Slovenia’s government must urgently find the political capital to push through the necessary reforms and put the country back on track to recovery, buffering the reform impact with extra-budgetary revenue from privatising numerous blue-chip companies still held by the state. Once a eurozone poster child,Slovenianow has to find the capacity to reform or its eurozone family might fall apart.

A No vote in Ireland’s referendum on the Fiscal Treaty might contribute to the demise of the current mindset of austerity.

A European federation of states is the only form of integration which has the chance to preserve freedom and survive shifting power relations between sovereign nations.