Europe is now stuck in a fiscal trap, brought about by the failure of orthodox economics to provide an effective strategy for economic growth.

Europe is now stuck in a fiscal trap, brought about by the failure of orthodox economics to provide an effective strategy for economic growth.

The United States has yet to resolve its “fiscal cliff”, its own version of austerity.  Dimitri B. Papadimitriou and Greg Hannsgen of the Levy Economics Institute offer an analysis of what they term the “fiscal trap.” They argue many economists and policymakers continue to misunderstand the role of fiscal policy, especially in times of economic turmoil, and have, as a result, failed to offer effective policies to repair the economies of the US and eurozone.

Why would US policymakers contemplate following Europe’s failed austerity policies by imposing spending cuts and tax increases that are widely expected to push the US economy back into a recession? Why would EU countries continue austerity policies that have not brought economic recovery? To address these questions, we present a model of what we call the “fiscal trap”: a self-imposed spiral of economic contraction resulting from a fundamental misunderstanding of the role and function of fiscal policy in times of economic weakness.

The results of austerity policies in the UK and in much of the eurozone have been disastrous. The “fiscal crisis” began when Greece, Ireland, and Portugal approached default in 2010, and this specter of default gave rise to the fiscal austerity policies instituted across the eurozone. Since 2010, fiscal policy has tightened drastically throughout Europe. Unemployment in the eurozone has reached record levels. Today, Europe is feeling the effects of a self-defeating cycle of tight fiscal policies and low growth rates. We call this cycle of fiscal reduction and economic contraction a “fiscal trap”.

The basic trap is a cycle that moves from a decline in demand to falling tax revenues, which in turn engenders spending cuts and tax increases. Spending cuts and tax increases undercut the economy further, and the cycle continues. The basic trap is illustrated by the four dark arrows at the top and centre of Figure 1. (All arrows in the figures show directions in which causality exerts itself.) 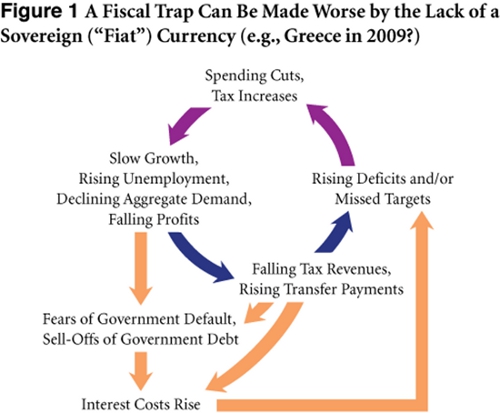 The upper pair of dark arrows in the figure illustrates “fiscal drag”. In the context of mainstream US Keynesian policymaking, fiscal drag refers to the perverse tendency (from the perspective of good countercyclical policy) of governments to engage in pro-cyclical fiscal policy, due to legal requirements or political pressure to try to achieve balanced budgets. Such ill-timed spending cuts and tax increases include most of the austerity measures adopted recently in countries around the world.

The downward pressure on fiscal stimulus exerted by an aversion to deficits is shown in Figure 1 in the movement from rising deficits to spending cuts and increased taxes. The effects of such reductions include slow growth, rising unemployment, declining aggregate demand, and falling profits. Moreover, fiscal austerity can be self-defeating, as shown by the lower pair of dark arrows. Low or negative growth feeds back into the vicious cycle of the fiscal trap by reducing government tax revenues, raising expenditures on transfer programmes, and hence increasing fiscal stress, completing the basic trap. The dynamics of the basic fiscal trap highlight the need for temporary stimulus packages in times of negative or slow growth. They also underscore the value of permanent “automatic stabilisers” such as means-tested benefits and a progressive tax code.

The full fiscal trap includes the forces illustrated by the light-coloured arrows in Figure 1. These arrows describe the part of the trap that owes its existence to a faulty currency system, such as the euro, or any other “sound money” system, including a gold-backed currency. The question of how to escape the fiscal trap is broadly answered by two competing perspectives: metallism and chartalism.

While well known to macroeconomists, other readers may appreciate a clarification of the terms. The “metallist” approach to solvency views the money supply as constrained by some outside condition. Money is based on something that has a limited supply, either because it is based on something physical (again, such as gold) or because of some constraint on the government’s ability to issue liabilities. In contrast, chartalists do not see the money supply as intrinsically constrained. This freedom allows fiscal policy to be guided only by an imperative to maintain full employment – without, of course, spurring excessive inflation. Hence, the chartalist perspective regards solvency as a non-issue for governments that possess a sovereign currency, with the understanding that they must permit their exchange rates to vary freely. These two perspectives define very different approaches to economic recovery.

In our interpretation of the European fiscal trap, the eurozone’s metallist monetary institutions play a crucial role, turning a basic trap into a full trap. Some of the more orthodox voices – for example, the Congressional Budget Office, the International Monetary Fund  and the New York Times – have underestimated or ignored the special handicap faced by national governments that are forced to operate with one hand tied behind their back; namely, these governments lack the power to create “state money.” In other words, eurozone metallists and like-minded orthodox commentators imagine that the complete analysis shown in Figure 1 is equally applicable to all nations with sovereign debt, including “sovereign currency” countries such as Canada, Japan, the United States, and the UK. But it is not.

Central banks in countries with sovereign currencies and flexible exchange rates use open market operations to keep short-term interest rates stable, and can even, given enough time, consistently hit a target for long-term yields, even when they are running up large debts. For example, the US Federal Reserve effectively set rates on longer-term Treasury debt during the late 1940s and early 1950s. More recently, the Fed’s strategy to keep long-term rates low has led to record-low average home mortgage interest rates, albeit under tightened lending standards. Figure 2 highlights the way that such central bank operations ensure that governments in sovereign-currency nations can “escape” the full-trap mechanism. The cycle of the full fiscal trap is broken when the government makes its own means of payment. This is both a prudent and a proven system, but its distinctive workings are sometimes forgotten in times of economic turmoil. On the other hand, the basic trap illustrated by the dark-coloured arrows alone can present a serious problem in cases such as those of the UK and the United States: interest rates remain very low, and capital markets remain confident in the solvency of the central governments involved, but job creation and demand for private-sector output are far too weak. 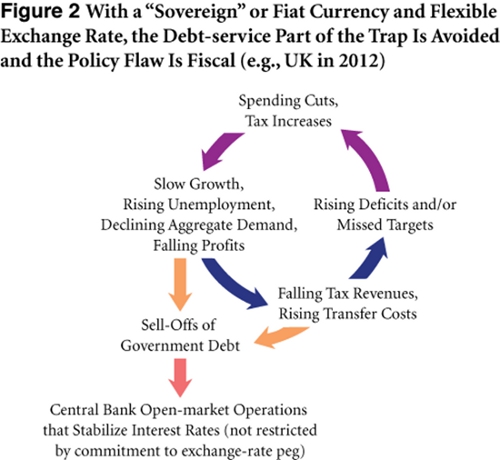 Orthodox economics, the same perspective that helped to bring us the financial crisis and the Great Recession of 2007–09, has failed to provide an effective strategy for economic growth. This perspective has steered the eurozone into a self-imposed fiscal trap and may convince policymakers in Washington to do the same. We argue for another approach. The renewed vigour seen in many heterodox economic traditions offers a better hope for effective policies that will help countries steer clear of the fiscal trap and put their economies back on a path to recovery.

This article is based on the Levy Economics Institute of Bard College Public Policy Brief, “Fiscal Traps and Macro Policy after the Eurozone Crisis”.

Greg Hannsgen – Levy Economics Institute
Research Scholar Greg Hannsgen is a macroeconomist and monetary economist, and a member of the research team behind the Institute’s Strategic Analysis series. Hannsgen’s research interests include monetary and fiscal policy issues in the United States and abroad; heavy-tailed distributions in macroeconomic data and modeling; money, finance, and the business cycle; Keynesian and post-Keynesian macroeconomics; and normative and social aspects of macroeconomic analysis.

Dimitri B. Papadimitriou – President, Levy Economics Institute
Dimitri B. Papadimitriou is president of the Levy Institute and executive vice president and Jerome Levy Professor of Economics at Bard College. His areas of research include financial structure reform, fiscal and monetary policy, community development banking, employment policy, and the distribution of income and wealth. He also heads the Institute’s Macro-Modeling Team, which is responsible for the Strategic Analysis report series. Papadimitriou is a past vice-chairman of the Trade Deficit Review Commission and served on the Competitiveness Policy Council’s Subcouncil on Capital Allocation.

If it is to survive, the eurozone can no longer hold private creditors as sacrosanct above taxpayers, and must crack down on the fiscal black hole of the EU’s tax havens.

The lesson from Cyprus is that large bank deposits are potentially at risk in other struggling Eurozone countries.