The increase in asylum seekers from the Balkans was a predictable consequence of a foreign policy driven visa liberalisation.

The increase in asylum seekers from the Balkans was a predictable consequence of a foreign policy driven visa liberalisation.

Since the liberalisation of the EU’s visa policy towards the Balkans in 2009/2010, some EU member states have become concerned at what they term a ‘dramatic’ increase in unfounded asylum claims from that region. Mogens Hobolth investigates the controversy, finding that while the number of asylum claims has increased in recent years, it was a predictable outcome for the EU’s policymakers who had prioritised foreign policy and enlargement over migration control. The concern over unfounded asylum seekers is also tenuous. It implies that the EU’s borders are open to persons in genuine need of protection but that is by no means obvious.

The Schengen countries of the European Union have recently liberalised their visa policies towards the Balkans. This decision is now facing considerable criticism from several member state governments for leading to a marked increase in numbers of unwarranted asylum seekers from the region. This criticism is interesting for three reasons. First, the increase in asylum seekers was quite predictable. Rather than complaining, EU-executives should accept the consequences of their policy choice of prioritising foreign affairs and enlargement over migration control. Second, the focus on the unfounded nature of the many new asylum claims is all very well, but also somewhat hypocritical. It implicitly suggests that the EU’s borders are open for genuine refugees. Yet the EU maintains strictly enforced visa requirements for countries where the protection need is generally clear. Syrian citizens, for example, need a visa to travel to Europe. Third, the case illustrates a broader problem of faltering minority rights protection and living standards both within and outside the union.

Most foreign citizens need a visa when travelling to the European Union. To visit friends, family, conduct business or go sightseeing they must apply for an entry permit. The common visa policy is a key part of the EU’s external border control allowing the member states to inspect travellers before they arrive on the territory. The aim is to hinder irregular migration while facilitating legal travel. This pre-screening is often criticised as creating a ‘Fortress Europe’. Yet recently a major liberalisation was carried out as visa requirements were lifted for nearly all the Balkan countries. From 2009/2010 citizens from Albania, Bosnia and Herzegovina, Macedonia, Montenegro and Serbia have been free to travel to Europe. Croatia, due to join the EU next year, has long enjoyed this freedom. Only visitors from Kosovo currently need a visa (see Figure 1 below).

Figure 1: The EU-Schengen area as of 2012 and visa requirements for neighbouring countries. 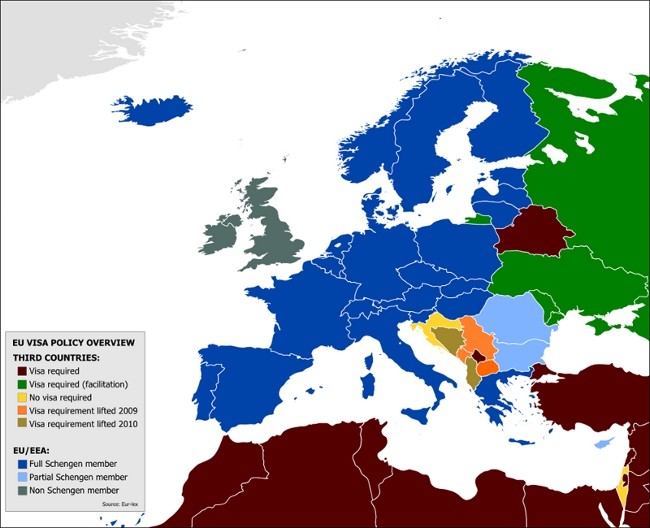 Note: A facilitation agreement reduces, in general, the fee and documentary requirements but it is still necessary for travellers to obtain a permit.

This reform has come under considerable pressure from a number of member state governments. France, Germany, Belgium, Luxembourg, Austria and the Netherlands have publicly called for visa requirements to be introduced again. They argue that the easing of travel restrictions has led to a dramatic increase in unfounded asylum claims from the region. If we look at the asylum statistics we do see a noticeable change after the liberalisation. In the last three years inflows have gone up considerably:

Figure 2: Number of asylum applications from Balkan nationals received by the Schengen countries

Note:  Kosovo is only registered as a separate country from 2009 and onwards. 2012 is a projection.
Source: Eurostat. There is a break in the Eurostat data series from 2007 to 2008 as the overall framework for collecting the information changed.

What is the story behind these numbers? Let us start by looking at how the visa requirement was implemented on the ground in the years prior to the liberalisation:

Figure 3: Number of short-stay visa (ABC and VTL) applications received and refusal rates at the Schengen states’ consulates in the Balkans 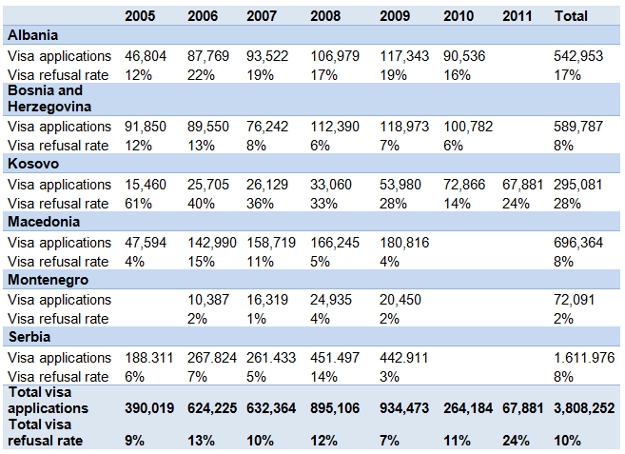 Note: ‘Kosovo’ refers to the visa processing in Pristina. Please note that data for Greece is missing for 2005 and Norway in 2009. The Schengen area was enlarged late 2007 with nine new member states and late 2008 with Switzerland.
Source: Official government visa-issuing overviews available via the European Visa Database.

As we can see from Figure 3, many citizens from the Balkans applied for a visa to visit the EU. In Serbia, the main sending country, between about 200,000 and 450,000 applications were received annually. How restrictively was the permit requirement enforced? The outer extremes are Kosovo where 28 per cent of all applications were refused and Montenegro with only 2 per cent declined. In between these we have Albania at 17 per cent and Serbia, Macedonia and Bosnia and Herzegovina at 8 per cent. These numbers suggests that concerns about irregular migration from the region were considerable, albeit varied.

In this perspective, it is not surprising that asylum inflows did pick-up after the visa liberalisation, and the increased number of arrivals appears rather predictable. This suggests that the decision to open borders was driven by EU foreign policy and enlargement interests overriding, at least to some extent, migration control considerations. If so, governments should stand by their decision and accept that enlargement can, at least in the short-term, have consequences in other policy areas.

A part of the criticism voiced by EU executives concerns the unfounded nature of most refugee claims by Balkan citizens. In 2010, for example, the overall recognition rate for Serbian asylum applicants was 2.5 per cent. Very few Serbians were thus found to be entitled to protection. This indicates that many move for economic reasons and not because they have a warranted fear of persecution. The government critique thus appears to have some basis. Yet at the same time it is somewhat tenuous. The focus on ‘bogus asylum seekers’ indirectly suggests that applicants would have been welcome had they been genuine refugees. However, when we look at the EU’s border policy towards war-ridden countries such as Syria and Afghanistan, where the need for protection is arguably considerable, visa requirements are in place and enforced strictly. That in turn makes it in practice very difficult to arrive legally in Europe and claim sanctuary.

If individual persecution is not the main driver of asylum seekers from the Balkan countries then what dynamics are at play? The graph below details the monthly arrivals:

Figure 4: Monthly inflow of asylum-seekers from the Balkans to the Schengen area. 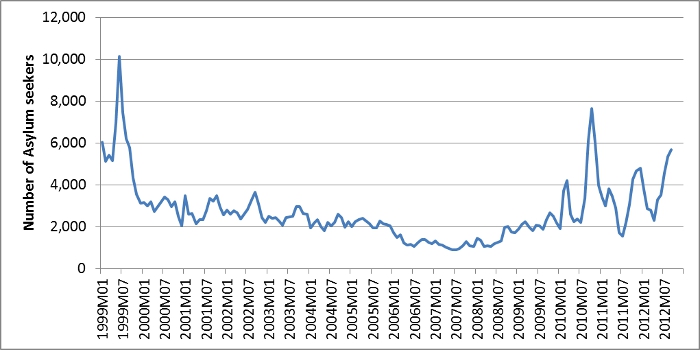 When we look at Figure 4, we see the general increase in numbers, but also a change in the monthly pattern after the visa requirements were lifted. There are now clear seasonal peaks with most arrivals occurring in winter months. A similar trend can be found in earlier years but it is much less clear-cut. The European Commission, referring to a study by the EU’s border agency Frontex, states that the asylum applicants seek to escape poor education possibilities, limited health care access and unemployment. In addition, the seasonal pattern suggests that inadequate housing might also be a pressing concern during winter. Most applicants are found to be Roma, a minority often facing considerable problems of social marginalisation and discrimination. Better inclusion and protection of minorities is a central part of enlargement requirements, but also a challenge within existing EU member states. The case of Balkan visa liberalisation thus also reminds us of on-going challenges in implementing and upholding minority rights throughout Europe.

London’s Olympics show that the links between sports, citizenship, politics, and national identity are as tangible as ever

Greece, Portugal, Spain and the East European states take on less than their fair share of responsibility for EU asylum seekers.

9 out of 10 European employers are no longer investing in training. Governments need to encourage them to invest in this area before Europe faces a massive skills deficit.