The granting of territorial autonomy in the Balkans means that large scale violence is now near-impossible. But small scale conflicts continue.

Since the conflicts of the 1990s, various regions within the Balkans have been granted territorial autonomy in order to avoid further violence. Soeren Keil assesses the strategy, finding a great deal of variety in the implementation and effectiveness of territorial autonomy and power sharing across the region. While in most cases the likelihood of violent conflict is now very small, secessionist movements have been encouraged and functional states have not been created.

Territorial autonomy and local self-government has become one of the key strategies for conflict management in ethnically divided societies. From Ethiopia to Afghanistan, and from Belgium to Iraq, territorial decentralisation has been used to ensure that different ethnic groups are able to rule over their own affairs and enjoy a high degree of autonomy, while power-sharing has been implemented simultaneously in central institutions to guarantee decision-making by consensus.

Bosnian Serbs continuously point out that their existence in Bosnia is only protected through the high level of autonomy that was granted to their entity in the Dayton Peace Agreement and that any further centralisation would result in a danger that their group might be dominated by Bosniaks. The arguments of Bosnian Croats for a third entity are very similar; they protest that the Federation of Bosnia and Herzegovina, which they “share” with the Bosniaks in fact disadvantages them and they therefore require their own territorial unit with the same level of autonomy as the Republika Srpska and the Federation.

In Macedonia, Albanians are becoming more and more frustrated with the ethnic Macedonian elite, because of the continued discussion on the name of the country with Greece, which has resulted in a Greek veto to Macedonia’s entry into NATO and to the start of membership negotiations with the European Union (EU). Albanians feel that their concerns are not taken into account and that they are taken hostage by an increasingly nationalist government in Skopje. While the Ohrid Framework Agreement, that ended the violent insurgency in Macedonia in 2001, stated in Article 1.2 that “there are no territorial solutions to ethnic conflict,”Macedonia has nevertheless implemented a high degree of decentralisation. Nevertheless, new tensions among Albanians and Macedonians have resulted in Albanian demands for a complete federalisation of the country.

Finally, Northern Kosovo remains the most volatile area in the Western Balkans and conflict between local Serbs and Kosovo security forces can erupt at any time. All territory north of the Ibar river remains controlled by local Serbs and out of reach for the government in Priština. Discussions about the re-integration of Northern Kosovo into Serbia are ignored by the Kosovo government, but it is generally clear that whatever solution will be found must involve a high degree of territorial autonomy for Northern Kosovo. 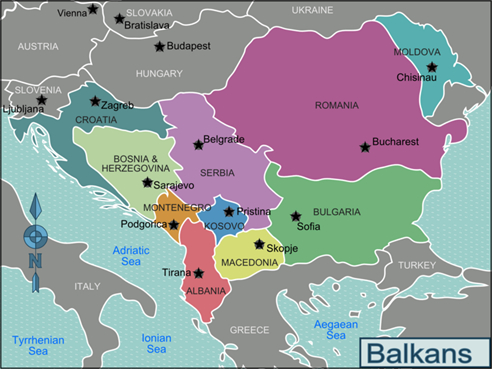 By Peter Fitzgerald (Own work based on the blank worldmap) [CC-BY-SA-3.0 (http://creativecommons.org/licenses/by-sa/3.0)], via Wikimedia Commons http://wikitravel.org/en/Balkans

Southeastern Europe is a good example that demonstrates the strengths and weaknesses of territorial autonomy in ethnically divided societies. While autonomy is generally seen as a tool to protect minorities and their language and culture, by providing them with far-reaching decision-making competences in their territorial unit(s), it can also serve as a first step towards independence, equipping different ethnic groups with the institutions and resources to push for eventual secession. The success of decentralisation in Macedonia and Southern Kosovo can be contrasted with the failure of similar arrangements in Bosnia and Northern Kosovo.

We should not be too critical with these arrangements and their results. It is important to note that territorial autonomy as a tool of conflict management was used mainly by external actors in the three cases discussed above. Bosnia’s Constitution was written by the US State Department and the modification of its complex federal system has been the result of high level international intervention, through the Office of the High Representative. Kosovo’s first Constitutional Framework was written by UN lawyers and its current Constitution is heavily based on the Comprehensive Status Settlement presented by Martti Ahtisaari, the former Finish President in 2007. American and European lawyers and politicians also played a key role in the negotiations that led to the Ohrid Framework Agreement in Macedonia. The three cases are therefore good examples of “International Intervention and Statebuilding” and territorial autonomy was a key strategy by international actors to bring an end to the conflicts and ensure the restoration of peace. Moreover, territorial autonomy was seen in all three cases as a tool of state building to ensure the continued existence of the three states within their borders and to ensure that decisions could be reached by consensus where required and otherwise give autonomy to the different ethnic groups.

Are there any lessons to be learned from looking at Southeastern Europe? Some learning among local and international actors seems to have taken place, because the degree of territorial autonomy is very different between Bosnia (a fully federal system), Macedonia (limited decentralisation) and Kosovo (high level of decentralisation but no federal system). Some of the problematic elements implemented in Bosnia, such as the high level of financial independence of the territorial sub-units, have not been implemented in Kosovo and Macedonia. The degree of autonomy has also changed so that attempts of secession are very unlikely in Macedonia and Southern Kosovo. However, the developments in Bosnia and Northern Kosovo demonstrate the main flaw of all power-sharing and territorial autonomy agreements in the three states. Fundamentally, these three countries remain internally and externally challenged. Bosnia’s Serbs regularly threaten a referendum on secession, Northern Kosovo is de facto independent from the rest of the country and the Albanians in Macedonia also question the existence of the state and their role in it. Furthermore, Bosnia remains challenged by Serbia, which continuously supports radical Bosnian Serb policies that undermine the Bosnian state. The name dispute with Greece undermines Macedonia’s international standing and Serbia continues to work hard to avoid the recognition of Kosovo by other countries.

For territorial autonomy, the glass is half-empty rather than half-full. While large-scale violence has become near-impossible in the region, smaller conflicts will continue to occur. While the arrangements for territorial autonomy have contributed to some transformation of the conflicts into political disagreements rather than violent conflicts, they have however failed in establishing functional and saturated states. This is also a failure for those international actors involved in statebuilding and conflict management in the Western Balkans.

This article is based on Soeren Keil LSEE lecture “Territorial autonomy as a form of conflict management in South Eastern Europe” on 11 December. Click here for more details and to listen to a podcast of the event.

Soeren Keil – Canterbury Christ Church University
Soeren Keil is a Lecturer in International Relations at Canterbury Christ Church University. His main research focuses on institutional design in post-conflict societies, including the Western Balkans. He is especially interested in power-sharing models in divided societies, as well as forms of territorial and non-territorial autonomy for minority nations.