This July, Croatia is set to become the EU’s newest member state. EU accession will bring with it access to structural and cohesion funding to enhance economic development. However, as Luka Oreskovic writes, there is a danger that Croatia’s government, administration, and private sectors may lack the capacity to absorb this funding, as has been the case in other new EU states in Central and Eastern Europe.

Croatia is set for EU entry on July 1, 2013 – a date that many public officials have enshrined in the public’s mind as the coronation of almost decade-long national efforts and negotiations to earn EU membership, a coveted status in Southeastern Europe. Recently, however, the preparedness of the Croatian government, administration, and the private sector for absorbing the EU structural and cohesion funds (SCF) that it will gain access to after accession has been questioned. For many of the country’s political, social and industry leaders the date has now become a symbol for anxiety and stress.

The Croatian economy has had a rough ride since 2008. Croatia experienced negative GDP growth in 2012, alongside falling levels of Foreign Direct Investment, and has recently had its credit rating downgrade to ‘junk’ status by Standard & Poor’s (S&P). EU structural and cohesion funds are widely hailed as the last straw to grasp if any recovery of economic activity is to happen in 2013. Apart from improving cohesion and integration into the EU’s economic and political system, the funds will also play a crucial role in the current center-left government’s recovery plan as the only certain external financial factor in the year to come. Nevertheless, it is far from certain that EU funds will spur a recovery in Croatia, as shown by the SCF absorption records of other EU members.

Poland, a 2004 EU entrant, is a shining example of the vast benefits EU funds (SCF, in particular) can bring if the opportunity they present is approached and managed the right way by governments. In the 2007 to 2013 period, Poland has received almost €68 billion in SCF funding and is hoping to further increase the amount it receives under the 2014-2020 EU budget, which is currently being negotiated. Often praised as the only EU member to have avoided a recession in the post-2008 period, Poland’s strong economic performance has been aided by its appropriate management of EU funding. Strong leadership and experience in the field of regional development seems to be the key to Poland’s EU funds success story. Poland’s regional development minister, Elżbieta Bieńkowska, has been a star in the Tusk government’s economic team. Described as an effective administrator with experience of managing development funds in local government, she has overseen an impressive 80,000 completed projects during her first term in office.

Croatia’s current government is on the right track as far as its strategy for EU funding management goes. The government’s regional development minister, also serving as Vice Premier, is Branko Grcic – former dean of the coastal city of Split’s Faculty of Economics. Prof. Grcic’s field of specialisation is regional development – the topic of his doctoral thesis – indicating that the government has taken expertise seriously in developing its strategy. Although knowledgeable leaders in this sector are in short supply, good leadership does not guarantee success in absorbing EU structural funding as factors like administrative hurdles, bureaucratic torpidity, corruption and lack of applicant experience in EU funding tenders stand in the way. These factors can undermine the benefits to be acquired from EU funds, as the experience of Romania illustrates.

After its 2007 accession, Romania was entitled to €20 billion in structural funds yet failed to make good on this opportunity. With an absorption rate of a mere 9.7 per cent to September 2012, it holds the record for the lowest utilisation of structural and cohesion funds among EU member states, as shown in Figure 1, below. Reports of corruption and irregularities already caused the European Commission to withhold funds from Romania over investigations of the mismanagement of funds in the human-resources development sector. Besides issues of general administration and corruption, there are other reasons for Romania’s failure. These are primarily the limited access to information and lack of motivation among the target beneficiaries for EU funds, as well as the state’s administrative incapacity and grave inexperience in dealing with EU institutions. 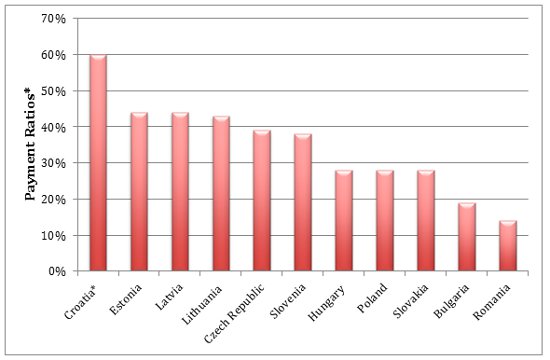 *Croatia figure is absorption rate for pre-accession assistance to December, 2012
Note: Payment ratio is based on combination of EU and national public contribution
Source: KPMG

Romania’s case holds important lessons for Croatia’s post-accession funds strategy. The rationale behind the recent S&P downgrade for Croatia’s loss of investment grade points to a structural hurdle that also limited Romania’s EU funds absorption – an intruding and inert administration. While corruption has declined in recent years as anti-corruption efforts put former ministers and a Premier in prison, limited knowledge of EU institutions and application process as well as lack of motivation have all been identified as possible, if not likely impediments. Romanian politicians have repeatedly identified increasing EU funds absorption as the government’s priority this year – a message the Croatian government repeated in unison as its goal for 2013. Still, recent results indicate that Croatia might still be headed Poland’s way.

The past six years have seen the absorption of €300 million of pre-accession funds in Croatia, or 37 per cent of the total allocated. Vice Premier Grcic’s ministry has boosted this by €150 million in the last 12 months, making the total absorption rate now just over the 60 per cent mark. Although this increase is a significant accomplishment, the pre-accession funds are a minor challenge in comparison with the opportunity offered by EU structural funds – an opportunity vital to Croatia’s prospects of economic recovery.