The post-war period has seen dramatic changes in the UK’s foreign and diplomatic policies. Covering five decades of representing the UK, David Hannay’s memoir explores the evolution of these policies and their successes and failures. Ben Tonra finds the book to be a detailed, insightful and engaging analysis from a well-placed diplomat. 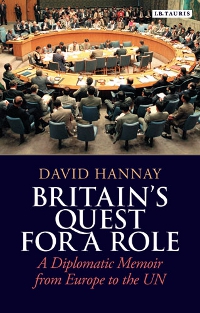 Britain’s Quest for a Role: A Diplomatic Memoir from Europe to the UN. David Hannay. IB Tauris. October 2012.

As a former senior British diplomat in Brussels, Washington and New York, the reader comes to David (Lord) Hannay’s book with high expectations. The hope is not just to get a peek behind the fly curtain of diplomatic drama but also to smell the sweat and the greasepaint.  However, Lord Hannay goes to some effort to dampen our hopes. He acknowledges that the genre of diplomatic memoires is generally oversubscribed in number and banal in content. He notes that he kept no contemporaneous diaries on which to rely for his analysis and vignettes  and finally he boldly asserts that he has no intention of betraying what he later calls the ‘invisible bonds’ among public servants and with elected politicians. Certainly, no (un)diplomatic ‘kiss-and-tell’ is promised. Unwittingly too, the author strikes some peculiar notes as when he dedicates his book to ‘…all those members of Britain’s diplomatic Service, their wives and families…’  (emphasis added but hardly necessary), a point he repeats in the transcript of his final address to colleagues at the UK PermRep in Brussels.

Notwithstanding the above, the book gradually and imperceptibly rewards its reader with an insightful, occasionally self-critical and ultimately engaging analysis of post-war British foreign policy surveyed from the crow’s nest of two of Britain’s key multilateral fora; the European Union and the United Nations.  It is structured chronologically based upon the evolution of his diplomatic assignments; from language training in Persian and his assignment first to Tehran and then Afghanistan, through his assignments in the British Permanent Representation in Brussels, in Whitehall, to Washington DC and finally to the UN in New York. Later projects such as the UK Special Representative for Cyprus and member of the UN’s High Level Panel on Threats and Challenges are also dealt with in some detail, as is his work in the British House of Lords and various post-retirement corporate and civic activities.

Hannay’s personal narrative criss-crosses many of the major political and diplomatic events of the period: the early instability of Mohammad Rezā Shāh Pahlavī’s reign in Tehran, British accession negotiations to the European Communities, the oil crises of the 1970s, European budget battles under Margaret Thatcher, the end-game of Cold War politics, the (false) dawn of new world orders and intractable security dilemmas in the Middle East, Africa and Europe. Throughout, Hannay’s engagements are measured and his reportage scrupulously fair and balanced. He acknowledges both successes and failures and is especially fascinating when recounting opportunities that were lost, whether on Iraq, Rwanda, Bosnia or Cyprus. While he never transgresses the ‘invisible bonds’, noted above, he is frank in his assessment of key actors in these many dramas.

Lord Hannay’s writing style is easy, accessible and erudite. His (and his editor’s?) failure to offer translation of non-English quotations does however leave the monolingual reader somewhat at a loss to appreciate a few examples of diplomatic legerdemain. He is also brave enough to provide complete transcripts of several official valedictory notes written at the close of key diplomatic assignments. This is a true test of a diplomat’s mettle – to what extent is his analysis prescient or naïve?  In the cold and unforgiving light of 2012, it is remarkable how well they stand up – political boilerplate and ambassadorial praise and tributes notwithstanding. His warnings against hubris on the part of both the EU and UN are especially well taken.

The motif of Hannay’s book is a partial response to US Secretary of State Dean Acheson’s 1962 comment that Britain had lost an empire but not yet found a role. For Hannay there remains resonance in that accusation but one which fails to appreciate the journey that British diplomacy has made from being one of ‘The Big Three’ to being a key middle power with a critically important European engagement, a special relationship with the US and an imperial history which, for good and ill, continues to resonate in many bilateral relationships.

A core recurring theme in the book is Britain’s fractious relationship(s) with and within ‘Europe’. Hannay has no time for ‘little Englanders’ and the withdrawal lobby and his post retirement involvement in various European think tanks and civic groups might easily be dismissed as the Europhile silhouette of an ex UK Foreign and Common wealth Office mandarin. Such an assessment would be an error. Hannay offers a self-critical analysis of Britain in Europe which laments lost opportunities but which is also frank about British strengths and weaknesses in Europe and Britain’s role in Europe’s successes, most especially enlargement and the single market programme.  In one passage – which can only be read in the context of the current euro-area crisis – Hannay relates his satisfaction with the UK’s ‘fire-break’ strategy on EMU. This allowed the British Government to engage in the design of EMU without committing to its own participation. He notes – without a hint of irony – that this strategy forestalled “elaborate, centralised decision-making on budgetary and fiscal matters”; precisely the structural weaknesses now attributed to the euro-project and which are only now being remediated in consecutive crisis-meetings among euro zone members.

The conclusion of the book is perhaps less than wholly successful in tying together the many threads of a varied and high profile career across many different dossiers.  It does allow, however for some thoughtful reflections on Britain’s place in the world, in Europe and with respect to the United States:  where ‘a’ special relationship exists but where ‘the’ special relationship is presented as a frequent obstacle to effective bilateral diplomacy.  Hannay highlights the extent to which relationships with Europe and the US are interdependent and often even mutually reinforcing, helping to maintain the global reach of British interests.  It is his evident ambition that this should continue to be so.

The Irish Presidency of the Council of the EU has shown that serious decisions on European security and defence still need to be made.