Parliamentary elections are due to be held in Italy on 24-25 February. As part of EUROPP’s series of articles previewing the election, Gianluca Passarelli assesses the prospects of one of Italy’s most controversial parties: Lega Nord. He notes that the party, which advocates regional autonomy for much of Northern Italy, has experienced a substantial increase in support over the last three years, but that infighting and leadership disputes have threatened to undermine its electoral gains.

Lega Nord (Northern League – LN) will compete in the next Italian general elections at a crucial moment in its history. After the party’s participation in the third government led by Silvio Berlusconi (2008-2011), and its opposition to Mario Monti’s ‘technocratic’ government, the LN has renewed its deal with the centre-right. The party’s political alliance with the Popolo della Libertà (People of Freedom – PdL), the centre-right party led (or perhaps it is better to say ‘owned’) by Berlusconi, might represent a fatal embrace.

The 2013 election will be a decisive test for the LN’s survival. According to the most recent polls it is very unlikely that the LN – together with Berlusconi – will win the elections, so the main issue is what sort of performance the camicie Verdi will be able to realise. Moreover, alongside the general election, there will also be regional elections in Lombardy (the region of Milan), an area which has historically been the LN’s electoral stronghold. The result in Lombardy will be crucial for both the general election outcome and the LN’s destiny. The Italian electoral law adopted in 2005 states that seats in the Italian Senate are attributed by region. As a consequence there could be different parliamentary majorities in the Senate and in the Chamber of Deputies (where the seats are allocated nationally). Victory in Lombardy would therefore allow the LN, and the centre-right, to play an important role in the next parliament. 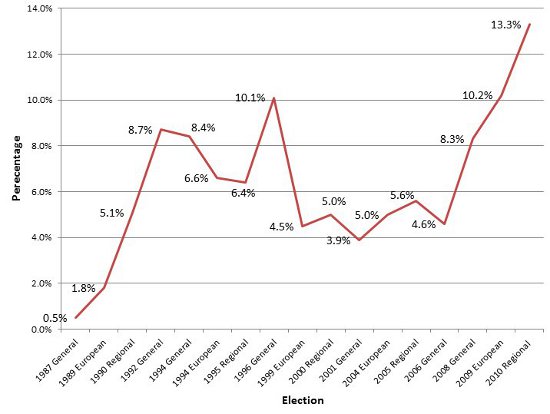 In terms of the party’s internal organisation and leadership, the election results in Lombardy will play a significant role in determining whether Roberto Maroni, the LN’s governor candidate in the region, maintains his position as party secretary. Indeed Lega Nord’s founder, Umberto Bossi, has explicitly stated that Maroni may lose his position should he fail in his bid to become Lombardy governor.

The party faces a number of challenges due to several dramatic and deep changes that have occurred within the last three years. First, as illustrated in Figure 1 above, the LN’s electoral trend since 2008 has been extremely positive and the party has expanded its influence even in “southern” regions, where it was historically less established. However, after the regional elections of 2010 – where they achieved the extraordinary result of receiving 13 per cent of the votes – the party’s national leadership has suffered a spectacular breakdown.

Between 2010 and 2012 the struggle between different party factions culminated in the replacement of the (until then) ever-present Bossi as party secretary. The process of transition has been possible only because of judicial affairs involving the Bossi family, in particular his son Renzo, as well as the party’s treasurer. The latter was investigated in relation to the personal use of public party financing. These political and judicial events involving the so-called ”magic circle“ (il cerchio magico) – the political and personal inner circle of Bossi’s leadership – have had a significant impact on Lega Nord’s internal organisation. They accelerated the transition within the party between the leadership of Bossi and those allied with Maroni.

Party change has also become clearly visible not only on issues and policies, but also with respect to politics, especially in terms of a notable shift along the “left-right” continuum. The LN’s voters, alongside its activists and politicians, have radicalised their positions in recent years: moving from an intermediate “centrist” position, to occupy the far-right. Data from both national and European mass surveys provide additional support for this ideological movement, and the accompanying changes on issue positions (immigration, democracy, civil rights, European integration, and politics) indicate definitively that LN voters have moved further to the right, as shown in Figure 2 below. 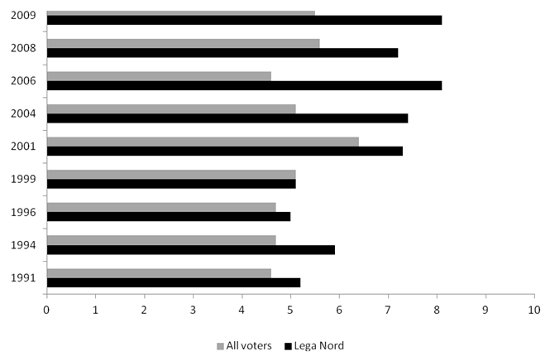 Lega Nord and the 2013 Elections

The party’s political and electoral perspectives are complex and challenging. The new leadership has brought about significant change in terms of candidatures, political personnel recruitment (a sort of closed primary has been held), and issues, but all this could still fall short of what is required to achieve electoral success. The alliance with Berlusconi and the presence of another “populist” competitor in the shape of Beppe Grillo’s Movimento 5 stelle (M5S – 5 Star Movement), represent the two biggest challenges for Lega Nord. The new slogan, Prima il Nord! (The North first!), coined by Maroni, clearly represents an attempt to move beyond the period of Bossi’s leadership, when the party mostly (but not exclusively) focused on the identity of northern regions (the so-called Padania) and on the related project of independence.

The Maroni programme is mostly founded upon the attempt to stress the crucial role of Northern regions in the Italian economic system, and to (over) represent the stakeholders and the citizens of those areas. Together with this partially innovative campaign that underlines the economic crisis, unemployment, and the problem of small businesses, the Maroni strategy seeks to replace the old cliché of LN-racism and the defence of a sub-national identity. The official video of the 2013 electoral campaign offers an implied attack against Southern Italy (in the North people wake up first…) and immigrants (in Northern regions the healthcare system takes care of everybody … even immigrants).

If Maroni is elected as governor of Lombardy, the party would have reached its goal of controlling the three most important regions in Northern Italy (Lombardy, Piedmont, and Veneto): a long-term aim of Lega Nord, and a nightmare for other parties and for European diplomacy. The LN’s proposal for Northern regions to retain 75 per cent of tax revenue represents, in essence, an act of ‘soft secessionism’, even though Maroni and the party’s leadership present it as a pan-European position in which the Eurozone would contain only regions in the North of Italy. The elections on 24 February will prove conclusively what ideas the Italian and Lombard voters support.

Gianluca Passarelli – Sapienza University of Rome
Gianluca Passarelli is an Assistant Professor of Political Science at the University of Rome “La Sapienza” where he teaches Political Science and Comparative Politics. He is a researcher at the Carlo Cattaneo Institute and member of Italian National Elections Studies (Itanes). His research interests are related to presidents, parties, electoral systems, elections, and electoral, behavior. He is author of: Lega & Padania. Storie e luoghi delle camicie verdi (2012, Il Mulino, with D. Tuorto) and Presidenti della Repubblica (editor) (2010). Among his publications are articles appearing in French Politics, Political Geography, Journal of Modern Italian Studies, Modern Italy, and Polis.