New Eastern Europe looks at the retrenchment of the latest EU budget on commitments to its Eastern Partnerships. They suggest that Central Europe is now likely to receive greater investment than Eastern Europe. Meanwhile, Open Europe says that there is a great deal of consensus among MEPs to renegotiate the budget when it comes before the European Parliament.

Revolting Europe profiles Iceland’s reaction to the economic crisis, claiming that it has ‘sterilized’ its financial sector, so that it is now small enough not to fail. Meanwhile, the FT’s Brussels blog looks a the state of EU negotiations for a cap on bankers’ bonuses.

Lost in EUrope says that a victory by Silvio Berlusconi in this weekend’s Italian elections may be enough to spook the markets and trigger the European Central Bank to start a bond purchase programme.

Despite cautious market optimism about the euro, Open Europe warns against any premature declarations that the eurocrisis may be over. Karpfenteich at Blogactiv.eu looks at the euro’s recent appreciation against the dollar and the yen. Coulisses de Bruxelles looks at Germany’s u-turn on the possibility of ‘Grexit’ last year, saying that after three years of dithering, Angela Merkel now supports Greece.

As Europe’s horsemeat scandal rumbles on, UK MEP Glenis Willmott at Blogactiv.eu writes calling for companies to specify to their customers the country of origin of the meat that they use. Lost in EUrope says that the scandal is one of the things that is fuelling growing German anger towards the EU.

A Fistful of Euros takes an in-depth look at Spain’s ‘self-perpetuating’ economic contraction, one that has resulted from a lack of reform to the county’s pension system and measures to restore export competitiveness. Nada es Gratis similarly wonders if Spain is doomed to high rates of unemployment for years and years, while The Political Bouillon comments on growing concerns that political pressure is being placed on Spain’s journalists.

As Italians prepare to go to the polls this weekend, Charlemagne looks at the curious methods some in Italy are resorting to circumvent that country’s ban on polling in the two weeks prior to the election. Meanwhile, the European Student Think Tank profiles centre-left candidate Pier Luigi Bersani who may well become Italy’s next leader. Open Europe says that it is a sign of the times that a vaguely anti-euro politician (in the form of comedian Beppe Grillo) may come second in the election.The GMF blog, citing Italy’s rampant clientistic structure with many lobbyists and other interest groups wielding influence, wonders: will Italy win?

The FRIDE blog looks at the possibility for an EU-India free trade agreement being signed this year, after six years of negotiation, and Con Acento Hispano at Blogactiv.eu has more on the potential for an EU-US free trade deal. Meanwhile, Fresh Thinking at Blogactiv.eu says that a potential trade deal with the US is not enough; more structural and progressive policies to boost aggregate demand are needed.

Andrew Wilson, writing for the European Council on Foreign Relations, discusses the upcoming EU-Ukraine summit, to be held on 25 February. He argues that there is little hope for any concrete progress being made beyond the measures already agreed in their previous summits. New Eastern Europe looks at the current difficulties in improving relations between Poland and Russia, especially after recent disagreements over visa issues.

Robert Skidelsky, writing at Project Syndicate, looks at the ‘rise of robots’ in modern manufacturing. Going back to the Luddites in the 19th century, technological improvements have raised concerns that automated machinery could replace workers and lead to unemployment. He argues that while this is a legitimate concern, it could be addressed by changing our thinking about how workers should be paid. Finally, Federal Europe at Blogactiv.eu looks at the growth of Europe’s online communities, and how they are bringing people closer together in real life.

Meanwhile Chris Dillow at Stumbling and Mumbling writes on the idea that a ‘happy worker is a productive worker’. Despite seeming like a ‘vomitorious cliche’, he notes that recent experiments at the University of Warwick seem to back up the theory in practice. On a completely different topic, Simon Wren-Lewis, writing at Mainly Macro, has an interesting discussion of Ricardian equivalence: the idea that consumers will respond to a tax cut by saving the full amount, and not spending any of it.

Nada es Gratis has a stark illustration of the ongoing problems in the Spanish housing market. The graph shows the number of property transactions taking place in Spain since 2004: 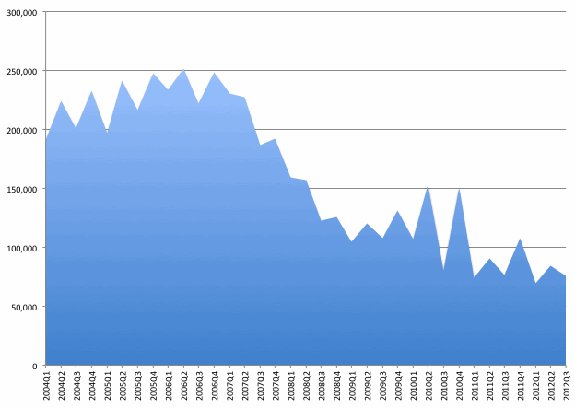 Open Europe looks at who the ‘best Europeans’ are. According to a recent survey, Romania, Estonia, Cyprus, the Czech Republic and Lithuania come out on top.

Brussels blog round up 15 – 21 March: Parisian smog, homophobia in Spain, and could Ukraine split in two?