Few people today would admit to being racist, or to making assumptions about individuals based on their skin colour, gender, or social class. In this book, Geoffrey Beattie asks if prejudice is still a major part of our everyday lives. Beattie suggests that implicit biases based around race are not just found in small sections of society, but that they also exist in the psyches of even the most liberal, educated and fair-minded of us. Eona Bell finds the book a convincing account of the importance of psychological research in understanding a phenomenon which has very real, and often devastating effects on the life chances of people in stigmatised social groups. 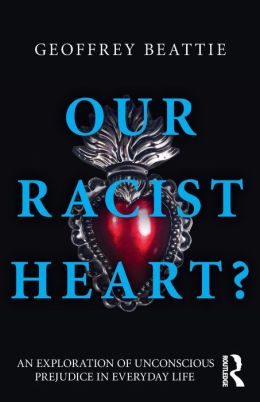 The publication of this book is certainly timely, given the findings of a recent report by the University and College Union, based on statistics from the Higher Education Statistics Agency, which revealed the shockingly low representation of women and Black and Minority Ethnic (BME) people in professorial posts at UK universities. Significant gender and race pay gaps were also uncovered. While the existence of such inequality will come as no surprise to many, the raw figures are startling and have already prompted wider media debate around the issue.

Geoffrey Beattie, a one-time resident psychologist on the TV show Big Brother, and formerly Professor of Psychology at the University of Manchester, has written extensively on non-verbal communication, among other subjects. In Our Racist Heart? , he enters the discussion of prejudice with a book which starts and ends with a focus on racial bias in academic recruitment panels. However, he expands the field to give a much broader account of the psychological processes which lie behind discriminatory practices more generally.

The key argument is that, regardless of the liberal and open-minded attitudes we may consciously hold, we all have unconscious biases which can lead to prejudice in our interaction with other people. Beattie sets out the history of social psychological research on prejudice, before presenting some new experimental approaches designed to uncover the implicit preferences which underlie our everyday actions.

Beattie has written extensively in the press, and in published memoirs, about his own life, including his post-war childhood in a Protestant working-class area of Belfast. Extracts from some of these earlier publications are reproduced in Part I of this book. The vividly descriptive narrative style and characterisation of this section will broaden the appeal of the book to general readers. The author establishes his credentials as one who can write about prejudice on the basis of first-hand experience – in his case because of accent and family background rather than race – and argues that we should “never assume that men with white skin in grey suits have not themselves been subject to implicit biases.”

In Part II Beattie delves further into the idea of an unconscious system of thinking and decision-making which operates independently of our conscious minds. He cites the work of pioneering social psychologists Leon Festinger, Gordon Allport, and Anthony Greenwald, who realised that people are often unwilling, for various reasons, to express their true feelings about people from other social groups. This may be down to concerns of self-representation – the desire to be seen as “politically correct” in popular terms – or the complicated nature of prejudiced feelings which Allport terms the “inner conflict”. Many people recognise within themselves attitudes to race which make them very uncomfortable, even angry with their own feelings. Allport identified four strategies which people employ to deal with this sense of ambivalence: repression, denial, defence, and rationalisation, of which repression is the most common. Therefore the challenge for psychologists has been to devise research methodologies which get at the beliefs people hesitate to express, even if they are aware of holding them.

This section provides a helpful introduction to the way social psychologists have addressed the topic of race and prejudice but makes no reference to the contribution of other disciplines. Cognitive anthropologists such as Lawrence Hirschfeld have studied children’s classification of humans into racial groups, and the early development of our negative attitudes to people who are different from themselves. Anthropological approaches have also tackled some of the methodological flaws which Beattie identifies in lab-based psychological tests.

Beattie’s own research on unconscious racial bias is presented in Part III. In his experimental study, research participants were shown four equally strong CVs of candidates short-listed for an imaginary academic post. Photos of the candidates were attached, two of non-white, and two of white people, and the participants were asked to shortlist two of them. The conclusion of this part of the study, which Beattie describes as “extraordinary and very worrying”, is that white members of the simulated selection panel were much more likely to favour white candidates, while to a lesser extent non-white people would prefer non-white candidates.

In the next part of the exercise, researchers used gaze-tracking technology to record which parts of the candidate’s CV the participant studied with greatest care. This showed that participants read CVs differently according to the ethnicity of the candidate, focusing for longer on the positive information contained in CVs of white people, and on the less favourable information about non-white candidates. Again Beattie makes the point that despite our attempts to act fairly and rationally, our good intentions can be undermined by our own quick, automatic and unconscious biases.

The final chapter of the book is entitled ‘What can we do about any of this?’ and brings us back to the concrete problem of under-representation of BME people in British universities. Beattie talks about some strategies to minimise the effects of implicit bias: for example, not asking selection panels to voice their “gut feelings” about candidates, and to be aware of the effect of time pressure on rational decision-making – but also the use of experimental techniques actively to reduce automatic prejudice. After the dense quantitative data of the preceding chapters, this conclusion is rather abrupt and I felt such an important exploration of the practical consequences of Beattie’s experimental findings deserved more space – if not a separate publication.

Overall, this is an intriguing book which holds the reader’s attention through seventeen short chapters. Its sometimes abrupt shifts of pace and register, from autobiography through historical narrative, to research data and political polemic, occasionally jar as one wonders precisely what sort of book this is intended to be. As much of the book is taken up with material previously published in Beattie’s memoirs, and in a review of past work by social psychologists on race and prejudice, it may be of less interest to researchers in the field than to non-specialists seeking a concise overview of the topic. However, the result is a convincing account of the importance of psychological research in understanding a phenomenon which has very real, and often devastating effects on the life chances of people in stigmatised social groups.

Eona Bell
Eona Bell has a PhD in social anthropology and an MSc in cognitive anthropology from the LSE. Her doctoral thesis was about multiculturalism, learning and ethnic group formation in Edinburgh’s Hong Kong Chinese community.