According to Open Europe, after weekend elections, Cyprus is currently in the process of negotiating a large bailout, from the EU, IMF and the ECB. Real Time Europe reports that these negotiations must be successful by 3 June – when over €1.4 billion of the country’s government bonds fall due.  Meanwhile, the FT’s Brussels blog wonders if Ireland and Portugal will be able to restructure their bailouts, and get an extension, in the same way that Greece has done.

Dimitris Rapidis at Blogactiv.eu writes on why there are no investments in Greece, saying that while the country is now unlikely to leave the euro, investment risk remains high, and high levels of bureaucracy are also an impediment.

This week also sees the European Parliament vote to limit European bankers’ bonuses. In the lead up, the FT’s Brussels blog says that the UK looks isolated in its opposition.

Rhein on Energy and Climate at Blogactiv.eu says that EU’s Emission Trading System is badly in need of reform, arguing that the financial crisis has led to stagnating production, meaning that targets have been easily reached with little extra effort, and large profits have been made with surplus CO2 allowances.

Nada es Gratis examines the difficulties faced in reforming Spanish universities, as many Spanish students are now seeking education elsewhere due to the apparently low quality of many of the country’s colleges and universities.

The OFCE blog looks at a new French law to separate banks’ trading activities from the rest of their operations. Meanwhile, Craig Willy examines US economist Paul Krugman’s changing views on the French economy over the past two decades.

Sunday and Monday saw elections in Italy. In the lead-up, Au Cafe de L’Europe set the scene, saying that many were hoping for a victory for centre-left politician Pierluigi Bersani, someone who they believe can help Italy to navigate its way out of the crisis. As early projections come in, suggesting that incumbent Prime Minister Mario Monti’s party had done badly, and that Silvio Berlusconi could prevent a centre-left majority in the Senate, Open Europe says that this represents “the stuff of nightmares in Brussels or Berlin”.

In the aftermath of the elections, in which Bersani failed to achieve a majority in the Italian Senate, Mario Margiocco, writing at Project Syndicate, assesses the next move for Italy’s parties. He argues that Beppe Grillo’s desire to force new elections could backfire as it usually proves extremely difficult for protest movements to sustain their initial electoral breakthrough.  Open Europe has a round-up of senior European politicians’ views on the election result, who mostly say “stay the [reform] course…or else”. Lost in EUrope says that in Germany, Angela Merkel’s party, the CDU, are continuing to bash Italy over the election result.

A Fistful of Euros takes a close look at what is causing a shortage of Bulgarians in Bulgaria. The answer: emigration and an ageing population. Meanwhile, New Eastern Europe looks at the recent re-election of Armenia’s President, Serzh Sargsyan. They comment that the ‘clean’ election should pave the way for further integration with the EU. Fredrik M Sjoberg at the Monkey Cage takes the opposite line, suggesting that there exists real evidence of fraud in the elections.

Robin Niblett at Project Syndicate discusses the latest attempts to negotiate a free trade agreement between the EU and the United States.

Real Time Europe looks at the current state of play for relations between Iran and the EU, saying that Europe has had great patience in the face of Iran’s ‘dithering’ over negotiations about the country’s nuclear programme. Also in the Middle East, Politics In Spires gives an overview of an interview with Dani Dayan, outgoing head of the Judea Samaria and Gaza Council.

New Eastern Europe looks at the possibility that Russian President Vladimir Putin might be seeking to restore the USSR in the form of a new Eurasian Union.

Chris Dillow at Stumbling and Mumbling writes on recent allegations of sexual harassment against a member of the UK’s House of Lords, Chris Rennard. He argues that the real lesson which should be taken from the affair is not one about sexism in politics, but about the corrupting force of power.

Mahmoud Mohieldin and Zoubida Allaoua at Project Syndicate write on the design of sustainable cities. While many cities in Europe and the rest of the developed world are struggling to balance economic development against environmental concerns; cities in the developing world have the opportunity to structure new cities more rationally.

As the dust settles on Italy’s election, Open Europe shows the ‘shocking’ result for comedian Beppe Grillo, who has twice as many seats in the Lower House than Mario Monti’s party. 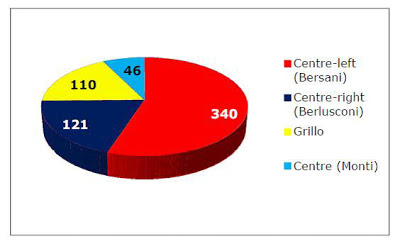 What has President of the European Council, Herman van Rompuy been up to this week? This week he attended an EU-Ukraine summit, addressed the Policy Network Conference in London, and met with Mario Monti in Italy.

Craig Willy looks at the wit and wisdom of Niccolo Machiavelli.

Scandinavia & the EU at Blogactiv.eu looks at the ‘scandalous’ poster that helped Denmark to join the EU 40 years ago.

Brussels blog round up 22-28 March: Dutch and French elections, Obama in Italy, and who won the Clegg-Farage debate?