In the past two years Syria’s civil war has displaced hundreds of thousands of refugees across the Middle East and Europe. Philippe Fargues looks at Syrians who have sought asylum in the EU, finding the number to be relatively low. He argues that the EU must do more to protect refugees, help them to come to the EU, and encourage their resettlement.

In addition to an estimated nearly 60,000 civilian deaths, more than one million people have been internally displaced, and nearly 450,000 have sought asylum outside their homeland since the beginning of the Syrian crisis. Turkey (177,000), Lebanon (179,000), Jordan (205,000), and Iraq (87,000) are accommodating the vast majority of refugees and thousands await registration. In North Africa, UNHCR has registered nearly 10,000 Syrian refugees, and tens to hundreds of thousands are claimed to reside without UNHCR registration.

Most countries involved in the Syria conflict are acutely linked to the European Union, not only through Association Agreements (which provide a framework for cooperation), but also through their involvement in a progression towards a peaceful, stable, and prosperous region. At a time when unprecedented changes are occurring in the region, the EU could grasp the opportunity to show its responsibility to burden sharing and its commitment to mutually improving both shores of the Mediterranean.

Only a tiny proportion of those fleeing Syria have been admitted within European borders.  The total numbers are unknown, due to the particularly clandestine nature of irregular stay and entry, and the lack of availability of EU statistics. Despite this, we do have some facts on Syrian refugee numbers in the EU.

Second, as shown in Figure 1, Syrian asylum applications within Europe have increased since the beginning of the conflict, but remain small. Recorded Syrian irregular entries show the same pattern of increase, but similarly remain small. 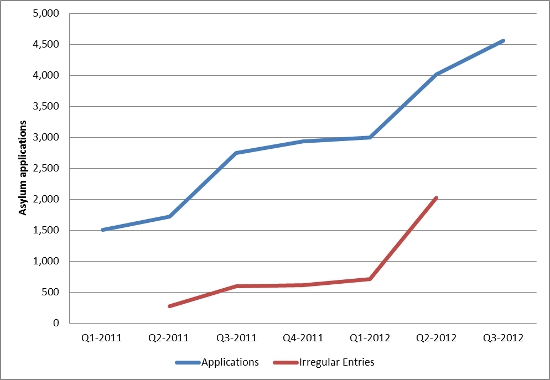 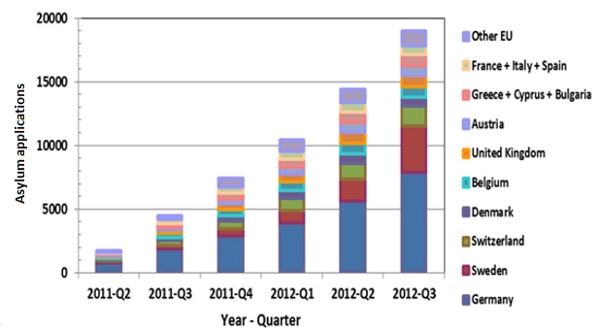 In addition to political efforts aimed at assisting the Syrian people, the EU has taken several actions regarding the crisis. For one, humanitarian assistance of over €400 million has been provided to those within and outside Syria by the EU and its Member States. Europe has also granted Syrian asylum seekers the highest percentage of positive decisions out of the top 30 nationalities applying for asylum in the EU. EUROSTAT reported that in Q2 2012, 4,390 out of 4,765 applications were positively granted protection. However, levels of protection vary across Europe. Most EU Member States have refrained from forcibly repatriating Syrians back to their country. The EU has also considered implementing a Regional Protection Program within the Syrian context that could enhance the capacities of countries dealing with international protection and refugee issues.

Increased border security has been another European response. In July 2012, Greece (with the assistance of the EUs Frontex and the European Asylum Support Office) dispatched 1,800 border guards to the Greek-Turkey Evros border and placed 26 floating barriers along the river. More than 80% of Syrians crossing into Europe in the first quarter of 2012 did so through this border.

Amidst this backdrop, how could the EU respond to the crisis evolving in its neighbourhood? In order to continue efforts at resolving the Syrian crisis, the EU could firstly increase refugee resettlement for those who have been affected by the Syrian crisis and are the most in need. The EU has not publicly acknowledged the need for Syrian resettlement and has instead focused on providing assistance to third host countries. The EU could encourage resettlement as it has done in other refugee-producing conflicts, such as Iraq.

Second, the EU should continue positive asylum procedures throughout the EU, and grant prima facie recognition including the provision of sufficient assistance. Third, the European Asylum Support Office (EASO) could take a more active role, by providing and analysing clear data regarding Syrian refugees, and coordinate member states’ efforts at providing protection to Syrians. It can also assist them by providing a unified protection status and advise them on how to assist Syrians already within the EU. Finally, the EU must ensure that it continues to work with its international partners to find a political and humanitarian solution to the Syrian crisis.

This article is a shortened version of the Migration Policy Centre Research Report,”The European Response to the Syrian Refugee Crisis: What Next?”.

Philippe Fargues – Migration Policy Centre, European University Institute
Philippe Fargues is the Director of the Migration Policy Centre at the European University Institute, the founding Director of the Consortium for Applied Research on International Migration (CARIM) and co-Director of the Florence School on Euro-Mediterranean Migration and Development. His research interests include migration and refugee movements, population and politics in Muslim countries, family building, demographic methodologies and their application to developing countries.