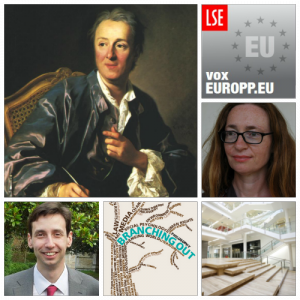 This past February and early March, the London School of Economics held its 5th annual Space for Thought Literary Festival, under the theme ‘Branching Out’. The Literary Festival commemorated the 300th anniversary of the French Enlightenment philosopher, art critic and writer Denis Diderot, who is best known for co-founding and editing the Encyclopedie. In celebration of the five day day event, EUROPP spoke to Dr. Paul Stock, specialist in 18th and 19th century intellectual history at the LSE. Dr Stock chaired the festival’s main event on the life and work of Denis Diderot.

We also hear from Elke Krasny, curator, urbanist and Senior Lecturer at the Academy of Fine Arts in Vienna. Elke speaks to us as part of the event “Between Curatorial and Urban Practice”, which explored how curation evolves amidst new urban contexts.