Reforms across Europe linking pension benefits to contributions may push some elderly into poverty.

Reforms across Europe linking pension benefits to contributions may push some elderly into poverty.

Since the 1990s, the public pensions landscape in the EU has altered drastically, with reforms changing both the nature of provision and the level of generosity. Looking at the changes made in ten EU countries, Aaron George Grech finds that pensions systems’ effectiveness in alleviating poverty remains strong only in those countries where minimum pensions were improved. However, moves to link benefits to contributions have raised adequacy concerns for women and for those on low incomes which policymakers should try to tackle.

Worried of a long-term increase in pension spending, many European governments have carried out substantial reforms. In some cases, especially in Eastern Europe, reforms have also reflected more immediate fiscal problems and a desire to reduce the state’s role. However, policy discussion is increasingly focusing on the broader impact of these changes.

For instance, in 2012, the European Commission reached an agreement among EU Member States on common objectives on pensions and on a voluntary process for political cooperation known as the open method of co-ordination (OMC). It then prepared a white paper on pension reforms in which it argued that countries should “in the spirit of solidarity and fairness between and within generations, guarantee adequate retirement incomes for all and access to pensions which allow people to maintain, to a reasonable degree, their living standard after retirement”.

In the OMC, countries report developments in agreed indicators – the principal being net replacement rates. The latter are “the level of pension income the first year after retirement as a percentage of individual earnings at the moment of take-up of pensions…for an assumed hypothetical worker, who in the so-called ‘base case’ has a given earnings and career profile (male, earnings of average wage constant over his fulltime 40 years career, retiring at 65)”. Figure 1 below shows estimates for ten countries (covering 70% of the EU’s population) that have carried out substantial reforms. In most cases, the latter included changing system rules from pay-as-you-go defined benefit (where benefits are determined in relation to an agreed pensionable income, financed out of current contributions) to defined contribution (where benefits depend on contributions made, any accrued returns and the time to be spent receiving the benefit), either notional (i.e. benefits are still financed from current revenues) or funded (i.e. contributions are not immediately spent).  On average, across these countries, contributing for a full career on the average wage currently results in a net replacement rate of 75%, with reforms reducing this to 68% by 2048. Since the World Bank suggests that for a full-career worker, a 40% replacement rate should enable the maintenance of subsistence levels of income in retirement; these estimates suggest pensions will remain adequate. 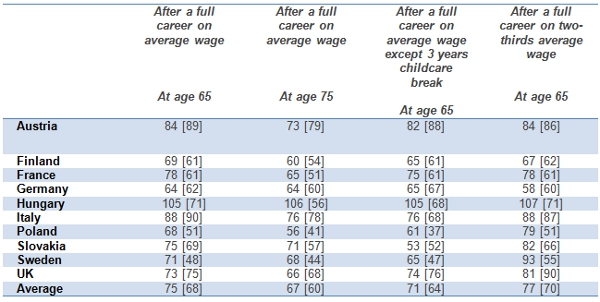 Note: Average is computed as a weighted average of each country’s estimates weighted by the size of their population in the total across the ten countries. Note that for some countries, such as the UK, the level is much boosted by the assumption that individuals save in a private pension on top of their state provision.

However replacement rates depend on many factors – such as career length and the amount of income on which a person has contributed. The EU’s ‘base case’ is not representative, with very few people employed full-time without interruption, and always on the average wage. For instance, in Italy newly retired men have actually contributed for less than 35 years, with women having just 28 years of contributions. Figure 1 shows how even a 3-year career break can substantially impact benefits – e.g. in Poland following the reforms, generosity will fall from the current 61% to just 37%. Reforms linking the level of benefits to the contributions made have made systems less progressive. For instance the net replacement rate in Sweden for someone on two-thirds of the average wage will drop from the current 93% to just 55%. Finally, generosity does not remain constant throughout retirement. Most reforms have reduced benefit adjustments post-retirement such that the relative value of pensions falls considerably. For example, in Hungary the reforms will result in pensions losing nearly a quarter of their value just 10 years into retirement.

All this suggests that to understand fully the impact of pension reforms, one needs a more focused indicator. A promising avenue involves using pension wealth estimates that capture the projected total benefit flow in retirement. Take, for instance, a case where the pension benefit is equivalent to 50% of earnings for 20 years. Assuming away time preference, you would be as better off if you forgo receiving pensions in lieu of a payment equivalent to ten times earnings. If however benefits fall in relative terms by a tenth every ten years (broadly in line with the fall seen in Figure 1), you would require a payment of just nine times.

The other defect of the OMC measure relates to the assumption of full careers on average wages. To approximate reality better, entitlements are calculated for persons on below-average wages using an estimate of career length based on Labour Force Survey data on activity rates by age and gender. The resulting entitlements, pre- and post-reform, are then compared with that flow of income that would enable pensioners to remain out of poverty throughout retirement. Figure 2 shows that current pension entitlements across these ten EU countries translate in an achievable poverty threshold of 67% for men and 52% for women. Note that the official relative poverty threshold adopted by the EU is 60%. By 2050, pension wealth would enable the average man, previously in the bottom half of the wage distribution, to have an income equivalent to 60% of contemporary median income. For women, however, there should be a slight improvement, to 53%. The largest decline in achievable thresholds is for low-income men in Slovakia, followed closely by women in the same country. At present pension generosity in Slovakia is at par with neighbouring Austria. Reforms have, however, impacted severely on the system’s progressiveness. Moreover the state pension was partially replaced by a mandatory private defined contribution pension.

Figure 2: Achievable poverty thresholds based on net pension wealth entitlements of those in the bottom half of the wage distribution (% of median income) 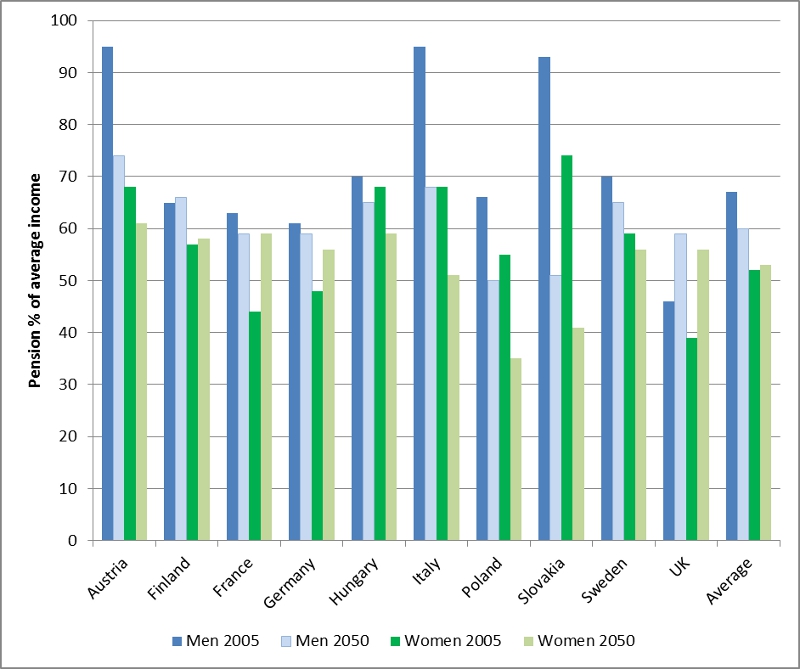 Similar reforms were carried out in Poland, and the results are expected to be quite similar. The state pension, by itself, will no longer maintain low-income individuals, particularly women, out of relative poverty. Weak indexation and a long retirement period will interact to push people into poverty in their old age, increasing the importance of having adequate minimum pensions in place.  In fact, in countries like Germany, France and the UK, where the generosity of minimum pensions was improved, poverty alleviation, notably among women, could strengthen. These estimates also show that the tightening of links between contributions made and benefits received, in countries like Italy and Austria makes it more crucial to have active labour market policies unless countries are ready to countenance an increase in pensioner poverty. Similarly countries, especially in Eastern Europe, need to put in place adequate crediting provisions, if they want to reduce gender income inequalities in old age.

A more detailed version of this paper can be found at http://sticerd.lse.ac.uk/dps/case/cp/CASEpaper172.pdf.

Aaron George Grech – LSE CASE
Aaron George Grech works at the Modelling & Research Office of the Central Bank of Malta and is a visiting research fellow at the LSE’s Centre for Analysis of Social Exclusion. The views expressed here are those of the author and do not represent those of the organisations with which he is affiliated.

In Cyprus, the Troika should be promoting health reforms towards universal coverage, not derailing them.