The weekend’s election in Iceland saw a shift to the right for the country, and substantial gains for the Independence Party, which is against joining the EU. Reflecting on the election results Benjamin Leruth argues that despite reluctance from the two winning parties, an EU referendum may still be on the cards for Iceland as a majority of the population still supports accession talks.

On Saturday, Iceland’s voters handed the incumbent left-wing coalition defeat, leaving the Independence Party as the largest party. The elections took place four years on from what is referred to as the “earthquake elections” of 2009, when due to events related to the banking collapse of October 2008, the ruling Independence Party (IP) lost its leadership. These elections also saw the Social Democratic Alliance (SDA) become the largest party in the Icelandic parliament, the Althingi, for the first time in its history, forming the first left-wing coalition since Iceland’s independence with the Left-Green Movement (LGM). Furthermore, the IP’s electoral performance (losing 13 per cent and 9 seats) was the largest drop ever seen in Iceland.  The new government led by SDA leader Jóhanna Sigurðardóttir was then seen as a cornerstone of Iceland’s political history. Iceland’s application for EU membership was immediately submitted to the European Commission and reforms were taken in order to stabilise the economy. As a result, Iceland exited recession in late 2011, and many observers saw the country’s recovery as an example for other Western European economies.

Nevertheless, public support for the government decreased drastically from 2011 onwards. First, the government were defeated in referendums over the Icesave dispute, which angered the population. Second, unemployment and inflation rates remained higher than Iceland’s average. Third, throughout the second half of the legislature, internal divisions and ministerial instability occurred, leading to the creation of splinter parties aiming to run for the next Parliamentary elections.  Fourth, the EU issue, which was seen as one of the government’s main priorities, split the population. Other internal factors such as disputes over a new Constitution, a well-organised opposition, fishing policies and healthcare cuts also contributed to this popular distrust.

As a result, it was expected that the left-wing coalition would suffer major losses during the 2013 election campaign. Throughout the last year of the legislature, opinion polls indicated strong support for the IP and the Progressive Party (PP), while the SDA and LGM were predicted to lose around half of their seats. Furthermore, the appearance of ten new parties in the political arena, such as Bright Future (BF), the Pirate Party (Pir) and Dawn (D) indicated an increase in electoral volatility.

In the last weeks of the campaign, the major issue related to the two largest parties in the polls: who would take the lead? The Independence Party or the Progress Party? 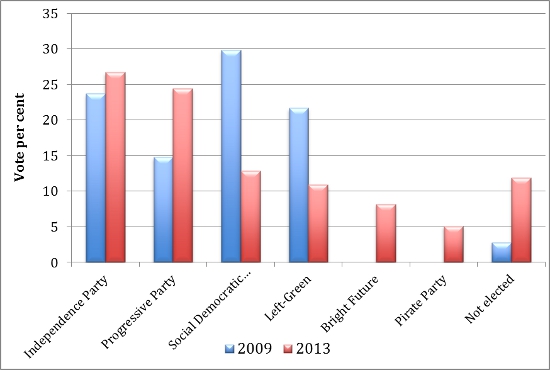 The results of the 2013 election, shown in Figure 1 above, confirm the trends seen in the second half of the legislature. The left-wing coalition lost 18 of its 34 seats, while both the IP and PP made substantial gains. However, the two latter parties both won 19 seats, which is a unique case in Iceland’s history. On the one hand, the IP is the largest party in terms of vote; on the other, the PP gained the most support. This poses a problem in terms of coalition building, and speculations on who should take the lead began as soon as election results were made official. On Monday, the President of Iceland Olafur Ragnar Grímsson met all party leaders, before appointing a potential Prime Minister who will be in charge of forming the government. There are two main possibilities: either a right-wing government with the IP and PP, or a centre-left one consisting of a coalition between the PP, LGM and SDA.  In both cases, the Progressive Party holds the balance of power. At the time of writing, the former option is the most likely one.

Another unique factor can be observed in these election results: the high score of non-elected parties. While only two parties gained 2.81 per cent in 2009, a total of nine parties that will not be represented in the Parliament share a total of 11.9 per cent this year. This is a direct consequence of the instability that occurred within well-established political parties, leading to the creation of splinter groups, and indicates a higher degree of electoral volatility. The performance of the Pirate Party (especially in the Reykjvaik area) is also notable, as it has become the first party of its kind to win seats in a national parliament.

What do these results mean for Iceland’s application for EU membership?

Both of the winning parties are against joining the European Union, and have showed strong reluctance in continuing accession talks. However, these election results do not mean that Iceland’s application for membership is withdrawn. Indeed, while a recent poll showed that a majority of the population is in favour of continuing accession talks, the most likely scenario is that the future government will hold a referendum on this issue. Iceland’s relationship with the EU is a divisive topic within the country, and the new ruling parties might want to settle this as soon as possible. Should negotiations go ahead, the process will nevertheless become extremely complicated if the government is composed of two anti-EU parties.

Some have interpreted the 2013 election results as a vote against the EU and austerity. However, the results should be analysed differently. The European issue only played a small role during this electoral campaign and was much less salient than internal issues, such as healthcare and social benefits. These results also bring Iceland back to the same arrangement it had a decade ago in 2003, with an IP-PP leadership: implying that the “earthquake elections” of 2009 did not shake up Iceland’s political tradition in the long run.

Eurosceptic attitudes are widespread in the Nordic states, but there is a high level of variation between countries.