What are the implications if parties that control local municipalities are the same as those that are in government nationally? Using data from Italy, Emanuele Bracco, Francesco Porcelli and Michela Redoano find that municipalities which are politically aligned with central government get more in government grants, and have lower taxes on average. Their mayors also have a better chance of re-election.

In the past 30 years, the economic literature has explored what determines how much national or central governments fund their lower-tier counterparts, local governments. In order to improve its electoral prospects, an upper-tier government may wish to provide larger amounts of money to lower-tier governments. This is most likely to occur, when they (i) are run by the same party that is ruling centrally (the alignment effect), or (ii) are characterized by an electoral behaviour that is more sensitive to policy changes. This envisages a targeting of so-called (electorally) marginal constituencies.

We have explored this relationship between central and local government behaviour, considering their electoral incentives. As well as analysing the opportunistic behaviour of central government in setting grants to lower-tier governments, we have also looked at what local governments do in terms of local taxation. We find that municipalities which are politically aligned with central government, are awarded on average €26 per capita more, and have an average of €22 lower taxes per capita. This in turn has a substantial effect on the probability of re-election: aligned mayors enjoy a 50 per cent increased likelihood of re-election compared with their unaligned counterparts.

Our findings are strongly supported by the data that we collected data on Italian municipalities. We analysed municipalities’ yearly budgets and local election results from 1997 to 2008, together with a number of political, geographical, economic and demographic controls. Italy is a good laboratory to study this kind of dynamics. First, there are a very large number of municipalities, each run by a directly elected mayor. Mayoral elections are characterized by a very high turnout (about 70 per cent), and mayors are very visible figures in the life of Italian towns. Municipalities have a strong fiscal autonomy, and levy a very salient property tax, which is paid by almost all voters, as the vast majority of Italians are homeowners. Finally, at least in the period we analyse, the Italian political system was characterized by two (quite) stable electoral cartels, centre-left and centre-right, which were consistently fielding joint mayoral candidates throughout Italy, and were also the protagonists of the national political debate. This implies that the Italian political system, albeit being a complicated multi-party system, could be easily analysed as a two-party system.

We used regression discontinuity analysis, focusing on municipalities in which the mayor had been elected with a very small margin. We consider as “treated” the municipalities which are aligned with the central government, and the municipalities which are not aligned with the central government as a “control” group. When the margin of victory is very small and there is a large electorate, we considered the election result, and therefore the alignment/unalignment status as randomly assigned. This allowed us to separate the alignment effect from all other possible confounding factors, and establish a causal link between public policies and electoral results on the one hand and the alignment status on the other.

The Figures below show the margin of victory of the incumbent mayor, which is positive when the mayor and central government belong to the same political party, and negative otherwise. Figure One illustrates how in the neighbourhood of zero, aligned municipalities (on the right) receive more grants than unaligned ones 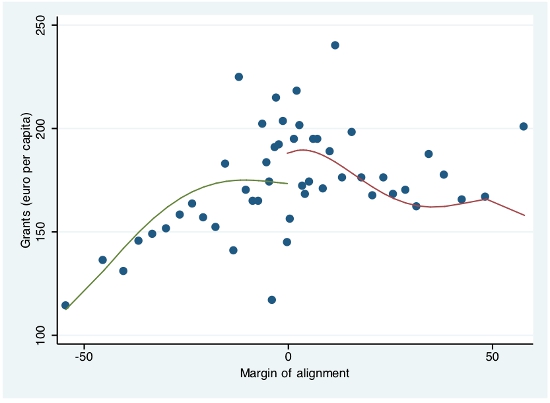 Similarly, in Figure 2 we can see how those same aligned municipalities also charge lower per-capita taxes than their unaligned counterparts. 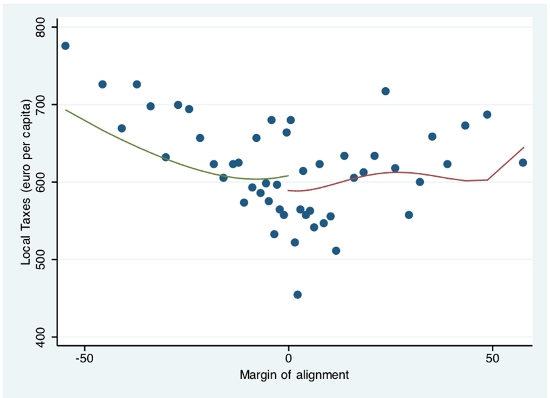 Our analysis started from the established idea that the main reason for these electoral incentives is that voters do not have a perfect understanding of how to assess blame or praise over the provision of local public goods. They may understand that part of the funding comes from their local taxes (which they observe) and part from the grants of upper-tier governments. Nevertheless this is not enough for them to have a precise understanding of “how much” of the credit for the local public good provision should be awarded to the local and central government respectively. This implies that if both local and central government administrations belong to the same party, that party can fully exploit the investment in that municipality, and voters will reward it for the provision of public goods. If the local and central governments belong to opposing parties, then the central government may not have the same incentive to “invest” in a municipality, as the credit for the devolved funds will accrue also to the opposing party. This is especially true if voters tend to believe that the responsibility of local public good provision lies mostly in the hands of the local politicians.

The fact that upper tier governments tend to favour local “aligned” mayors, implies that mayors who receive more funds can decrease their taxes, and vice versa mayors who receive fewer grants need to increase their taxes. This, finally, is going to have substantial effects on the electoral prospects of incumbent mayors: aligned mayors, enjoying more grants and imposing lower taxes, have a better chance of re-election than their unaligned counterparts.

These findings once more prove how politicians are very sensitive to electoral and partisan incentives, and how these can have a substantial effect on public finance dynamics and electoral results.

A longer version of this article is available here.

Michela Redoano – University of Warwick
Michela Redoano is a Senior Lecturer in Economics at Warwick University and CAGE and CES-Ifo Associate. Michela’s research interests are in the areas of political economy, tax and yardstick competition and voters’ behaviour.

While Scots are flocking to the polls, elsewhere direct democracy is failing to engage voters

If it is to reinforce its international influence, then the EU must redouble its commitment to multilateral trade liberalisation