Brussels blog round-up for 25 – 31 May: Commissioners in trouble, UK challenged over migrants’ benefits, and should the EU get rid of its small change?

Brussels blog round-up for 25 – 31 May: Commissioners in trouble, UK challenged over migrants’ benefits, and should the EU get rid of its small change?

This week, the European Commission announced that some eurozone members would be given more time to get their deficits under control, for example, France will get two extra years, according to Coulisses de Bruxelles. Open Europe says that the plans are much of the same as what has gone before, though they do go into the country-specific recommendations of the Commission (France is not keen to be dictated to, they later write). Amongst the released documents, the FT’s Brussels blog has found a requirement for Slovenia to hire outside auditors to evaluate the health of the country’s banking sector, indicating concerns from Brussels about the country’s central bank.

Lost in EUrope reports that the chief of the German Bundesbank, Jens Weidmann, has recently stated that sovereign defaults should still be a long-term possibility. Con acento hispano at Blogactiv.eu has a good round up of Europe’s tax havens, which are responsible for the loss of billions of euros worth of tax revenue.

Several European Commissioners are in trouble this week for comments they have made. On Tuesday, energy Commissioner Günther Oettinger came under fire for saying that Romania, Italy, and Bulgaria were nearly ‘ungovernable’, according to Romanian MEP Corina Cretu. Then, on Wednesday, prior to the release of the European Commission’s country recommendations, two European Commissioners tweeted the news about their respective countries, causing a media storm. Décrypter la communication européenne looks at the EU’s social media presence, saying that the European Parliament is the best represented institution on the social web, with over 800,000 fans on Facebook.

Rhein on energy and climate at Blogactiv.eu has some good reasons why the eurozone should get rid of its 1 and 2 cent coins: it would make citizens’ wallets lighter, make it easier for businesses to fix prices, and reduce bank handling charges.

ACELG at Blogactiv.eu looks at the current legal ‘black hole’ of responsibility for compensation when a member state terminates a case against a person after using the European Arrest Warrant. Currently if a person is arrested in one country, they must travel to the member state that issued the warrant (if different), which may prove difficult.

Grahnlaw looks at public opinion in Norway towards the EU, saying that only one in five Norwegians support accession. Writing at Blogactiv.eu, Scandinavia & the EU looks at potential Danish EU referendum next year – on the EU’s patent legislation and patent court, calling it ‘ridiculous’. This week also saw widespread rioting in immigrant communities in cities across Sweden. Charlemagne says that this has put the international spotlight on the country’s long term failure to integrate immigrants.

French Politics says that the President, Francois Hollande, has upset the left-wing of his Parti Socialiste by once again praising German social democracy. He says that France expects a President who can articulate policy in view of France’s situation, not by importing policies from elsewhere. Still on the Parti Socialiste, Jon Worth looks at the continuing efforts of Greenpeace to convince two of their high ranking members who are based on France’s eastern coast to support further reform of the common fisheries policy.

Croatia, the war and the future looks at the wave of nostalgia for former Yugoslav leader Josip Broz Tito attached to his recent birthday celebrations. They say that the celebrations show that the damage of the old socialist come communist totalitarian regime still exists in Croatia, in that people have been molded into a psyche of dependency on the state. Bankwatch, writing at Blogactiv.eu says that the cancellation of a loan from the European Bank for Reconstruction and Development for a dam in Croatia is a victory for civil society, given concerns about the environmental costs and economic feasibility of the project.

Nada es Gratis looks at the progress of Spain’s fiscal consolidation – the government has managed to reduce the country’s fiscal deficit by 2 per cent of GDP in a year of recession.

Open Europe looks at a new poll in the UK, which finds that most British voters want a change in the relationship with the EU rather than an outright withdrawal. On Thursday, the European Commission announced that it would be taking the British government to the European Court of Justice over the UK’s moves to restrict benefits to migrants. Open Europe calls it an ‘own goal’, saying that it is the worst possible issue to challenge the UK on, at the worst possible time.

This week, the EU/China trade dispute over the alleged ‘dumping’ of solar panels rumbled on. The FT’s Brussels blog warns that the Chinese might initiate a trade war with the EU, if it imposes anti-dumping measures. The European Council on Foreign Relations says that the dispute is the wrong test case for the EU in its trade relations with China, especially given the internal debate over trade policy between Germany and the European Commission. Meanwhile, Open Europe says that EU tariffs could actually harm the European solar panel market, given the winding down of EU subsidies for the technology.

European Geostrategy takes a close look at what the EU’s defense priorities should be: a permanent strategic reserve of troops to mount operations in the region, maritime power (especially in Asia and the Arctic), and contributing to the collective security system of the United Nations. Kiels Prat in Europe calls for more public discussion concerning Germany’s arms exports and how it participates in the global arms trade.

This week sees the lifting of the EU’s arms embargo on Syrian opposition forces. Prior to the lifting, Real Time Brussels says that the negotiations over the policy within the EU show the strength of the system, and its weaknesses, in that unanimity on such issues is often difficult to achieve.

Nada es Gratis examines the value of personal connections in the context of corruption scandals. Looking at examples of Indonesia, Malaysia and the US, they write that the key element in many scandals is the misuse of social connections to further the private interests of public officials.

The OFCE blog looks at how we might decrease global imbalances and inequalities. They propose a return to one of Keynes’ ideas for ’global automatic stabilizers’ in combination with trade sanctions, which would absorb surpluses and deficits. 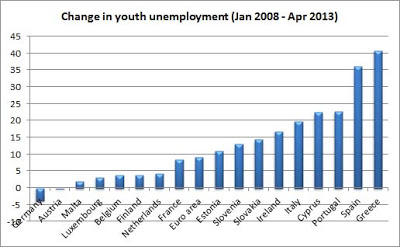 French Politics looks at the differences in the public and private personas of politicians.

Real Time Brussels has an EU guide to broken Belgium.

Brussels blog round up 24 – 30 August: Europe reacts to Cameron’s defeat over Syria, Merkel and Steinbrück’s televised debate, and is France moving to the right?

Brussels blog round-up for 9 – 15 March: The European Parliament ponders absinthe, Germany set for a balanced budget, and is the Netherlands heading for an EU referendum?

Brussels blog round-up for 15 – 21 June: Obama in Germany, Merkel’s manifesto, and a fiery letter from Cyprus