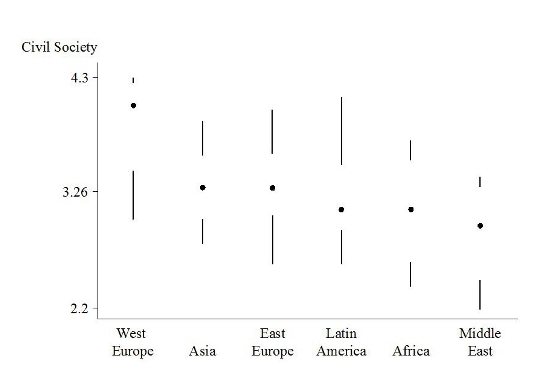 Looking at the CSI’s components it is apparent that some EU member states are at the lower end of the ranking. For instance, in terms of the structure of civil society, Greece, Bulgaria, Poland, Romania, Slovenia, and Italy score lower than EU neighbourhood countries such as Armenia and Ukraine. In terms of the impact of civil society, Greece, Bulgaria, and Slovenia rank lower than Macedonia.

The key question is what drives the emergence of a strong civil society. There is no lack of in-depth country case studies, but few studies have been done on a broad comparative basis. In a recent co-authored paper with Stefanie Bailer and V. Finn Heinrich, I have attempted to do this using the CSI. Broadly speaking, previous studies have identified as driving forces for civil society the role of socio-economic development, societal structures, political institutions and international influences. The first two ‘bottom-up’ approaches comprise the size of the middle class, sociopolitical traditions, and ethnic and religious heterogeneity among other factors, whereas the latter two ‘top-down’ approaches refer to the level of political democracy and international development assistance. Can any of these factors claim to be a primary cause of civil society’s strength?

The results certainly need further scrutiny. But two implications are important for policy debates. First, the EU’s insistence on promoting civil society abroad rests on weak foundations, as some of its current and future member states have relatively weak civil societies themselves. Second, the hope that the promotion of civil society will prove an effective tool for improving political governance may be futile. This is not to argue for robust forms of conditionality, but rather to state simply that strengthening civil society is unlikely to be the magic bullet for improving governance – instead good governance is a prerequisite for a strong civil society.