A number of ideas have been put forward to help tackle youth unemployment in Europe. Bob Hancké takes a closer look at the issue, arguing that while training is never a bad thing, bringing unemployment down is not a substitute for growth. Only in Spain, perhaps, where an entire generation has succumbed to the temptation of higher wages in unskilled jobs today (in the now defunct construction sector), instead of raising their skills for tomorrow, could a sustained training programme bring key benefits.

Everybody seems to have noticed that unemployment in general and youth unemployment in particular are reaching dramatic levels in Europe. The Guardian, the European Commission, the International Labour Organization, the IMF, the German Finance Minister Schäuble and his labour colleague Vander Leyen – those are just a few of those that have sounded alarm bells on the state of the (young) labour market over the last few weeks. The German government even went so far as to institute a direct credit line between its own development bank the KfW and the Spanish counterpart to fund (employment-intensive) small business, and the German federal labour market agency is actively recruiting several thousand young Spanish to learn German and gain a job in Germany. 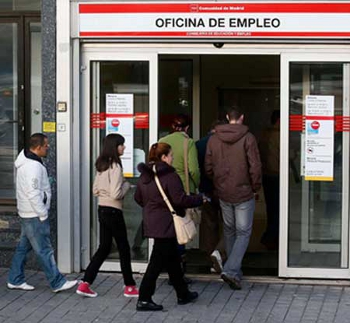 There’s something odd about this attention on youth unemployment. We are aware of the most important stylised facts: unemployment early on in a career leaves a socio-economic ‘scar’ that translates into significantly worse jobs, slower career progression and lower lifetime earnings; training is still the best prophylactic against unemployment; and unemployed youths are more likely to get mixed up in all kinds of unsavoury activities than those who have a job. If all this is true – and I think it is – it is hardly a surprise that everyone is touting training and other active labour market policies as the cure.

But these arguments mix up causes and effects. With very few exceptions – most of which live in economic textbooks and in the Daily Mail’s fantasies (the Daily Mail, for readers outside the UK, is best thought of as the paper sensible people would read on a topic on which they have not quite made up their mind, and then take the diametrically opposed view) – people are unemployed against their will. I fail to see the attraction of a life situation associated with an income of, say, EUR 100 a week for a few months if the alternative is several times more for life. If they could, most young unemployed would take any reasonable job – and Polish and Lithuanians with university diplomas have shown that even waiting in London’s overpriced restaurants can fit that description. The reason why many young people are unemployed in Europe today is because of a lack of jobs, not a lack of stamina, will or skills.

New jobs appear in an economy under two basic conditions. One is for business to be sufficiently confident that stable high growth is around the corner – that is when companies invest and hire new workers. The other is when overall economic growth rates are higher than productivity growth rates: that sucks in employment. None of these conditions exist in Europe today. The Eurozone is mired in a deep recession, even the German growth machine has slowed down significantly in recent weeks, and the (welcome) U-turn by many international organisations and governments away from austerity will take some time to move from words to actions to positive growth.

Without economic growth, training is at best not harmful and at worst a waste of time and money. It might have slightly beneficial effects in the long run by raising productivity and thus shifting the feasible, non-inflationary growth rate upwards. And if well organised, it might even have positive effects on demand: usually those that require training are among those who will spend most of the extra money immediately, and will spend it locally (on groceries and not on German cars). But under conditions of very low growth, the effect of training programmes is very likely to be little more than an employment programme for the trainers and those who administer training.

There is one country in Europe where, for highly idiosyncratic reasons, an emphasis on training might be relevant: Spain. Over the last 15 years (ie. more than half of a generation) many young people forewent higher education in favour of higher wages in relatively low-skilled sectors such as construction and tourism. The country is the only one, in fact, where the number of people graduating from universities has fallen over the last 20 years. For background: usually high growth rates translate into growing numbers of graduates, as relative earnings of that group diverge dramatically from the rest of the population, relative family wealth makes that a possibility, and government policies include university expansion (thanks to Luis Garicano for a very insightful discussion on this). Spain’s growth rates over the period in question were impressive but also heavily skewed toward construction, with very little positive impact on the rest of the economy. Training seems to be helpful in Spain for one simple reason: a modern economy cannot function with such a large group of 25-40-year olds that is systematically under-skilled. In addition, imagine a benign scenario in which growth were to pick up and more sophisticated skills were needed in, for example, the engineering sector (investment in the car industry has recently picked up a bit); Spain may simply not have them available anymore.