Since the beginning of the economic crisis voters have punished incumbent governments for rising unemployment, but not for rising income inequality.

Rising income inequality has been a key criticism during protests such as the ‘Occupy’ movement, but it is unclear how such criticisms affect voting behaviour. Florence Bouvet and Sharmila King test the extent to which voters have penalised incumbent governments for increases in income inequality and unemployment, both before and after the start of the economic crisis. They find that while a rise in unemployment is strongly linked to a decrease in support for incumbent parties, there is no evidence that voters have penalised incumbents for rises in income inequality. This suggests that citizens might conceive of some economic problems as an ‘exogenous shock’ which their governments cannot be held entirely accountable for.

There has been general increasing dissatisfaction with the growing income gap between the rich and poor in Western countries. In a recent study conducted by the World Economic Forum in 2013 (Figure 1), severe income inequality is now ranked as the most likely risk facing the world.

While most OECD countries experienced increases in income inequality in the two decades preceding the Great Recession (Figure 2), rising income inequality during the 1990s and early 2000s was not an electoral issue in most developed economies simply because national economies were growing rapidly. The 2008-2009 Great Recession brought this issue back to the forefront of public debate, even though income inequality generally decreased during the first two years of the economic crisis, as richer households experienced a more dramatic drop in their earnings and investment incomes than the rest of the population (Figure 3). 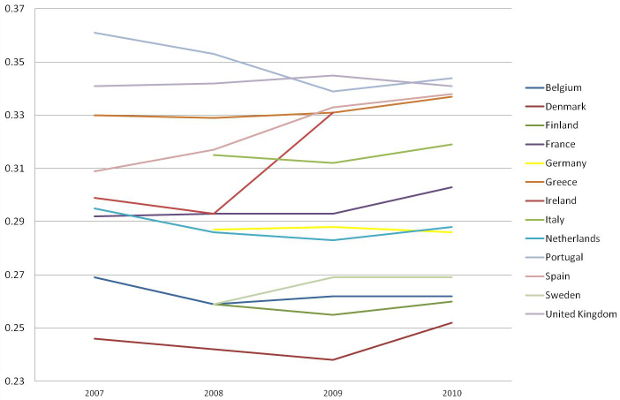 One example of the dissatisfaction among the electorate is the “Occupy Wall Street” protests that emerged from the recent US banking and financial crisis. While the “Occupy” movement in the U.S. has lost some of its momentum with the country’s economic recovery, new protests have emerged in Europe with the sovereign debt crisis. Austerity measures undertaken notably in Portugal, Ireland, Greece and Spain to qualify for bailout funds from the Troika (European Commission, ECB, and IMF) have led to cuts in government redistributive policies, which in some peripheral European countries (Greece, Ireland, Italy, Portugal, and Spain) triggered an increase in unemployment and income inequality (Figure 4).

Figure 4: Unemployment rates in the European Union, the United States, and Japan 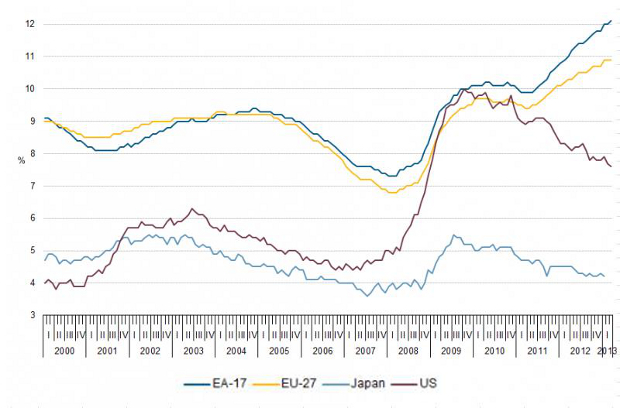 Did the growing dissatisfaction with income inequality and rising unemployment observed on the streets manifest itself on election days? Since 2008, out of the 35 parliamentary elections that were held in the 27 OECD countries, only 8 incumbent leading parties have remained the first parties in their respective national governments. On one hand, the extensive literature on economic voting finds that poor economic development, such as rising unemployment rates, reduce the vote shares of incumbents. On the other hand, the severity and global dimension of the crisis “severely challenged the capacity of governments to steer the national economy”, and thus, could limit the extent to which voters hold incumbent governments accountable for poor national economic outcomes. We use data on parliamentary elections in 27 OECD countries between 1975 and 2012 to examine whether the recent economic crisis induced a shift in economic voting and the relevance of income inequality.

Overall, we find that the economic downturn might have augmented economic voting in terms of unemployment and economic growth by heightening the salience of these issues, since this recession is one of the most severe economic downturns these countries have experienced since WWII. Our analysis suggests that voters did not discount the recent economic crisis as a completely exogenous shock, since they held incumbent governments more accountable for the deterioration in national labour market conditions. Yet, voters acknowledge that international economic interdependence potentially undermines the efficiency and efficacy of domestic stabilisation policies. This result suggests that a severe economic crisis does not necessarily result in voters removing an incumbent party from office.

A longer discussion of the topic covered in this article is available in the following paper.