Although higher education in Europe has traditionally been strongly dominated by public provision and government regulation, recent developments have changed this scenario in recent decades, and all around the globe, private higher education has been experiencing a notable growth. Private institutions still play a small role in many European systems and its emergence is taking place against a background of large and consolidated public sectors and that will certainly influence its profile. Market-focus and privatization has also been playing an increasing role in funding mechanisms and funding sources for higher education. After several decades of expansion, societies and governments are less willing to put additional public resources into Europe’s higher education system due to a variety of trends, such as the rising cost of higher education; financial austerity; and a changing view about the role of the state and the nature of public services. 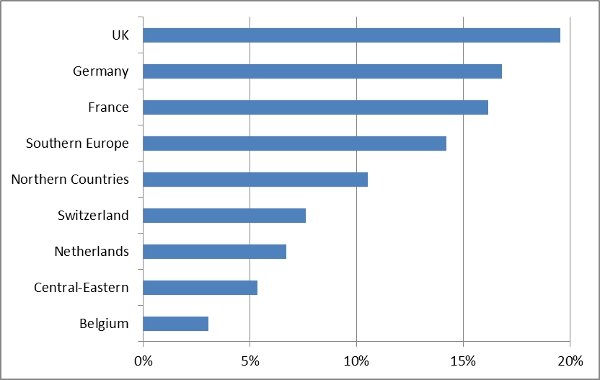 We can gain insights on this concentration by examining grants awarded by the generous and highly competitive European Research Council, that are awarded in a competitive basis to scholars either in an early stage of their careers or in a more advanced stage for a period of 5 years. Figure One above shows the distribution of research grants over the last 5 years by countries and groups of countries. The data indicate that some countries are clearly far more represented in these grants than others. The UK is clearly the leading country, followed by Germany and France. Size of the country and of the higher education and research system does not seems to be decisive criteria, with some smaller countries capturing a significant share of grants, notably The Netherlands, Switzerland, Belgium and Israel. Some parts of Europe show a much lower aptitude to compete for those attractive grants, such as those in Central, Eastern and Southern Europe. Even the Northern countries (Sweden, Denmark, Norway, Finland, and Ireland) show a less than impressive performance.

Moreover, the distribution across disciplines is also creating further inequalities, with some areas being privileged due to their societal or political prominence (usually the so-called STEM subjects – Science, Technology, Engineering and Medicine). Although some factors may be hindering a rapid process of integration and concentration (especially those referring to the mobility of individuals, especially staff), the signs are also towards a greater mobility of students and staff, especially in choices more strongly related to research-intensive programs and activities.

Like in other dimensions of the European integration, we are dealing with a complex process that raises significant perplexities and fears among national and institutional actors that may hinder further the drive towards greater integration. Some of the major fears refer to the potential concentration effects that may be promoted by further integration and competition. Although Europe has traditionally had a more egalitarian approach towards higher education, there have been multiple signs of change in recent years. Many European governments have shown a willingness to promote multi-level differentiation across national systems regarding aspects such as institutional missions, allocation of funds, or regulatory frameworks.

This is taking place against a background of wider and deeper global changes that may influence European developments, notably through the race towards building world-class institutions (in which funding is concentrated) and the national competition for positioning their institutions in major rankings and league-tables. A European Union increasingly concerned with global relevance may be therefore more willing to concentrate resources in a few elite institutions and in using market regulation to sustain those political intentions.

However, this may create important tensions across Europe. This is likely to cut across countries, regions, sectors and disciplines, since not all of them will be winners and some will tend to be better placed than others to seize the opportunities created by the emerging European higher education and research areas. Like in other dimensions of the European Union, it is yet to be seen how these tensions will be dealt with and to what extent they may create fragmentation and segmentation across Europe. The challenge seems to be how to balance integration, international competitiveness and internal cohesion.

This article is based on the LSE Europe in Question Paper No. 56, ‘The Tortuous Ways of the Market: Looking at the European Integration of Higher Education from an Economic Perspective’.

Pedro Teixeira – University of Porto
Pedro Teixeira is Associate Professor at the Department of Economics at the University of Porto and Director of the Centre of Research on Higher Education Policy. His research interests focus on the economics of higher education, notably on markets and privatisation, and the development of human capital as a research program. His forthcoming co-edited book (with Christine Musselin) is Reforming Higher Education: Public Policy Design and Implementation (Springer, 2014).