The onset of the eurozone crisis after 2008 has undoubtedly exacerbated the already widening levels of inequality and income polarisation in Europe. As European governments grapple with these problems, policy makers are looking for effective ‘levers’, such as changes in levels of taxation, which might be effective in alleviating these problems and the socio-economic issues that come with them. By analysing the fiscal determinants of income polarisation at the level of European countries, our research has found that a shift away from progressive labour and capital taxation increases the polarisation of incomes, and that public expenditures on social protection, education and economic subsidies are related to a lower degree of polarisation.

We applied a multi-level approach to examine income polarisation at the household and country level across Europe, by using a panel of more than 300,000 households in 26 EU countries between 2003 and 2009. We defined income polarisation as the percentage ratio of disposable household income to the median income of each country and year. We carried out our analysis for incomes both above and below the median separately in order to ensure a clear interpretation of the results.

We also employed econometric tools to combine country level macroeconomic data with microeconomic personal and household level data. The micro level control variables in our analysis comprised typical household head and average household characteristics such as information on sex, age, employment and education. For the macroeconomic explanatory variables we used Eurostat and OECD data on GDP levels, unemployment, inflation, industry share, import share, rates of unionisation and the local stock exchange’s trading index. Finally we included government policy variables, which are the focus of our analysis. This encompasses both detailed general government revenue in the form of taxes on consumption, labour and capital, and expenditure items such as economic affairs (i.e. subsidies), housing and community amenities, health, education and social protection.as shares in GDP. 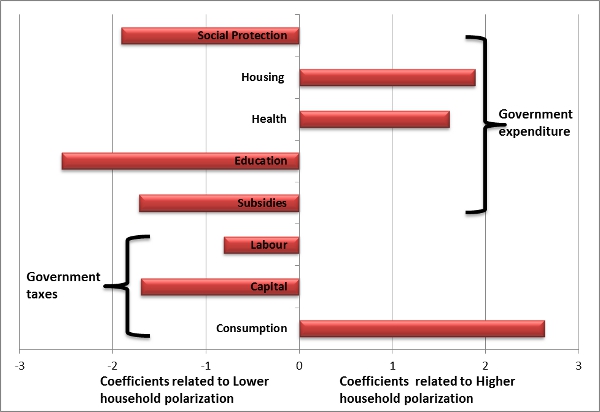 Note: Income polarisation for households equal or above sample median runs from 100% to a maximum of 31,314% of the median income. Therefore positive coefficients for the policy variables are related to higher polarisation. 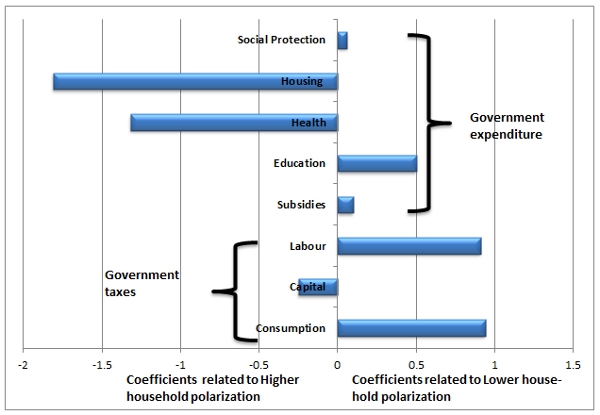 Note: Income polarisation for households equal or below sample median runs from a minimum of -1,525% to 100% of the median income. Therefore positive coefficients for the policy variables are related to lower polarisation.

For the effects of government expenditure on polarisation, expenditures on social protection, subsidies, and to a certain extent education, are significantly related to lower levels of polarisation for households above the median as well as for households that are below. For households above the median, the coefficient for public health expenditures is positive, meaning that a 1 per cent increase in health’s GDP share is correlated with a 1.6 percentage point higher level of polarisation. This is even more surprising when looking at the underlying data. Especially highly egalitarian countries such as Denmark and Austria have high public health care expenditures. However, there are also a few less egalitarian countries such as the UK and Italy which rank quite highly in public expenditures for health. The latter group of countries might drive the positive relationship seen here. Below the median, health expenditures are also related to higher levels of polarisation.

Below the median, public housing expenditures are significantly correlated with higher polarisation status. One possible explanation for this might be that societies which are not able to provide adequate income for large parts of their population (especially below the median income) need to provide for public housing projects in order to ensure the most basic maintenance and reproduction of large parts of their labour force.

We should place more emphasis on polarisation above the median income, where asymmetries are more pronounced. In light of our findings, governments should consider higher levels of both capital and labour taxation, which are suited to reduce income polarisation, given their progressive redistributive power. This should be accompanied by a well-developed system of public expenditures on social protection, education and economic subsidies as well as an active labour market and industrial policy together with a high degree of trade openness.

This article is a version of the wiiw article, The Determinants of Income Polarisation on the Household and Country Level across the EU.

Mario Holzner – Vienna Institute for International Economic Studies
Mario Holzner is an economist at the Vienna Institute for International Economic Studies (wiiw). His research focuses on income distribution, inequality, social policy and the economies of Central East and Southeast Europe. He did a doctorate at the Vienna University of Economics and Business administration (economics). In his recent research, Mario Holzner analysed the determinants of income polarisation . 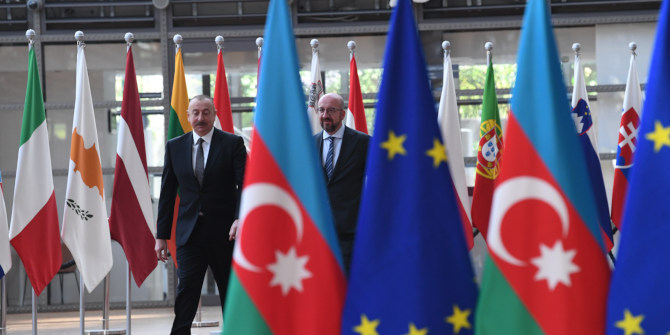 Why EU plans to increase gas imports from Azerbaijan are unrealistic