Brussels blog round-up for 6 – 12 July: Forward for the ECB, Romania’s retro railways, and is Europe the ‘sick man of the world’?

Brussels blog round-up for 6 – 12 July: Forward for the ECB, Romania’s retro railways, and is Europe the ‘sick man of the world’?

Lost in EUrope looks at the absurd situation where a Portuguese minister who had resigned to protest that country’s austerity policies has now returned as Deputy Prime Minister, and will now lead negotiations with the EU/IMF/European Central Bank Troika. Meanwhile Samuel van der Meulen, at Blogactiv.eu looks at the increasing disconnect between the austerity policies being pushed by EU institutions and Europeans,as French Politics says that the IMF has revealed Europe as the ‘sick man of the world’. Meanwhile, Eva Pena at One Europe looks at how the EU might be able to create jobs in the midst of recession.

Last week Croatia became the EU’s 28th member state. One Europe looks at the prospect of further EU enlargement, writing that despite the crisis, the EU continues to be attractive bloc. Despite this, they also say that the reasons why some countries continue to reject or be sceptical of EU membership, such as Iceland and Norway, need to be better understood. Similarly, Debating Europe asks How much ‘More Europe’ is enough Europe? Meanwhile,  Europe & Me looks at how tolerant Europe is towards the LGBT community, finding that countries like the Netherlands, Denmark, and Sweden score relatively highly, while Croatia, Bulgaria, Romania, Italy and Lithuania are less tolerant. They also say that tolerance levels may also be linked to economic freedom.

This week sees Greece secure further bailout funding of €6.8billion from the Troika in order to prevent it from falling into bankruptcy, writes Open Europe. However, according to Lost in EUrope, this agreement comes with the caveat that the country must lose 25,000 civil servants within a year. Nada es Gratis looks at the European Central Bank’s new policy of forward guidance, where it is more open about its future decisions on monetary policy. Such a policy is something of a break with the ECB’s past practice, and is designed to reduce market uncertainty.

Wednesday sees the European Commission submit their proposal for the creation of a new authority to wind up eurozone banks. Lost in EUrope says that the move is mired in a ‘lobby war’, with the Greens and the German Finance Minister Wolfang Schäuble already weighing in with objections. On Thursday, the Commission’s plans are met with skepticism (especially by Germany), according to Open Europe, who says that the proposal may be the worst of all worlds, as it does not come into force until 2015, and will not be large or responsive enough. The FT’s Brussels blog warns us not to forget the European Commission’s guidelines for bank restructuring which will come into force on 1 August. These reforms are important because they will force creditors to shoulder a larger share of bank failure costs.

On Thursday, the FT’s Brussels blog covers the European Parliament’s fisheries committee’s approval of €1.6billion in funds to enlarge EU fishing fleets. This flies against the conventional wisdom that the EU’s fishing fleets are already far too large, they say.

Nada es Gratis considers Spain’s education system, and looks closely at Spain’s private universities, which they find to be disappointing. They argue that in economics, for example, no department is competitive at a European level, whereas other countries have private universities with very successful economics departments. Con Acento Hispano, at Blogactiv.eu looks at a recent survey in Spain that shows growing concerns at corruption levels in the country.

French Politics looks at the potential for former French President, Nicholas Sarkozy, to return to the leadership of the UMP, after a constitutional court rejected his election campaign spending accounts for 2012.

The UK’s government wishes to reduce net immigration to less than 100,000 per year, and has moved to tighten up its student and skilled migrant visa schemes. The Centre for European Reform is concerned that such moves will do great damage to London’s economy, which they say is an engine of prosperity for the rest of the UK. Meanwhile, on Wednesday, UK MEP Mary Honeyball looks at what she calls an ‘embarrassing u-turn’ for the UK government whose Home Secretary, Theresa May, has been forced to agree that the UK should remain part of the European Arrest Warrant scheme.

Writing at Re-Define, Sony Kapoor says that Germany must embrace its ‘crown of thorns’ – its power to influence eurozone policy – and move beyond parochial domestic concerns to use its leadership position to develop more credible solutions to the eurozone crisis.

On Wednesday, Italy’s Supreme Court announced that it will issue its final verdict on Silvio Berlusconi’s tax fraud trial on 30 July, much earlier than was expected, according to Open Europe. As a result of the announcement Berlusconi’s party wants to suspend all political activity in protest, or it will pull out of the coalition, which would leave the coalition of Prime Minister Enrico Letta without a majority.

Croatia, the war, and the future says that nine of Croatia’s banks have been hit by a massive lawsuit concerning their overcharging for bank loans. If all 100,000 claimants are successful, then the banks may be liable for up to 15 billion Kunas (nearly €2billion).

Europe & Me looks at Bulgaria’s three-week old protests against the country’s newly elected government. The protests are against the government’s perceived lack of legitimacy (due to low election turnout), and the appointment of an oligarch as the chief of the national security agency with very little parliamentary debate.

On her blog, Romanian MEP Monica Macovei, looks at the possible intervention of the Prime Minister, Victor Ponta, in a corruption and fraud case that was dropped even though subpoenas and warrants were in place. Meanwhile, Corina Cretu, also a Romanian MEP, looks at access to education for Roma children. She criticizes President Traian Basescu’s recent statements in support of cutting allocations to Roma, as not being helpful in the context of current demographic and educational issues.

European Geostrategy looks at Europe’s influence in the Indo-Pacific region. They say that more cooperation between Britain and France is needed if both countries are to continue to pursue and amplify their foreign policies in that region. Meanwhile, the FRIDE blog has six challenges and threats for Spain in the Syrian civil war. Spain would like to play more of a mediation role between the Syrian opposition and government forces.

As the transatlantic row over alleged surveillance of the EU by the US continues, Au Cafe de L’Europe gives, what they term, a realistic and strategic reading of the situation. They say that the revelations should have been little surprise to Europe’s governments, and that it is likely that they will have little real impact on transatlantic relations. German Joys takes a different view, writing that the revelations show that the US is spitting on the privacy of the non-English speaking world. This week also sees the beginning of free trade negotiations between the US and the EU. Lost in EUrope says that it is very difficult to find out what has actually been discussed thus far, and as a result, will be trying to collate what information is available.

EUkraine, writing at Blogactiv.eu advises the Ukraine not to ‘flirt’ with the idea of a Customs Union with Russia, given its recent Association Agreement with the EU. New Eastern Europe looks at the evolution of presidential power in Russia, sparked by the death in May of Sergei Alexeyev, one of the fathers of Russia’s post-Soviet 1993 constitution.

Craig Willy has a critical summary of Emmanuel Todd’s L’Invention de L’Europe, which looks at the rise of modernity and the diversity of values in Europe since 1500. Meanwhile, KielspratinEurope looks at the role of the citizen, and of the state, saying that representative democracy does not give the political class licence to do what they wish.

Writing at Blogactiv.eu, Duncan Freeman looks at the EU’s relationship with China. He says that, by far, the weight of Germany’s relationship outweighs that of the other member states. This was also shown by Germany’s stance on the recent trade dispute with China over solar panels, where it voted against the EU’s desire to press anti-dumping duties on China. 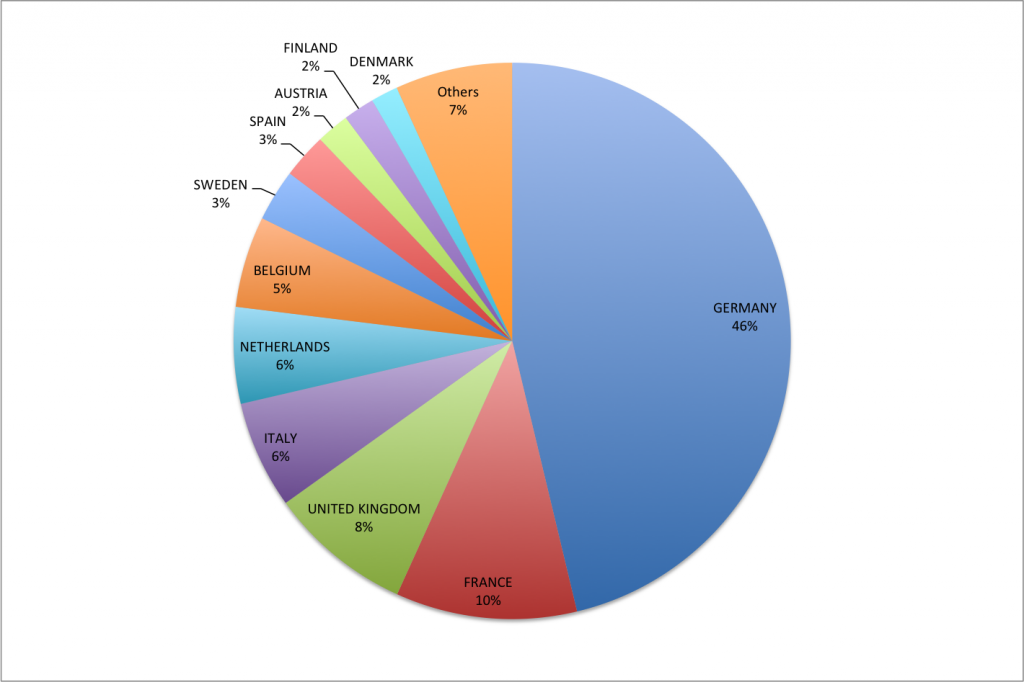 What has President of the European Council, Herman van Rompuy been up to this week? This week he helped to kick off the ‘Te Gek’ mental health project in Brussels, and posted a video of his visit to Croatia, Kosovo, and Serbia.

Jon Worth takes a trip on Romania’s retro railways.

Reuniting Europe at Blogactiv.eu wonders who European Commission President Jose Manuel Barroso might be talking to when he stepped out of an important meeting last week in Lithuania, while Open Europe asks if European Parliament President Martin Schulz has been receiving some good PR advice recently, after he endorsed a call to give EU powers back to some member states.

Brussels blog round-up for 29 December – 4 January: guaranteeing jobs for the unemployed, an uncertain future for Václav Klaus, and should academics make blogging their New Year’s resolution?

Brussels blog round up 7 – 13 December: bank supervision, EU defence policy, and does migration make you happier?