In 2011, the Basque separatist and nationalist group, ETA, declared the definitive cessation of its armed activity, bringing more than five decades of paramilitary activities to an end. Carrie Hamilton’s book, ‘Women and ETA’ examines the history and evolution of ETA from a gender perspective, charting the often very different roles of men and women in the organisation since the 1970s. Ana Varela-Rey praises the book as an invaluable contribution to gender and political violence studies, as well as its use of extensive oral history interviews with women members and supporters of ETA. 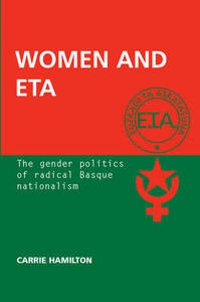 Though reissued earlier this year, Women and ETA: The Gender Politics of Radical Basque Nationalism was first published in 2007, just after a ceasefire which started in March 2006, but was then was broken in December 2006 with the attack on Madrid’s Barajas Airport. Since that time there have been a number of developments around ETA, some of them of significant importance. Some analyses highlight the importance of the Airport attack as the turning point for the supporters of ETA and the peace process that started in 2011, with the announcement of the definitive cessation of ETA’s armed activity. Carrie Hamilton’s book gives us the opportunity, in light of these recent developments, to analyse the origins of ETA and the evolution of the Basque society from a gender perspective, which is quite a unique contribution.

One of the most significant aspects of this book is the gathering of an important sample of published sources, archival material, and oral history interviews. Access to data is a common problem that researchers face when analysing groups who use violence to reach their political objectives. Since this type of group works underground, it is often very difficult to obtain primary sources of information. It is worth highlighting that the documents quoted in the book are not easy to find, as many are ETA’s own internal documents. Nevertheless, researchers in this field are lucky to count the Lazkaoko Beneditarren Fundazioa (Benedictine Lazkao Foundation) as part of the collection of documents, which were gathered by Father Agirre.

But Hamilton does not only rely on archive data; her interviews with women members and supporters of ETA represent the valuable collection and generation of new data that only exists in the form of memories. In this regard, this represents a great contribution to the scientific community. The interviews were conducted in 1996 and 1997 with women who were part of ETA and the radical Basque nationalism from the mid-1960s to the early 1980s (p. 7). The author also mentions in some parts of the book, the “younger women”, providing a generational perspective. It might be interesting for future research to investigate whether this differentiation has any implications regarding their participation in ETA.

In the introduction, the author frames the research in the nationalist and gender perspectives and establishes the difference between Basque nationalism and radical Basque nationalism. Chapters 1, 2 and 3 examine the participation of women in ETA evolving from the private space to the public space. Chapter 1 focuses on the role of women as “mothers and housekeepers in preserving and transmitting Basque culture and language inside the home” (p. 24) and how this is translated into public spaces. Women were understood as “an important factor in the political formation of some future activists” (p. 33). This idea of caregiver is discussed throughout the book in relation to different aspects. In Chapter 2, two news scenarios are analysed: the Church and the cuadrilla (friendship group). These two scenarios provided different experiences to men and women and influenced them in different manners for their participation in ETA. Chapter 3 reflects on ETA’s emergence into the public arena of and its “open conflict with Spanish State” (p. 62). ETA’s early actions were aimed at reconquering public spaces that were under domain of Franco’s dictatorship by, for example, flying an Ikurriña (Basque flag). The escalation of ETA’s actions came to a tipping point in terms of public expression and attention with the Burgos trial in 1970.

The militarisation of ETA and how that implied different roles for men and women is analysed in Chapter 4. In this regard, the book highlights an innovative distinction between ETA women in exile in the French Basque country and those in the Spanish Basque country (p. 94). In Chapter 5 the direct participation in ETA by women is addressed. Here, the author discusses the stereotypes present in the press of women participating in ETA, and confronts them with the fact that there is no difference between women and men in their personal and political commitment (p. 123).

Chapter 6 details the experiences of arrest and prison for these women. For many, prison was seen as a learning space (p. 142), in the sense of discovering new realities that were translated into a major commitment to their feminist ideals. This greater engagement with feminism and its attempts to introduce it into radical nationalism is explained in Chapter 7. Finally, in Chapter 8 the author explores the different roles of women in ETA in relation to social representations inside and outside of the organisation.

Overall, the book follows a sequential line in which different spaces and different levels of analysis are examined. Women and ETA is a great contribution to gender and political violence studies. Hamilton clearly decodes the role of gender in the formation and development of ETA and how it was framed in the mind-set of that particular time. Also, it is worth highlighting again the great value of the research material that the author was able to gather; not an easy task since people in the Basque country are usually reluctant to speak about ETA and the political situation. Hence, this book is not only worthy of scholarly reflection, but could also be useful for those with interest in the Basque society and those actively working in the peace process.