Trust in European justice institutions is markedly lower in Southern and Eastern Europe, but legitimacy also requires that institutions meet substantive requirements to legitimise their power and structure.

Trust in European justice institutions is markedly lower in Southern and Eastern Europe, but legitimacy also requires that institutions meet substantive requirements to legitimise their power and structure.

Trust in legal systems, the courts, and police varies widely across Europe, especially in former communist countries such as Ukraine, Russia and Bulgaria. Jonathan Jackson and the FIDUCIA project team argue that current social survey statistics provide only a partial picture. While they do show how much people trust institutions across Europe, they do not address whether or not the institutions meet commonly agreed standards of ‘normative legitimacy’ that justify their existing structure and power in society. By combining European level survey data with institutional measures, a more complete picture of the true legitimacy of Europe’s courts, police and legal systems can be gained.

Europeans differ widely when it comes to trusting their legal systems and believing that the police and criminal courts have the right to exercise legitimate authority. Recent findings from the European Social Survey (ESS) show that Scandinavian law authorities enjoy the highest levels of respect and trust across 26 European countries, while a deep suspicion of police and courts remains entrenched in post-communist countries. Public trust is low in the Ukraine, Russia and Israel and some southern European countries, including Greece.

Levels of trust largely mirror population beliefs about the legitimacy of legal authorities. Switzerland, Finland and Denmark all score high levels of trust and legitimacy in the police and courts, as shown by Figures 1 and 2. Public assessments of the legitimacy of these authorities are markedly lower in southern and Eastern Europe, and most notably in Greece, Portugal, Russia, the Ukraine, Bulgaria and Israel. In the UK and Ireland, residents consistently trusted, and legitimised, their police and court systems at well above average levels, although to a less extent than their Scandinavian counterparts. 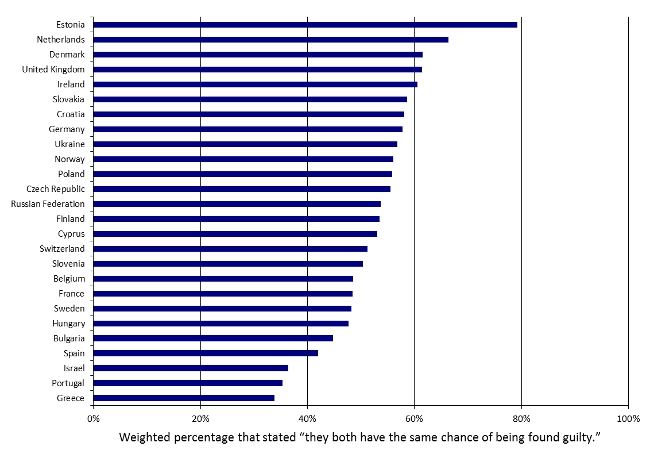 Note: ESS R5 respondents were asked: “Suppose two people from different race or ethnic groups each appear in court, charged with an identical crime they did not commit. Choose an answer from this card to show who you think would be more likely to be found guilty.” Figure 1 plots the (weighted) proportions of people who said that “they both have the same chance of being found guilty.”

Figure 2: Legitimacy: felt obligation to obey the police, by country 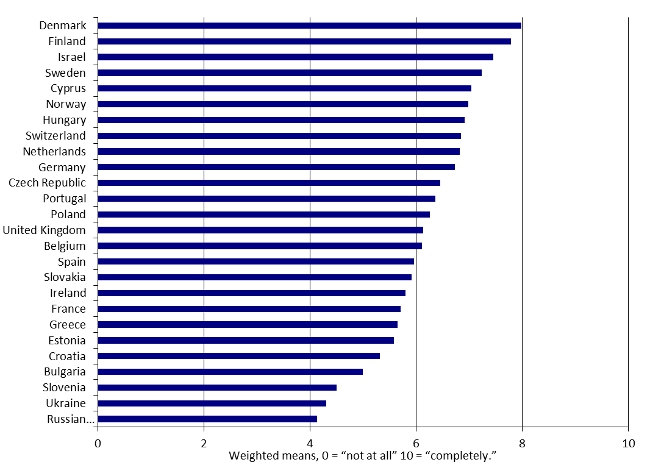 Note: ESS R5 respondents were asked: “To what extent is it your duty to do what the police tell you even if you don’t understand or agree with the reasons.” (11-point scale, running from ‘not at all’ to ‘completely’). Figure 2 plots the (weighted) means, converted to 0 “not at all” to 1 “completely.”

Legitimacy is a key concept in criminology, and the ESS defines legitimacy as public beliefs about the right of the police and criminal courts to have power and exercise authority. This is ’empirical’ legitimacy, in which the right to exercise power is ‘a matter of fact’, where those who are subject to authority confer legitimacy on that authority. The governed recognise an obligation to obey power-holders and believe that power-holders act according to appropriate normative and ethical frameworks. Legitimacy then encourages people to self-regulate and otherwise support the goals of criminal justice institutions.

On this account empirical legitimacy has two dimensions. On the one hand, power transformed into rightful authority is exhibited when people accept that justice institutions have the right to issue certain sorts of commands, and that those commands should be obeyed. This is felt obligation to obey: people internalize the value that they should obey the law and abide by the directives of justice officials. On the other hand, justification of the holding of power is created when individuals believe that justice institutions have a set of moral values that align with their own. This is moral alignment, in which normative justifiability of power creates political obligations through a sense of shared goals.

But surveys like the ESS only tell half the story. The term ‘legitimacy’ is also used by political philosophers to describe whether states (or state institutions) meet certain desirable standards. In political debate we naturally and properly want to make value judgments about the extent to which regimes (or institutions within regimes) exercise legitimate authority, judged against external or ‘objective’ criteria. This is ‘normative’ legitimacy, and the distinction between empirical and normative legitimacy is a very real one, because one can envisage the possibility of regimes that enjoy substantial popular support – which can thus be said to enjoy ‘empirical legitimacy’ – whilst totally failing to meet basic standards of ‘normative legitimacy’. Nazi Germany and the Khmer Rouge government are obvious examples, at least in their early periods.

An important objective of our on-going project is to combine ESS data on empirical legitimacy with national-level data based on ‘objective’ criteria against which the legitimacy of an authority or institution might be judged. Normative legitimacy refers to whether the actions of authorities meet certain substantive requirements (usually of justice and rationality) for which objective evidence can be adduced. Legitimacy is here a property of organizational performance and institutional structure, based on the arrangements, practices and performance of justice systems across Europe. It is conferred by or grounded in things that the justice system does, and in the objective relationships between system and citizen (such as those indicated by a freedom from arbitrary arrest). System-conferred legitimacy can be usefully measured by national-level statistics concerning efficiency, accountability, legality and so forth.

Thus far the ESS data paint a fascinating picture of Europe and beyond. Do people see the structures of authority that govern their lives as generally fair and effective? Do their country’s institutions inspire trust or suspicion? Is the system of criminal justice justified in its possession of power?

But the survey data need to be expanded to include national-level data on institutional arrangements and practice, if the national pictures are to be complete and rounded. With this goal in mind we are working to produce a system of European social indicators of trust and legitimacy in the context of criminal justice – to measure not just the extent to which people trust institutions of justice and believe that legal authorities are legitimate, but also whether the justice institutions meet certain commonly agreed standards that legitimise their existing structure and power in society.

Criminal justice institutions are often measured according to crime levels, clear-up rates, convictions and so forth. Our system of social indicators of public trust and institutional legitimacy (with legitimacy being both citizen-conferred and system-conferred) hope to expand the focus – to include not just effectiveness and efficiency but also fairness and the legitimate use of rightful power and authority, and this means grappling with age old questions about the nature of legitimacy, accountability and justification of power. This is a difficult task that will create much debate, discussion and disagreement. But it is also an important one.

This article is based on the FIDUCIA report, Trust and legitimacy across Europe. Click here for more details about the FIDUCIA project.

Greek society is now stuck between neo-Nazism, racism and austerity