The SPD’s reforms of the early 2000s show why liberalising labour markets can be electorally beneficial for centre-left parties.

The SPD’s reforms of the early 2000s show why liberalising labour markets can be electorally beneficial for centre-left parties.

Why do centre-left parties liberalise labour markets against the interests of their traditional worker constituencies? Using the case of the SPD in Germany, Patrick Lunz puts forward an explanation focused on a party’s electoral position. He notes that the alignment of the German party system ensured the SPD would face only weak competition from parties to their left, while long-term trends indicated that citizens were becoming more accepting of a reduction in the generosity of the German welfare state. While it might have appeared counter-intuitive, the social democratic government therefore liberalised labour markets to protect their long-term electoral interests.

I will make the case for a counter-intuitive answer, arguing that the German social democratic government implemented the reforms precisely because of electoral interests. The rationale is two-fold and relates to changes in labour market policy supply and policy demand.

The political space of party competition…

I expect office-seeking social democratic parties to liberalise labour markets, i.e. pivot towards the median voter (centripetal competition), if they hope to win more electoral support in the centre than lose on the left or become the pivotal player in the coalition bargaining. This is what happened in Germany: with the move to the centre, the social democratic party (SPD) sought to maximise its office payoffs. The Figure below shows the German party system in 2002. 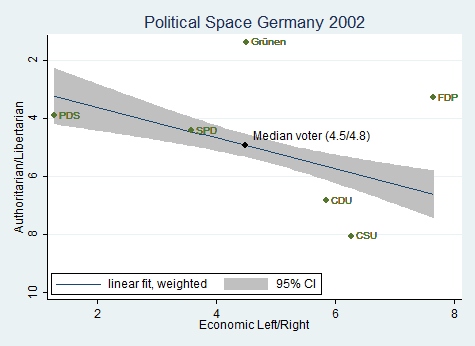 Note: The figure shows the location of the major German parties (PDS, SPD, Greens/Die Grünen, CDU/CSU, and FDP) in 2002 on a left-right/authoritarian-libertarian scale. The dot shows the position of the median voter, while the line shows the estimated ‘axis of competition’ (with a shaded 95 per cent confidence interval). Based on author’s own calculations, data from Chapel Hills Expert Survey.

The Figure shows only weak electoral competition to the left of the SPD. Only 4 per cent of the voters in 1998 cast a ballot for a party to the left of the left. The far-left PDS – now the Linkspartei – was at the time not taken as a serious challenger, as the party was still exclusively rooted in East Germany and performed very poorly in the West. Hence, the SPD had reason to believe that the pivot was safe, establishing itself as linchpin for any coalition.

Centripetal pivoting holds particular appeal in the coalition-based German political system. If close to the median voter, the SPD wields broad attraction to two kingmakers in the system: both the liberal FDP on the libertarian axis and the Greens (Grünen) on the economic axis are potential coalition partners. A grand coalition with the conservative CDU is equally imaginable, be it as the junior partner as in 2005-2009. Finally, the Linkspartei has little choice but to seek an alliance with the SPD if it wants to hold executive power.

What is more, the SPD enjoyed more leeway to enact retrenchment without having to fear that dissatisfied voters will turn to the main opposition party, because the CDU has drifted to the right. Hence, the SPD leadership had strong reasons to believe that centripetal pivoting would increase their chances of holding executive office.

… and the shrinking majority of welfare state defenders

Second, social democratic governments pivot to the centre only under the catalyst of shifting policy demand, leading to a slide in electoral support. Hence, I expect to see a shift in public opinion in Germany towards policies which reduce the generosity of the welfare state (often referred to as welfare state ‘retrenchment’). Indeed, crucial segments of the electorate did turn more favourably to welfare state retrenchment. This shift disproportionately benefited the conservative CDU and liberal FDP and forced the SPD to reposition itself in the party landscape.

While in 1994 an overwhelming majority of 90 per cent wanted either to expand or sustain the welfare state, the percentage had dropped in 2004 to 75 per cent. Admittedly, this was still a large majority. Yet, it is worth looking beyond the aggregate numbers to discover two interesting issues. First, the share of respondents advocating an expansion of the welfare state fell even further from 36.7 to 21.7 per cent. Second, and more interestingly, what does this shift entail for the system of party competition? In order to get an idea of the distributional effects, let’s compare the share of party supporters in each of the preference groups (reduce/sustain/expand) with the overall party support. 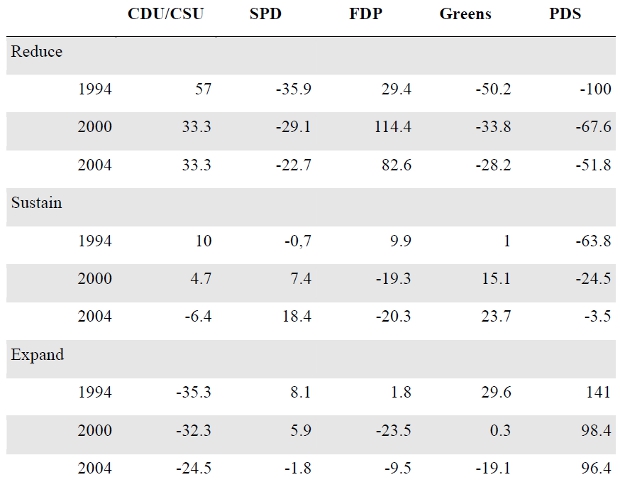 Note: The table indicates the level of support for the major parties within each preference group: those who favour ‘reducing’ the welfare state, ‘sustaining’ it, or ‘expanding’ it. A positive number indicates that a party has a higher percentage of support within this preference group than it does within the electorate as a whole: e.g. support for the SPD was 8.1 per cent higher among those who wanted to expand the welfare state in 1994 than it was among the electorate as a whole. Adapted from Picot (2012).

Prior to the reforms in 2000, the SPD only had a larger voter reservoir compared to the CDU among respondents favouring welfare state expansion. Yet, this group was shrinking in numbers and will continue to do so in the future. Among the crucial growing group advocating welfare state retrenchment, the SPD trailed its main opponent by 65 per cent. To rephrase the new left’s catchphrase: “to liberalise or to die”, this was the question for the German social democrats. The SPD went for the former.

The findings can partly account for the unfreezing of the European welfare state. In contrast to mainstream theories elaborating on political gridlock, this article has developed an electorally motivated account for labour market reforms. Political spaces between countries vary, as do the objectives and electoral strategies of different social democratic parties, not to mention the actual preferences of voters. If social democratic governments liberalise labour markets, it is not because there is no alternative; it is because they strategically decide to do so.

This contribution draws on the author’s recent LEQS working paper. It was written in a personal capacity and does not reflect the views of the German Federal Foreign Office.

With the final votes counted, Fidesz has secured a ‘super-majority’ in Hungary, but it is questionable how fair the election really was 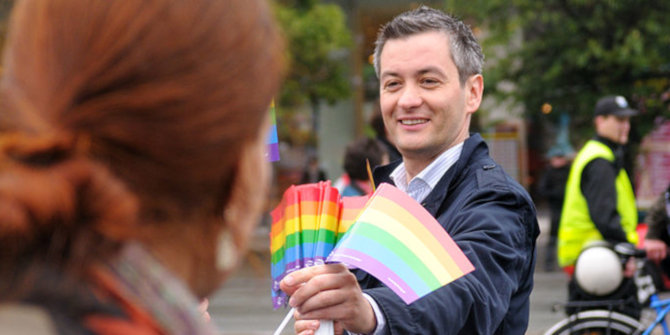