The fragility of banks in the Eurozone’s periphery means that proposals for a European wide bank resolution fund are likely doomed to fail.

The fragility of banks in the Eurozone’s periphery means that proposals for a European wide bank resolution fund are likely doomed to fail.

Many countries used public funds to bail out struggling banks at the onset of the financial crisis. Now, with austerity still biting, the chances of further bank bailouts by national authorities are relatively slim. Clemens Fuest examines Internal Market Commissioner Michel Barnier’s recent proposals for the European Commission to take responsibility for bank restructuring and the creation of a European bank resolution fund. While he finds the proposals to be sound, he also argues that the issue of large numbers of non-performing loans held by countries in the Eurozone’s periphery must first be solved, and banks and depositors in the core region need to be convinced of the benefits of risk sharing.

What is the minimum amount of political integration required to allow the Eurozone to survive? Views about the answer to this question differ widely, but many people agree that the creation of a banking union is part of that minimum requirement. The concept of banking union includes four elements: banking regulation, banking supervision, bank resolution or restructuring, and deposit insurance. While all of these elements should be organized at the supranational or Eurozone level, the role of the public sector in designing and financing these different elements is subject to debate. So far, progress has been made with regard to the first two elements – common banking regulation, which is covered by the fourth Capital Requirements Directive, and common banking supervision, which will be taken over by the ECB.

For the third element, the resolution or restructuring of failed banks, Internal Market Commissioner Michel Barnier has made a bold proposal. He wants the European Commission to take on the responsibility to trigger and carry out bank restructurings, and he wants to introduce a European bank resolution fund. Why?

Currently the stabilization and restructuring of failed banks is a responsibility of national governments. Michel Barnier argues that this raises three issues:

First, in the recent economic crisis, many countries have used public funds to bail out failing banks. This has increased government debt, adding to the financial difficulties of the public sector caused by the economic downturn. Doubts about the sustainability of public debt have questioned the ability of governments to finance further bank bailouts, leading to a downward spiral of declining trust in the financial solidity of both national governments and national banking systems.

Second, given the high degree of economic integration in Europe, bank resolution in one country has important economic effects on other countries, and national governments may not take these effects into account appropriately when they deal with banking crises.

Third, banks residing in countries with more solid public finances will benefit from lower funding costs than banks from countries with highly indebted governments because investors will expect that the former are more likely to be backed by their governments in the event of a banking crisis than the latter. This distorts competition between banks in the European Internal Market.

To address these issues, Barnier suggests the following changes. The responsibility to trigger and carry out bank resolutions will be taken over by the European Commission. Losses incurred will be borne primarily by shareholders and creditors of banks. If additional funds are needed, they will be provided by a newly created fund. This fund will be financed via contributions levied from all banks in the participating countries. It can borrow and service the debt with future contributions. The idea is that this fund will only be used if private creditors of the bank have at least absorbed losses amounting to 8 per cent of the bank’s overall liabilities.

Some of the principles guiding the proposal are very reasonable and will enjoy widespread support. This applies in particular to the idea that private investors should bear the losses of failed banks, not the taxpayers. Of course, endorsing this principle is not the same as putting it into practice. In order to make this work the concepts in the proposal need to be pushed further. It is not enough to stipulate that there should be a minimum contribution of private investors. Such a bail-in will only happen if it does not undermine financial stability. To ensure that each bank should be obliged to demonstrate that enough of its capital is held by investors which are able to absorb losses. This could be pension funds or life insurance companies with a long investment horizon, which can take losses and make up for them over time. Clearly, financial liabilities labeled as ‘bail-inable’ debt will be costly, so that banks will want to minimize their use. Therefore regulation and effective supervision is required which makes sure that all banks have a minimum level of liabilities that can be written down or converted without risking a crisis of the financial system. 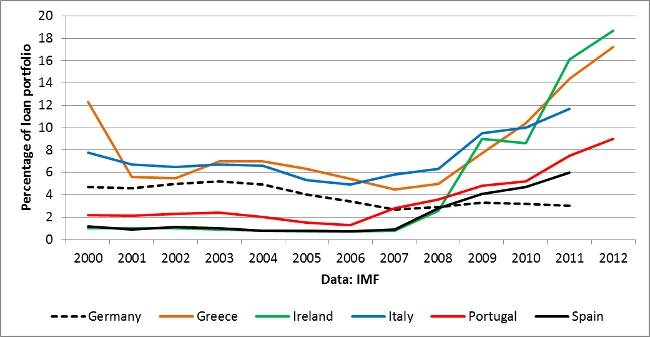 While these adjustments can be made relatively easily, there is another issue which is much more difficult. The proposal introduces an element of joint liability for all banks in the participating countries which may have drastic consequences. The current economic situation is highly asymmetric. One indicator of this asymmetry is the share of credits in the national banking systems (see Figure 1, above). Banks from countries in the core of the Eurozone and their depositors will have little appetite to enter a European resolution fund arrangement. The reason is that this arrangement might force them to bear a large part of the unrealized losses lurking in the balance sheets of banks in the periphery.

How can this be addressed? It would be necessary to carry out an asset review which provides a realistic assessment of the quality of existing bank assets. The ECB plans to undertake such an assessment in 2014, but the question is whether it will be carried out in a way that convinces the banks and depositors in all participating countries that entering a risk sharing arrangement is a good idea. If it is, it will involve a considerable writedown of existing asset values, and the losses will have to be borne by existing shareholders and creditors of banks. At least this is what the principles guiding the European banking union project suggest.

Alternatively, national governments could engage in yet another round of bank bailouts, but that would probably be politically infeasible. Given this, an asset review which convinces enough people that more risk sharing is acceptable is likely to spook capital markets. Finding a solution to this ‘legacy asset’ issue is difficult and requires the will to compromise and the courage to do unpopular things. But before this is achieved, concepts like the Barnier proposal are doomed to fail.

Clemens Fuest – Oxford University
Clemens Fuest is Research Director of the Oxford University Centre for Business Taxation and Professor of Business Taxation. He is a research fellow of CESifo and IZA and advisory editor of the Canadian Journal of Economics. He is a member of the Academic Advisory Board of the German Federal Ministry of Finance and member of the Academic Advisory Board of Ernst and Young AG, Germany.

Threatening to leave the eurozone may be Ireland’s only way to break the link between its sovereign and bank debt.

If we are to prevent another lost decade, we need macroeconomic policies to restore economic activity, and public investment to power sustained and productive growth.