Barry Scott Zellen explores how the U.S. has had to adapt to the new asymmetrical world of conflict that followed the end of the Cold War and that culminates with today’s global jihadist movements. Featuring the works of key theorists such as John Arquilla, Thomas P.M. Barnett, Arthur K. Cebrowski, and David Ronfeldt, this book is to be recommended to students of strategic studies willing to bear with this dense study from beginning to end, writes Andrew McCracken. 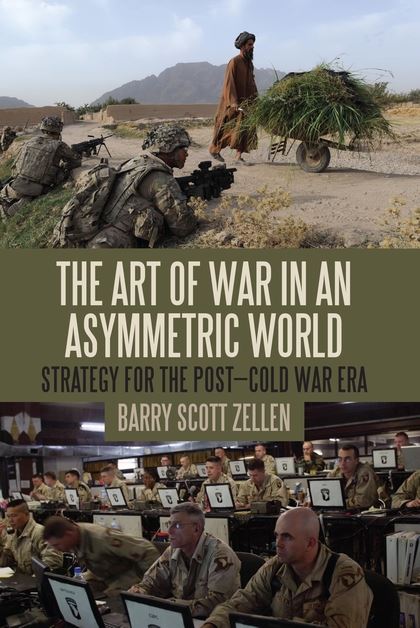 The Art of War in an Asymmetric World. Barry Scott Zellen. Bloomsbury. June 2012.

In the early months of George W Bush’s presidency, America’s geo-strategic dominance and self-confidence reached its zenith. The hubris of the nation’s leaders was encapsulated by a senior White House advisor – believed to have been the president’s then chief of staff, Karl Rove – who brayed to a New York Times reporter: “We’re an empire now, and when we act, we create our own reality. And while you’re studying that reality – judiciously, as you will – we’ll act again, creating other new realities, which you can study too, and that’s how things will sort out. We’re history’s actors … and you, all of you, will be left to just study what we do.”

Integral to the United States’ vision of itself was, and remains, the unprecedented dominance of its military. Al-Qaeda’s attack on the US presented the world’s sole superpower with an opportunity to test its newly conceptualised network-centric warfare (NCW), which, in the words of one general, promised “today’s commanders the kind of Olympian perspective that Homer had given his gods.” If the ensuing Global War on Terror presented irrefutable proof that America’s armed forces were every bit as irresistible in conventional war as its proponents had hoped, the failures which followed presented the country’s military planners with a new problem: why did the US, unstoppable in war, appear so inept at winning the peace?

The consensus among many scholars of strategic studies is that the US had forgotten that war is dialectical; therefore, if you cannot lose on the battlefield, your enemies will fight you elsewhere. The Art of War in an Asymmetric World – or AWAW, to use the sort of acronym so beloved of the armed forces – is both a history of military planning in the US over the past few decades and a prescription aimed at what the author considers to be its flaws. Barry Scott Zellen writes: “indigenous tribes and the most modern of states are waging a new and very asymmetric kind of conflict, one that is redefining the very building blocks of world order”.

In AWAW, Zellen synthesises the academic discourse surrounding America’s military strategy over the past few decades. Inevitably for such a study, the war on terror looms large throughout; subject of the book’s central chapter, the conflict also informs the entirety of AWAW.

The books often laudatory syntheses and arguments are somewhat undermined by the absence of an introduction. AWAW is divided into five sizeable chapters, the first two of which jar strongly enough with the proceeding three, jumping as they do from past conflicts to the continuing “long war”, that the lack of an introductory overview becomes all the more egregious. In addition to this structural failing, the work itself is an esoteric tome unlikely to appeal to readers unfamiliar with the field. Typically for strategic studies, familiarity with the works of Sun Tzu, Clausewitz and lesser theorists, in addition to a grounding in how the war on terror has unfolded, is taken as a given. Indubitably, this is not Contemporary Warfare for Dummies.

For those with some knowledge of strategic studies – and who are willing to stomach phrasing such as “conceptions of space may again become symbolic and relational rather than geometric and physical” – AWAW has much to offer. Its first two chapters summarise the key pre-9/11 debates within America’s military and intellectual community, and represent an intriguing take on the evolution of conflict since the 1990s. For Zellen, Mexico’s Zapatista rebellion was an early template of a weaker, non-state force employing technology in a manner unforeseen by its enemy. The book elucidates how the rebels, though never a match for the government’s troops over a protracted military conflict, outmaneuvered the state via an innovative internet campaign which saw their cause spread from its base to desktops around the globe; Zellen argues that the rebellion represents history’s “first true cyberwar”.

AWAW’s chapter on the war on terror is an account of how the conflict has affected the debate on US military strategy and tactics. Much of this debate has pitted proponents of the shock and awe of NCW against those who favoured the “population-centric” counterinsurgency warfare (COIN). Zellen skillfully outlines the arguments of each, and perhaps unsurprisingly argues that a synthesis between the two needs to be found, providing the US with the means to topple its orthodox foes whilst being better able to secure the peace in the aftermath. Yet a discussion of one aspect of the war on terror, America’s decision to turn to torture and assassination, is conspicuously absent from Zellen’s book.

Faced with insurmountable asymmetry on the battlefield, America’s enemies have sought to take the fighting to the urban areas, where distinguishing insurgent from civilian can be an impossible task, with lethal consequences. Twelve years of fighting the war on terror among civilians has taught America’s military, at all levels, the paramount importance of winning hearts and minds. Yet this did not prevent the US from reintroducing and systematising torture, a policy subsequently replaced by the current president, a Nobel Peace Prize laureate, with a massively expanded drone assassination programme.

In his recently published memoirs, General McChrystal, who was fired for criticising Obama, addressed the targeted killing programme: “What scares me about drone strikes is how they are perceived around the world. They are hated on a visceral level, even by people who’ve never seen one or seen the effects of one.” McChrystal’s implicit surprise at the unpopularity of drones will have been risible to many, but Zellen, who clearly considers such troubling tactics outside his purview, does not even address the issue.

In the book’s concluding chapter, Zellen argues against a conceptualisation of the world with the nation-state as the primary unit, and urges a greater awareness of less neatly defined human groupings – tribes and “ethereal” religious identities. He argues that, in pursuing its goals, the US must ensure that it remains the strongest tribe: “But strength must be defined by more than the material; it is also moral”. It would have been interesting to read the thoughts of a writer obviously close to the US military on what the long term implications of extrajudicial assassination, waterboarding and perpetual surveillance of the American populace are likely to be for this moral strength.

This flaw notwithstanding, Zellen’s expertise is obvious, and AWAW benefits from the impressive range of theorists upon which it draws. Written with an informed audience in mind, this book is to be recommended to students of strategic studies willing to bear with this dense study from beginning to end.

Andrew McCracken
Andrew McCracken graduated from LSE in 2010 with an MSc in the Theory and History of International Relations. His academic interests include Chinese history, the international relations of East Asia and strategic studies. He has studied and worked in China and currently works for a global risk management and investigations company in London.