Ed Miliband, the leader of the UK’s Labour Party, decided not to support the British government’s call for military action against Syria. Eunice Goes argues that Miliband’s position on Syria has the merit of offering British voters a clear Labour approach to foreign policy that is distinct from that of David Cameron’s governing coalition, and his predecessors Tony Blair and Gordon Brown.

In the past little while the leader of the UK’s Labour Party, Ed Miliband, has been accused of many things. Downing Street accused him of ‘flipping and flopping’, ‘buggering around’ and ‘playing politics’ whilst others, including some Labour voices, blamed Miliband for almost single-handedly diminishing the role of the United Kingdom in the international stage and for damaging the ever so-special relationship. Ed Miliband got all this flak because the Labour Party refused to support the government’s decision to participate in almost immediate air strikes against the Syrian regime of Bashar al-Assad. 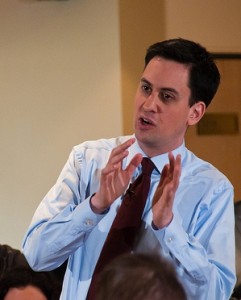 It is true that Miliband’s delivery in the House of Commons on Thursday, when 285 MPs defeated the government’s motion, was not amongst his best. He hesitated, stumbled and at times he did not look sure of his own position. It is also quite likely that Miliband changed his mind about supporting the Prime Minister call for military action against Syria and that an element of internal party politics might have played a role in his decision. That said, Miliband’s position on Syria has the merit of offering British voters a clear Labour approach to foreign policy that is distinct from the coalition’s and from New Labour’s.

Given the recent doubts about the coherence of Ed Miliband’s project, his stance on Syria is surprisingly clear, distinctive and bold. Indeed, the rationale for his decision to not to support the government’s motion on Thursday night gives us an interesting glimpse of how an Ed Miliband government will approach foreign policy.

Judging from his own explanations, Miliband’s vision is defined by his commitment to international law, diplomatic methods and due process. The Labour leader has not ruled out military intervention in Syria but he first wants to explore all diplomatic and legal avenues before such radical course of action is contemplated. Thus, he has insisted on the UN route, which has not been well explored (it is true that China and Russia have stalled the process but it is equally true that the 2012 UN-sponsored peace initiative that was led by Kofi Annan never received the international backing it deserved) and he has stressed that “there are other routes than military means to actually help the people of Syria”.

The second feature of Miliband’s stance has to do with process. He favours a deliberative approach to decision-making and as such he prefers to take decisions after weighting all the available evidence, learning lessons from the past and analysing the potential consequences of a particular decision. He also wants to show that political decisions take public opinion into account.

This is an approach to policy-making that infuriates many of Labour’s backbenchers and which is at odds with our mediatised political world where politicians are expected to make life-and-death decisions in nanoseconds. But as the outcome of the 2003 invasion of Iraq suggests, ill-thought out and hasty decisions which are based on flimsy evidence carry a heavy human and material cost. Thus, there are good reasons to think that this deliberative and cautious approach to policy-making might result in better decisions.

Impact of Miliband’s stance on Syria

It is unlikely that Miliband’s stance on Syria will have a direct impact on how the British public views the Labour Party or its leader’s ability to run the country. His position might encourage some niche sections of the electorate to vote Labour in 2015 however general elections are rarely decided on foreign policy issues.

But Miliband might benefit from some positive indirect effects that might put a spring in his step. The first indirect effect is related to internal party politics. As his decision reflects the majority opinion of his party (though there are of course Labour MPs who equated Miliband’s stance with isolationism), those MPs that just last month were questioning his leadership skills might give him now the benefit of the doubt.

The other potential positive indirect effect can be felt on Miliband’s own behaviour. Despite the initial hesitations, Miliband’s approach is quite bold. It is bold because his stance is in stark contrast with New Labour’s liberal interventionism that was strong on moral posturing but occasionally cavalier about facts and due process. Moreover, his position also contrasts with the typical default position of the British foreign policy establishment according to which Britain should always support the initiatives of the United States and ‘punch above its weight’. As he realises that public opinion is actually behind him (60% of British public oppose military action against Syria) and that the sky did not fall over his head, the Labour leader might gain the courage to defend his own convictions and present an equally clear, distinctive and bold Labour vision for Britain in 2015.

This article originally appeared at our sister blog, British Politics and Policy at LSE