Over recent decades it has become the norm for central banks to be made formally independent from governments and political actors. Laurenz Ennser-Jedenastik writes that despite this insulation from the world of politics, the political affiliations and ideological positions of central bank governors have still played a significant role in their appointments and removal from office. Outlining the results of a study across 30 European countries, he shows that central bank governors who are more closely aligned with a country’s government are less likely to be removed from office than other governors.

The global financial crisis has reminded us of the crucial role that central banks play in our economies. While governments in the United States and Europe have been struggling to overcome political opposition to their policies, central bankers were in a better position to act boldly in the face of economic disaster, largely because they had no need to pay attention to public opinion or legislative majorities. In many countries the governors of central banks are, in fact, among the most independent and most powerful public servants.

Yet, this does not mean that they act completely outside of the political realm. Quite to the contrary, the fact that many central banks are formally independent institutions creates an incentive for politicians to appoint governors who have similar ideological leanings. In a recent paper I assemble biographical data on all central bank governors in 30 European democracies between 1945 and 2012 to examine their partisan background and its effect on survival in office. The countries include all of the 27 members of the European Union (prior to the accession of Croatia in 2013), plus Norway, Iceland, and Switzerland. The party affiliation of a governor can be understood as a proxy for their political ideology.

Figure 1: Affiliation of central bank governors in relation to the government responsible for their appointment

Note: Figure in brackets indicates the number of appointments made by each type of government.

But the story does not stop here. Once we have established the partisan background of central bank governors, we can then track how their ideological congruence (or incongruence) with government impacts on their survival in office. To be sure, there are many other factors that may influence the tenure of a governor. These include the performance of the economy, the governor’s age, term limits, the formal independence of the central bank, and the overall political and economic stability of a particular country. But even when we try to account for these factors, a strong effect of the governor’s partisan congruence with the sitting government remains.

Figure 2 below plots the probability of survival in office over time after accounting for all the factors listed above. The figure in the vertical axis indicates the probability of a governor remaining in office (a value of 1.0 indicating they will have a 100 per cent chance of staying in office, while a value of 0 indicates they have a 0 per cent chance of remaining in their position). The horizontal axis shows the number of days in which a central bank governor has been in office.

Figure 2: Probability of a central bank governor remaining in office by affiliation with government/opposition 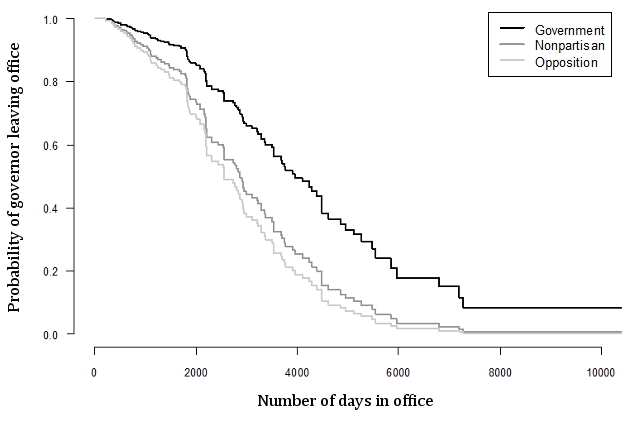 Therefore, while central banks are formally removed from the political sphere, ideology and partisanship seem to play a major role in determining the fate of central bank governors. And this also has real-world consequences. As recent research shows, party-affiliated governors seem to be more ‘dovish’ than their nonpartisan colleagues and more concerned with economic growth than with price stability (low inflation).

The UK’s “audit” of EU law is a waste of time. The EU is simply too complex to divide up into costs and benefits.

The Cyprus fiasco has all the hallmarks of a classic ‘whodunnit’