Greece and Albania would both benefit substantially from closer relations

Albania held elections in June, with Edi Rama winning enough support to become the country’s new Prime Minister. Alexandros Nafpliotis writes on Albania’s relationship with Greece, and the potential for the new government to create closer ties between the two countries. He notes that despite existing tensions, both countries would benefit greatly from a closer relationship, particularly in light of Greece’s upcoming Presidency of the Council of the European Union.

Exactly 42 years ago, the Croatian daily Vjesnik used the term ‘impressive’ to report to its readers the re-establishment of Greek-Albanian relations, adding that 1971 marked the year of a Greek ‘diplomatic offensive’ in the Balkans. The catalyst for this dramatic decision was financial, with both the Greek Colonels’ dictatorship and Albania’s Stalinist leader Enver Hoxha being interested in cultivating closer relations with each other in their effort to tackle their financial woes. At the time, Greek newspapers focused on the ‘open door’ policy followed by Hoxha, underlining the Albanian youth’s desire for contact with foreigners.

This September, a large part of Albania’s youth will be hoping for the realisation of some high expectations as far as the international relations of the country go. In an election which opens the way for Albania to become an official candidate to join the European Union, Edi Rama managed to push out of the limelight his formidable opponent, Sali Berisha, who had dominated politics in the small Balkan country since the collapse of communist rule – and who, incidentally, accused Rama of making (former Greek socialist PM, Georgios) ‘Papandreu-like promises’ of giving hand-outs.

Rama’s recent rhetoric has created the expectation that he will leave the mentality of the Hoxha era behind, and will concentrate on enhancing the functioning of democratic institutions to boost the country’s European course. A significant part of the herculean task which awaits Rama is managing relations with Albania’s neighbours, and, more specifically, with Greece – where one of the greatest concentrations of Albanian diaspora can be found (despite the fact that the crisis there has already made some of them go back to their home country and despite Rama’s recent promise to make his country less reliant on remittances from abroad).

Relations between Tirana and Athens have not traditionally been rosy. Problems in bilateral relations, like, for example, the Cham issue on the one hand, and the subjects of religious freedom and of the Greek minority in Albania on the other, have always put barriers on the road to a complete reconciliation, and have eroded the basis for friendly rapports and close cooperation. Recent divergences of opinion on issues such as the future of Kosovo and developments like the emergence, or increased currency rather, of the idea of ‘Greater Albania’, have shown that some Greeks see the increase of Albanian influence in the region as a threat. They have also accentuated the fact that a re-evaluation of the relationship between the two countries, within the context of an organisation with the prestige and institutional structure of the EU, is more than necessary. 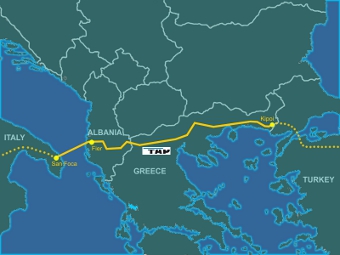 Up until recently the auspices were good: trade between the two countries was flourishing, the Head of Unit for Albania in the Directorate General for Enlargement at the European Commission is a Greek, and Greece itself is getting ready to assume the six-month rotating Presidency of the EU Council in January. This is not to mention the benefits expected from the two countries’ cooperation in the context of the Trans Adriatic Pipeline (TAP), which will transport natural gas from Azerbaijan to Southern Italy and Western Europe.

Moreover, in early August it emerged that the new Greek Foreign Minister (and leader of the Greek socialist party PASOK) Evangelos Venizelos is planning an autumn visit to Albania, to cultivate better relations with Rama, as the latter played a key role in nixing a 2009 agreement between Greece and Albania for the creation of an exclusive economic zone, allowing gas and oil exploration to progress. Later that month, however, tensions started running high as private security guards employed by municipal authorities in Permët in the south of Albania, forcibly evacuated a Greek Orthodox Church which had previously been abusively confiscated by Albania’s communist regime in 1968. On the same day, the Greek consulate in Tirana was targeted by anonymous attackers, prompting Venizelos to demand that the Albanian government “immediately arrest” those responsible.

The Greek press reacted immediately, publishing articles which called Albania a ‘satellite of Ankara’. The coverage castigated the deleterious influence of Turkish PM Recep Tayyip Erdogan on Rama, while also suggesting that it was the former mayor of Tirana who insisted on not authorising the creation of Greek cemeteries in southern and eastern Albania to commemorate Greek soldiers who died there fighting Italian forces. Tirana dailies responded by accusing the Greeks of ‘retaliation’ against Albania because Athens did not include EU enlargement on its priority list for its EU Presidency.

The Greek government is following events in its neighbouring country closely. The government insists on protecting the Greek minority in Albania and, at the same time, supports Tirana’s path to EU accession. However, Athens has, in the recent past, stopped short of taking a bolder initiative, mainly because of the limitations imposed on it by the financial crisis, but also because of the lack of a forward thinking foreign policy. The fact of the matter is, nevertheless, that Greece can only benefit from a warming of relations with Albania, primarily for two reasons. First, Athens’ desire to push forward with the delimitation of maritime borders and its subsequent exploitation of energy resources and, second, the increasingly crucial role ethnic Albanians play in the Balkans at large, and especially in Kosovo and (more importantly for Greece, due to the naming dispute) FYROM (see also recent statement by the leader of the largest Albanian political party in that country).

A new rapprochement, however, will pay dividends not only for Greece; it will also help Tirana in a considerable way. An amelioration of relations between the two countries will prove to the EU that Albania is relinquishing its irredentist past and will defuse growing nationalistic tensions within the country, thus bringing it closer to the coveted prize of EU candidate country status. Rama himself seems to have already realised that, for, in the new government’s programme, the consolidation of relations with neighbouring members of the EU and NATO is considered a priority. To emphasise this point even more, it was only a few days after his investiture that the Albanian PM called Greece ‘a strategic partner of Albania’ that can promote Tirana’s process of integration into the European Union. Again, as in 1971, the emphasis is put on the financial side of relations, and more specifically, on energy diplomacy (read TAP).

This proves that the benefits of closer relations are obvious for both countries, and what needs to be done is to strengthen the relationship, by ignoring nationalistic voices on both sides of the border, investing in mutual respect and working towards mutually beneficial initiatives. The change in leadership in Albania and Greece’s forthcoming EU Presidency present an opportunity not to be missed.

Alexandros Nafpliotis – Hellenic Foundation for European and Foreign Policy (ELIAMEP)
Alexandros Nafpliotis is a Research Associate at the Hellenic Foundation for European & Foreign Policy’s South-East Europe Programme. He has a PhD in International History from LSE and was recently a Visiting Fellow at LSE’s Hellenic Observatory and an Attaché at the High Commission of the Republic of Cyprus in London. He is the author of a chapter on Greek-Albanian relations, published in Greece in the Balkans: Memory, Conflict and Exchange (Cambridge Scholars Publishing, 2009), and Britain and the Greek Colonels: Accommodating the Junta in the Cold War (I.B. Tauris, 2012).