The Czech Republic will hold parliamentary elections on 25-26 October. Seán Hanley previews the elections, noting that a number of newly formed parties have the potential to enter the Czech parliament. These include a variety of niche and personal parties, including the anti-corruption movement ANO2011 led by Andrej Babiš, the “Czech Berlusconi”. Depending on how many of these parties pass the electoral threshold, it could prove difficult for a stable coalition government to be formed.

Czech voters go to the polls in early parliamentary elections on 25-26 October. The elections follow the collapse, amid personal and political scandal, of the centre-right government of Petr Nečas in June, and the subsequent failure of President Zeman’s handpicked caretaker administration to win a vote of confidence.

At one level the election seems set to deliver a simple and straightforward verdict,: established opposition parties on the left will win, while governing right-wing parties will be heavily rejected by an electorate frustrated with austerity, stagnating living standards and sleaze. The main opposition Czech Social Democrats (ČSSD), most polls have suggested, will emerge as the clear winners with around 25-30 per cent of the vote, although the final polls published before voting have suggested that the party’s support was starting to slide. Meanwhile the hardline Communist Party of Bohemia and Moravia (KSČM) is likely to pull in 15-20 per cent.

The polls also point to a defeat of historic proportions for the right-wing parties of the former coalition. The Civic Democrats (ODS) (formerly led by Nečas) have proved surprisingly deft in trying to pull back from the brink: the party picked Miroslava Němcová, one of its few leaders untainted by corruption – and the first woman to head a major Czech party – as the party’s new public face and have run an inventive (and occasionally witty) Twitter-led election campaign. But voters have remained largely unimpressed and the ODS seems set to see the 20 per cent support it received in the 2010 elections – then its worst ever performance – halved, relegating it to minor party status. Some polls put the ODS as low as 6.5 per cent, close to the 5 per cent threshold for parliamentary representation. The Chart below gives an indication of the latest polling. 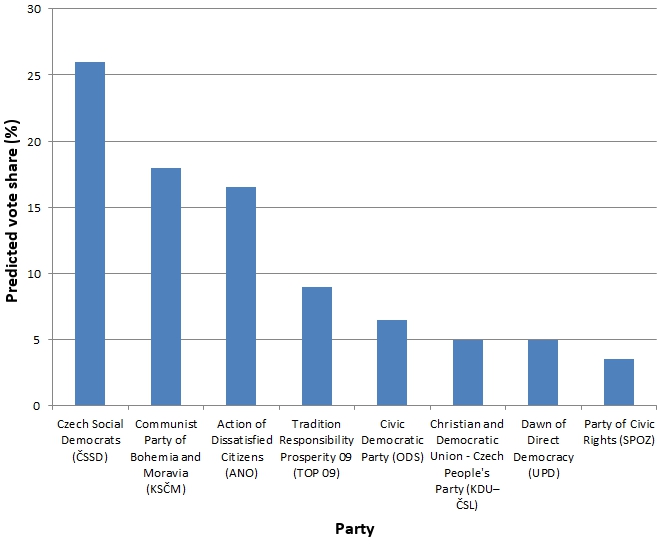 Note: Data taken from the CVVM poll on 21 October. Chart is for illustrative purposes and does not represent a personal prediction by the author.

ODS’s main centre-right rival TOP09 has, however, failed to capitalise on the troubles of its former coalition partner. Instead, it has waged a pedestrian election campaign and has no prospect of repeating its success in this year’s presidential election, when TOP09 leader Karel Schwarzenberg united a broad swathe of liberal and centre-right voters against the left-wing challenge of Miloš Zeman. Most polls suggest the party will struggle to match the 16 per cent it polled in 2010

Many voters have turned to new parties and extra-parliamentary groupings. Niche parties such as the Greens and Christian Democrats (KDU-ČSL), ‘personal parties’ such as the Civic Rights Party (SPOZ) of President Zeman or the Eurosceptic nationalist ‘Heads Up’ bloc endorsed by Václav Klaus have picked up sufficient support to put them within shouting distance of the five per cent hurdle. So too has the populist Dawn of Direct Democracy movement of a businessman-turned-politician Tomio Okamura. Okamura, who first came to prominence as a judge on the Czech TV’s version of Dragon’s Den in 2010, has gained profile through his fierce attacks against the political class, socially populist rhetoric and baiting of the Roma minority using his unusual Czecho-Japanese background to deny accusations of racism

A Czech Berlusconi in the making?

The most telling impact, however, has been made by ANO2011 the anti-corruption movement led by the Slovak-born billionaire Andrej Babiš, which has moved in a few weeks from relative obscurity to opinion ratings comfortably in excess of 10 per cent and is now regularly outpolling ODS and TOP09. The movement, whose name loosely translates as A Discontented Citizens’ Action – and spells out the Czech word ‘yes’ (ano) in acronym – may, some polls suggest, have sufficient momentum to push it into second place or even hold the balance of power.

The son of a Communist foreign trade official, who had lived for a period in Switzerland in his youth, the 59 year-old Slovak-born Babiš is an unlikely outsider. After a career working for state-owned petro-chemical trading companies under communism (including a stint in Morocco), he built up the Agrofert food and chemicals conglomerate, becoming a fixture in the country’s post-communist business elite. With a net worth of some $2 billion, he is now the second wealthiest individual in the Czech Republic.

Babiš entered the political arena in September 2011 when he spoke out against levels of corruption and called for civic mobilisation against the political establishment. When no such movement materialised and attempts to link his nascent movement with regional independents faltered, he embarked on a process of top-down party-building. The result has been a solidly organised, well-funded and professional campaign which has been effective at getting across Babiš‘s central message: that he is a practical businessman who can get things done and will run the Czech Republic like a successful business. While mainly appealing to a disgruntled right-wing electorate, his calls for reductions in VAT and compulsory property declarations for politicians have also chimed with some left-wing voters. Polling also suggests that Babiš’s political novelty is increasingly proving a draw for undecided voters urgently seeking some form of visible change.

The rise of a super-rich businessman turned anti-politician at the head of a movement, bearing all the organisational hallmarks of what Hopkin and Paolucci term the ‘business-firm’ model of party, has prompted inevitable concerns that Babiš is a ‘Czech Berlusconi’ in the making. Babiš himself has done nothing to dispel such fears by buying up the publisher of two of the Czech Republic’s main national newspapers and then telephoning their journalists to complain of their lack of coverage of his new party.

A party system in decay

Babiš may lack Berlusconi’s media clout and charisma, limiting the success of his movement – the (now defunct) anti-corruption party Public Affairs won similar levels of support in 2010 for a fraction of Babiš’s effort and outlay. But his rise underlines the increasingly fragmented and fragile state of Czech politics – as well as the growing difficulties of maintaining even a semblance of normal party government. Although they are certain to emerge as the largest party – and may have up to seven or eight parties sitting in parliament to choose from – the Social Democrats will struggle to find partners to form a stable, coherent governing coalition with.

While the Christian Democrats would be unproblematic, the opaque and faction-ridden pro-presidential party SPOZ would be an unpredictable ally, giving president Zeman unwelcome political leverage on the government. Andrej Babiš and ANO2011, while not beyond the pale, are still a more unknown quantity and have been ruled out by Social Democrat leaders as a right-wing vehicle for commercial interests. Co-operation with TOP09 – favoured by some centre-left modernisers – is politically unacceptable to most Social Democrats.

The one remaining government option may be to strike a deal with the Communists (KSČM). The Social Democrats are banned by a long-standing conference resolution from forming national-level coalitions with KSČM. However, a pact trading policy concessions (probably on domestic issues) for Communist parliamentary support for a minority Social Democrat government would be relatively straightforward to conclude. The two parties have worked smoothly together in regional government and, unlike most newly emerging groupings, the Communists are a predictable and well-structured party.

It is not without irony that the Czech Republic’s much reviled Communists may be the country’s best hope for stable, programmatically coherent party government – although the prospect of their regaining national influence will horrify many. But the real threat to Czech democracy arguably lies elsewhere.

Some of the last published opinion polls have suggested that the Social Democrats’ slide is such that even turning to Communist support would leave the party short of a working parliamentary majority. In this scenario, the party might have little choice but to contemplate co-operation with Andrej Babiš’s movement or even to entertain the previously unthinkable idea of a Grand Coalition with right-wing parties of the outgoing coalition.

If the parties of the Czech left cannot do any more than patch together yet another weak minority government, they too may find themselves enveloped by the same toxic mix of corruption, socio-economic frustration and anti-political protest voting that has already consumed the right. It seems that the Czech Republic is set for another ‘earthquake election’ which will reduce one of Central and Eastern Europe’s most consolidated party systems into a fractured political landscape of niche groupings, personal vehicles and business-driven ‘project parties’.

Seán Hanley will be discussing the results of the Czech elections at a Roundtable event at University College London on 28 October with Tim Haughton of the University of Birmingham, and Katya Kocourek of the Economist Intelligence Unit.