Luxembourg held snap elections on 20 October following the collapse of the previous government led by Jean-Claude Juncker and the Christian Social People’s Party (CSV). Martine Huberty assesses the results of the election and discusses the dramatic coalition negotiations which look set to leave the CSV frozen out of government, despite holding the largest share of seats in parliament. If an alternative coalition is formed between the Liberals, Social Democrats and Greens, it would mean the end of Juncker’s 18 year reign as Prime Minister, and constitute only the second time in Luxembourg’s post-war history that the CSV has not been in power.

Usually, Luxembourg holds national and European elections simultaneously, but because the social democratic Luxembourg Socialist Workers’ Party (LSAP) had lost its confidence in its coalition partner the Christian Social People’s Party (CSV) due to serious failings in the management and accountability of the secret service, snap elections were held on 20 October. Voting is obligatory in Luxembourg, though fines are rarely, if ever imposed. As Table 1 shows, electoral turnout was significantly higher than in 2009 (up 6 per cent), and the number of blank or invalid votes was almost constant, which may indicate that these elections were more salient than the previous ones.

Luxembourg’s parliament is composed of 60 MPs and is elected in four constituencies of various sizes. Voters have the choice of electing a party or picking individual candidates from different parties. Tables 2 and 3 show the share of the vote each party received, and the distribution of seats in the parliament. 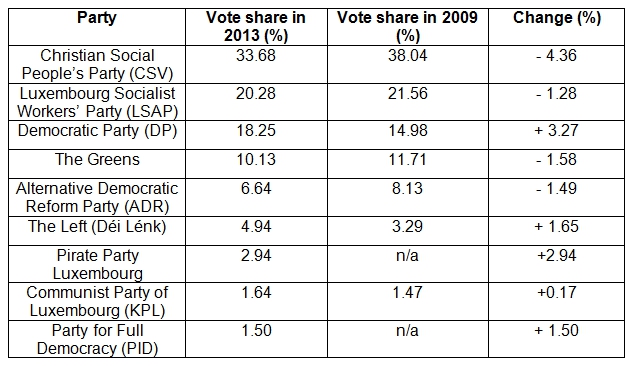 Table 3: Distribution of seats by constituency in 2013 Luxembourg elections 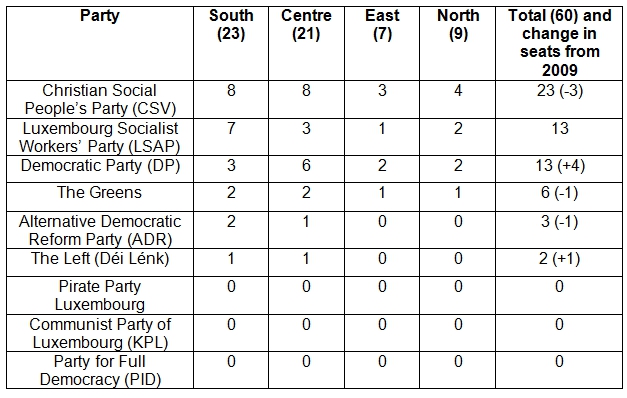 While the CSV lost 3 seats, it is still by far the strongest political force with 23 seats overall. Their former coalition partner, the LSAP, managed to hold on to its 13 seats, while the liberal DP gained 4 seats to raise their total to 13. The Greens and the conservative ADR lost one seat each, while the left party “Déi Lénk” won 2 seats. Two new parties joined the election campaign: the Pirate Party and the Party for Integral Democracy (PID), a splinter group created by former ADR member Jean Colombera, which received negligible support. However, the Pirate Party’s predominantly young members nevertheless achieved almost 3 per cent, which exceeded their expectations.

The picture that emerges is that the party system in Luxembourg may become more fragmented, as the CSV is losing its appeal with the swing voters, and protest votes have increased in favour of the smaller new parties, which collected a combined 11 per cent of the votes. A loss of over 4 per cent from their previous record result means that the claims by the CSV to have “won” the elections have been slightly discredited, and have added to the calls for a change in government. Furthermore, it has been argued that the CSV had not managed to renew itself in terms of its candidates: both the DP and the LSAP had put new, fresh faces into the campaign.

However, looking at the changes in overall percentages of vote shares since 1999, it can be noted that a so-called ‘Gambia coalition’ (the DP, LSAP and Green colours of blue, red and green have prompted a comparison with the Gambian flag) would already have been possible in 1999 when the CSV earned its lowest score. 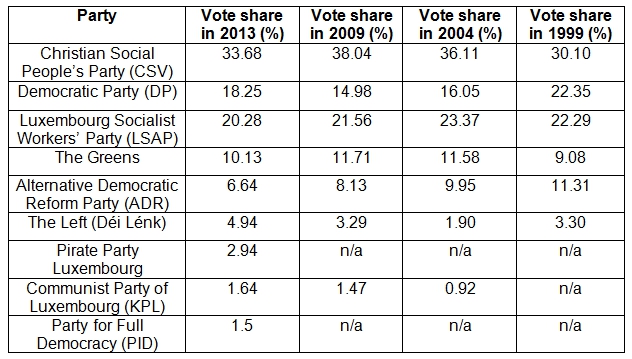 So what has been the trigger for the political upheaval in Luxembourg? It seems that the three parties (DP, LSAP and Greens) are united in their will to push the CSV, and Juncker in particular, into opposition. All three parties had called on Juncker in July 2013 to assume political responsibility for the SREL scandal, which had eventually led to his resignation. It was remarkable that the scandal had barely led to debates during the election campaign, but it seems that the issue was just being ignored, and not forgotten. They all see themselves as progressive parties and have many points in common, especially on social policies such as gay rights, and the separation between church and the state.

While many questions have been raised as to the compatibility of their election programmes, notably on employment and fiscal policies, it is likely that this overriding determination to send Juncker into opposition will induce compromises from all parties to form a coalition agreement as soon as possible. This is a truly extraordinary event in Luxembourg: it would only be the second time since 1945 that the CSV will not be in government (the first time was a coalition between the DP and the LSAP between 1974 and 1979).

The questions that arise now relate to the distribution of the ministerial posts- Xavier Bettel is likely to become the next Prime Minister, but so far no other posts can be safely attributed to the others. Furthermore, this is likely to have ramifications at the EU level as well, as Viviane Reding, Vice President of the European Commission, will probably be replaced by someone senior from one of the three parties in 2014. For a country known for its political stability and experienced, long time serving politicians, these elections can truly be described as a sea change.