A common criticism of EU climate policy is that it makes conditions more expensive for European businesses, which may encourage companies to relocate to other parts of the world. Andrzej Ancygier writes that much of this criticism is overstated. He argues that providing concrete long-term climate goals would provide more security for businesses, and that EU climate policy can also boast some notable successes, such as general improvements in energy efficiency relative to other countries like the United States.

The spectre of deindustrialisation is looming across Europe. Increasingly, European politicians have argued that European energy and climate policy decreases the competitiveness of European enterprises and makes industry leave the EU. The Polish Minister of Economy, Janusz Piechocinski, for instance, has argued that “the European economy cannot be based exclusively on the service sector”. EU Commissioner for Energy, Günther Oettinger, has claimed that the process of de-industrialisation in Europe has already begun.

For his part, Jürgen Kerkhoof, president of the German Steel Association, has complained that in Germany electricity prices are higher than in most other countries. According to this line of argument, it is the European energy and climate policy that is to blame. Such statements are often strengthened by quoting the example of the chemical company BASF, which decided to move some of its activities to the United States to take advantage of cheap energy prices, especially for natural gas.

It’s all about predictability…

For a number of reasons, these statements and examples are simplifications which do not reflect the situation of European industry. A case in points is BASF’s decision to invest in the United States, which has been presented as the beginning of a long process of industry moving to the other side of the Atlantic because of European climate and energy policy. But the main factor behind BASF’s decision was the significant decrease in the gas price in the Unites States resulting from the extraction of shale gas. Therefore it cannot be argued that cheaper energy prices in the US are mostly the result of European energy and climate strategy – with the CO2 prices below €5 and free emissions allowances for energy intensive industries, the impact of the EU Emission Trading Scheme (EU ETS) is negligible.

What is much more important is the lack of predictability concerning the EU ETS, and insecurity with regard to its development after 2020. This makes industry’s investment in energy efficiency, and research and development into new low-carbon technologies, a gamble: if the EU fails to introduce more ambitious long-term climate policies, companies that invested in new and initially more expensive technologies would be much worse off than the enterprises that continued to operate at lower efficiency.

Therefore the lack of long-term climate policy discourages companies from investing in energy efficiency and low-carbon technology, with some of them potentially deciding to leave the EU altogether. This leads to the conclusion that if an industry is leaving the EU, it is not doing so because of the already agreed measures, such as the Energy and Climate Package from 2008, but rather because of the inability of EU leaders to indicate the direction in which European climate policy is heading.

Deindustrialisation, understood as a decrease in the role of industry in creating GDP, is indeed taking place in the European Union. However, as shown in Chart 1 below, this is a process which began decades before there was any talk of climate policy, and it affects all industrialised countries. With the reduction of custom duties, and a significant decrease in transport costs, industry has increasingly relocated to countries with lower taxes and labour costs. That was the major factor which led to the creation of the Asian tigers in the 1980s and the 1990s, and contributed to China becoming the second largest economy in the 2000s.

But at that time there was no talk about limiting wages in Europe to the level of its Asian competitors, or depriving European employees of health insurance, which was also not universal, to lower production costs. Instead European industry was encouraged – more or less successfully – to invest in research and development, and energy efficiency. Why should we do it differently now and give up on a policy aimed at the wellbeing of future generations?

Chart 1: Share of added value of industry in creating GDP in the United States and four EU countries 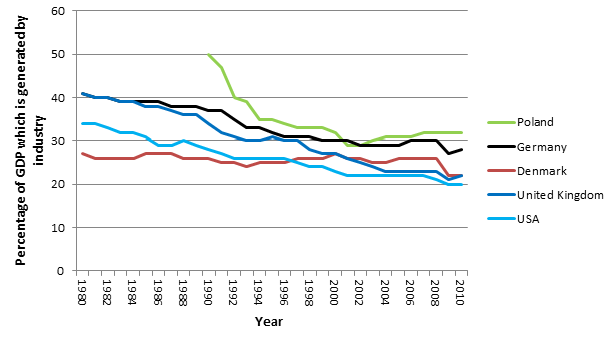 Another misconception concerning European climate policy is the perception that its main tool, the European Emissions Trading Scheme, constitutes a significant cost to the European economy. Indeed, the need to purchase emissions allowances is a burden to some sectors of industry: the less efficient a company is in comparison to its competitors, the higher the costs resulting from the EU ETS are. But the money is not wasted or sent abroad: it ends up in the budgets of member states and could be used to lower the taxes for companies threatened by carbon leakage, which is explicitly allowed in directive 2009/29/EC. It can also be used to invest in research and development that could make European industry the most competitive in the world.

Indeed, as Chart 2 indicates, European industry is already much more effective in comparison to its American equivalent. According to the US Energy Information Agency, despite a larger share of industry as a percentage of GDP, the Polish economy is 18 per cent less energy intensive than the American one. The German economy, also with a significant share of industry in national GDP, needs over a third less energy to generate an additional unit of GDP than the US economy. 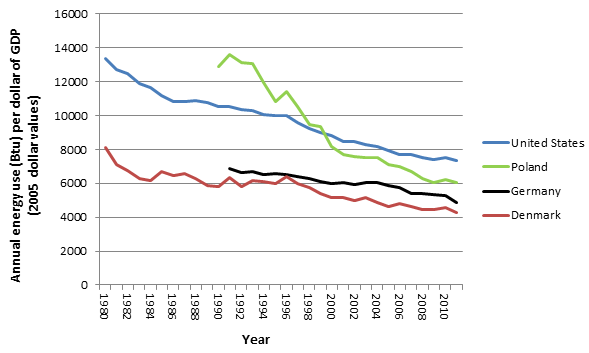 Note: The chart gives a measure of energy efficiency for each country. The vertical axis indicates the annual level of energy used (shown in Btu – a unit of energy equivalent to around 1,055 joules) per dollar of GDP (using 2005 dollar values).
Source: Author’s compilation based on U.S. Energy Information Administration

Overall, in the EU there are only two countries with higher energy intensities than the United States: Belgium and Malta. In addition, as some data shows, there is still huge potential for improvement, which can be seen in the example of some Eastern European economies. The energy intensity of the Polish steel industry is between 30 per cent and 50 per cent lower than that of some of its neighbours. Despite the statements of some Polish politicians to the contrary, Polish industry can be one of the winners of a more ambitious climate policy in the EU.

“Green industry” is also an industry

In their critique of European energy and climate policy, many politicians fail to realise that these policies have also led to the development of a new industry. Indeed, at a time when most sectors were making employees redundant, it was the development of renewable energies and (still lagging behind expectations and existing potential) investment in energy efficiency that led to job creation and economic development during the economic crisis in 2008/2009.

Since the adoption of the Renewable Energy Law in Germany over a decade ago, and the introduction of feed-in tariffs, the share of industry as a percentage of German GDP bucked the long-term downward trend and increased by 1.8 per cent. In addition, a significant part of the 380,000 jobs created in the renewable energy sector were generated in the service sector dealing with the maintenance and installation of the renewable energy units. In the case of Denmark, it is the sector of wind energy which is currently generating almost 3 per cent of its GDP, with the wind turbines produced by Danish Vestas installed across the world. Although in both countries, partly as a result of the support for renewable energy, the costs of energy for individual consumers increased, it is also leading to significant savings in the long-run: with the exception of biomass, in the case of renewable energy there are no generation costs which constitute a significant share of the electricity price.

The choice we are facing

European policy-makers have a choice to make: to follow or to lead. It can do away with the Emissions Trading Scheme, reduce taxes imposed on the energy sector, and allow the industry to pollute even more, only to keep it from moving to another country. It would certainly save some jobs – for now. But apart from the enormous costs such a policy would have for future generations in the form of climate change and depleted resources, it would also discourage companies from investing in new technologies and change European industry into the fossil of the global economy. At a time when there will be no other way but to turn towards low-carbon technology, the EU would be forced to import such technologies from other countries.

The other option for European decision-makers is to make the EU lead the change towards a more efficient and cleaner industry by introducing a long-term, predictable and ambitious climate policy. The argument that emissions from European industry play a negligible role in contributing to climate change ignores the possibilities resulting from such policies for European companies. With more and more countries taking action against climate change, among others China and the US, Europe would benefit from having the industry and the technology necessary for low-carbon development.

But an ambitious climate policy also has to take into account the reality on the ground. European industry cannot be forced to face competition by companies from countries without any measures to reduce their emissions of greenhouse gases. Therefore the reform of the Emissions Trading Scheme should also affect products imported to the EU: importers of such products, especially from energy intensive industries, should be treated equally with domestic producers and be included in the Emissions Trading Scheme.

European climate and energy policy is far from perfect. Its main instrument, the European Emissions Trading Scheme, is having a limited impact on some industries, and the unpredictability of the mechanism is hindering long-term investments in energy efficiency and low-carbon technologies. The inability of some countries to learn from each other’s experiences has made support for renewable energy more expensive than many had imagined just a decade ago. But the rather young policy can also boast some successes: the efficiency of European industry has increased, and a stable framework for the development of the renewable energy industry in some countries led to the creation of a new industry. This is a great basis to work on, provided there is enough political will to lead rather than to follow.

Without strong German leadership, the adoption of an ambitious renewable energy policy across Europe will be impossible.