The UK and Germany have both expressed a desire to reform the way the EU functions. Almut Möller and Tim Oliver argue that due to their contrasting constitutional traditions and outlooks, the two countries risk misunderstanding or antagonising one another. They point out that the German discussion around EU competences is part of a country-wide debate on federalism, while the UK’s proposition of a competences review is informed by the ideas of Parliamentary sovereignty and the repatriation of power.

In his January speech on Europe, David Cameron committed a future Conservative government to renegotiating the relationship between Britain and the EU. This new relationship would then be put to the British people in an ‘in-out’ referendum. Seeking allies in their efforts to change the EU, and thus keep Britain in, Cameron along with many others in the UK have set their sights on Germany and Chancellor Angela Merkel. 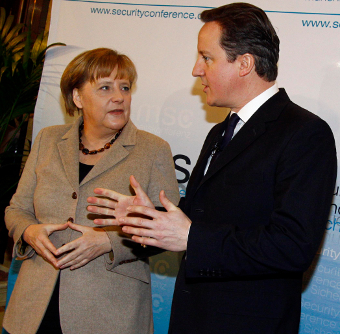 They hope that the need for reform in the Eurozone will open the way for a review of EU competences and repatriation of powers. These hopes have been heightened by occasional comments about the need for reforms in the EU from German politicians. However, Britain risks missing the point that German debates about EU competences are shaped by a political and constitutional outlook that is in sharp contrast to that of the UK.

First, German debates about Europe have always been framed in a way that reflects what Germany feels is good for Europe, not just Germany. Although the country is becoming more at ease with the notion of self-interest, British unilateralism and national self-interest sit uneasily with this approach. Second, the UK should not think it can use German debates on EU reforms for domestic purposes. Tactically speaking, it might be useful to point out to the UK public that London is not alone in its reform agenda. However, if taken too far this might be seen as London trying to manipulate Berlin, and could potentially annoy Germany. Finally, Britain’s efforts could tempt Germany to stress that the UK alone cannot lead this debate. The UK must connect its agenda to wider European and national debates about competences and needs to regain credibility from a continental perspective.

To understand this situation better, Britain and Germany should remind themselves of their contrasting constitutional histories and cultures. Germany’s thinking on EU competences is part of a domestic debate about federalism. The patchwork of kingdoms, dukedoms and principalities that made up Germany until 1871, still exist today in the form of sixteen Bundesländer (federal states). While the constitution might be clear about the distribution of power between the central government and the federal states, in reality, the demarcation of competences is not so clear-cut. Over the past ten years two major commissions have been convened on the reform of the German federal system, and it looks like a third one is on the way.

To this we must add memories of 1933-45 and the Western Allies’ subsequent insistence on strong regional government to constrain central government, as well as Germany’s later determination to see itself integrated into the EU. Germany’s views on what the EU should and should not do emerge from this historical background. The Bundesländer has been at the forefront of debates about competences in the EU and have managed to incorporate exclusive, shared, supporting, supplementing and coordinating competences into the EU’s legal order categories in the Lisbon Treaty, similar to those found in the German constitution.

In contrast, the UK’s debates about federalism and EU competences are not well-developed; they are often muddled, and almost entirely focused on the UK. British politics remains dominated by the idea of Parliamentary Sovereignty, with all power retained by Westminster. Devolution to Scotland, Wales and Northern Ireland, along with the recreation of a Greater London Assembly, might have started a process of turning the UK into a federal system. Yet, devolution implies powers can also be taken back or suspended, as they have been on occasion in Northern Ireland, when the peace process has faltered. The majority of the UK continues to be governed by one of the most centralised systems in Europe. For Westminster, powers and competences are not shared, they are either centralised or devolved. For Westminster, competences held by the EU are seen in a similar way as powers in devolved government: they are given, not shared, and can be taken back by Westminster.

So, it was no surprise that when the UK government announced it would conduct a ‘Balance of Competences Review’ to examine the role of the EU in British life and whether that balance needs to be redressed, Germany declined to participate. Berlin sensed the review was driven more by Westminster’s self-interest, than a desire to reform for the good of Europe. Cameron has since changed his approach and now talks of EU-wide subsidiarity and democracy, rather than unilateral repatriation. This moves some way towards ‘talking the talk’ of the Germans on the balance of competences, but Germany remains wary. After the difficult ratification of the last round of the Lisbon Treaty, there is little appetite for far-reaching reforms. Ironically, Germany has become more pragmatic with regard to treaty reform, while the British agenda is becoming more ambitious, and even ideological.

British misunderstanding of Germany’s approach surfaced again during the recent German federal elections. Angela Merkel mentioned the possibility that reforms to the Eurozone might lead to a review of the balance of EU competences and did not rule out the transfer of competences back to member states. However, Merkel was speaking in a federal election campaign and in a parallel election campaign in Bavaria, a region crucial for her party. Bavaria is noted for guarding against Berlin handing powers to Brussels. To German ears, Merkel’s comment was yet another contribution to the federalism debate. For British commentators, it was misinterpreted as a major concession to Cameron.

Finally, from Germany’s perspective, Westminster’s obsession with the EU might seem strange when the possibility of a UK break-up has become more real now than ever before. Instead of obsessing about EU competences, Westminster might like to pay more attention to rebalancing the competences within the UK and moving towards a more federal system. A federal United Kingdom and a federal Germany might then be able to better understand each other’s views on reform of the European Union.

Almut Möller – DGAP
Almut Möller has been head of the Alfred von Oppenheim Center for European Policy Studies at the German Council on Foreign Relations (DGAP) since 2010. She is a non-resident fellow at the American Institute for Contemporary German Studies (AICGS) and an associate fellow at the Austria Institute for European and Security Policy (AIES). A graduate of the Ludwig Maximilians University, Westfälische Wilhelms University and the Institut d’Études Politiques (Sciences-Po), she has also worked on the European Union Reform and Enlargement Program and the Euro-Mediterranean Program at Center for Applied Policy Research (CAP) at Ludwig-Maximilians-University in Munich.

Tim Oliver – Johns Hopkins University
Tim Oliver is a Fritz Thyssen TAPIR Fellow at the Center for Transatlantic Relations, Paul H. Nitze School of Advanced International Studies, Johns Hopkins University, Washington D.C. Until recently he was based at the Stiftung Wissenschaft und Politik (SWP), Berlin. A graduate of the University of Liverpool and the LSE, he has taught at LSE, UCL and spent several years as a Senior Lecturer in Defence and International Affairs at the Royal Military Academy Sandhurst. He has also worked in the European Parliament and the House of Lords.