What should the aim of Europe’s social democrats be? Francesc Trillas writes that the Eurozone crisis presents something of a paradox in the sense that social democratic parties in several European countries have struggled electorally, despite the crisis being closely associated with failures in the banking industry. He argues that the aim of social democrats should be reframed around promoting ‘sustainable progress’, with a wider strategy to tackle unemployment in a globalised context.

At a time of political and economic uncertainty, especially in Europe, it is useful to vindicate the political tradition that has provided more welfare to more people for a longer period of time: social democracy. Social democratic government experiences in northern and central European countries are the most successful ever, in terms of shared prosperity. According to the words of the late historian Tony Judt, social democracy is not only a list of government policies, but also a collection of values that are the best to navigate an uncertain globalised society. It is something of a paradox that social democratic organisations face electoral difficulties in many countries at a time when the alternatives (deregulated capitalism, communism) have failed so clearly the test of government.

The social democratic model of shared prosperity means high taxation with a generous universal welfare state, a clean government, environmentally sustainable growth, excellent public education, and willingness to introduce reforms when there are crises, while maintaining the essential aspects of the model. These characteristics are compatible with open markets and large privately owned firms. The countries that have remained faithful to this model are today among the most stable and prosperous in the world. They are not a paradise, nor are they free of problems, but any proposals on how to exit a crisis should start from this benchmark.

The aim of egalitarianism should not be limited only to a static measure of equality in income. It should incorporate concern over the inheritance of inequalities, lack of social mobility and the overly high correlation between the income of parents and the income of children. It should also focus on inequality in access to power, and in the access to discrete contractual positions (weak or strong, principal or agent) that are determined by an individual’s wealth.

This means that social democrats should not be seen as those that side with the powerful, but as those who give hope to the vulnerable. But this hope should be sustainable over time. It should, for example, avoid the “Dutch disease”, when there are sudden increases in the value of natural resources or other assets. It should also translate into programmatic policies that give rise to investment in long-term human and physical assets, and in innovations that lead to improvements in productivity.

Social democrats recognise the power of markets to yield efficiency and innovation in many cases. But they also recognise the limits of markets in many cases where individual decision-making does not internalise many effects on others, and where the outcomes are unfair from a social justice point of view. Collective action must then supplement markets in the solution to common problems, which are pervasive in the global economy, and in industries that are intensive in information (a collective good).

The state must be adapted to the real size of markets. Increasingly, labour markets, commodity markets, and capital markets are global, whereas state instruments remain national. There is a mismatch of sizes that must be fixed either by shrinking markets or by enlarging states. However, this raises the famous ‘Rodrik’s trilemma’ scenario, where democracy, market integration, and nation-states cannot co-exist.

In Europe, dispensing with nation-states in a rapid transition towards a federal Europe seems plausible and necessary. Social democracy should show a clear commitment in this direction, accompanying it with a clear option in favour of a European market and a European welfare state with European democratic politics. This new politics should also be able to communicate better with old and new voters, by conveying emotions and values of solidarity and fraternity. Of course, European politics should not be an excuse to avoid pursuing necessary policies at the national and local level, where inter-jurisdictional constraints are not binding. There are many opportunities for this in education, industrial and labour policies, among others.

Social democrats will not be seen as siding with those that have less power unless they demonstrate integrity in their efforts to promote democratic regeneration. More transparent, democratic and modern political parties, and more transparent electoral systems should be part of any platform to find a credible middle way between technocracy and populism. Democratic regeneration to fight populism and technocracy is not only good politics, but good economics. Creating new political instruments that are perceived as a collective good will encourage citizens to favour democracy, stability and programmatic politics.

Many of the efficiency and equity challenges that society faces, including climate change, global poverty, and financial instability, can only be solved with better state intervention. High taxation will be necessary to make the risk involved in integrated markets acceptable. As the Chart below shows, many European member states are still far below the level of tax revenues of the most advanced countries. Social democrats should try to shift the Laffer curve to the right, in the sense of making high tax rates economically sustainable. This can be achieved through cultural persuasion that facilitates tax compliance, inter-jurisdictional harmonisation, and reducing other distortions in the economy that increase the efficiency costs of taxation.

Chart: Tax revenues in EU countries as a percentage of GDP (2011) 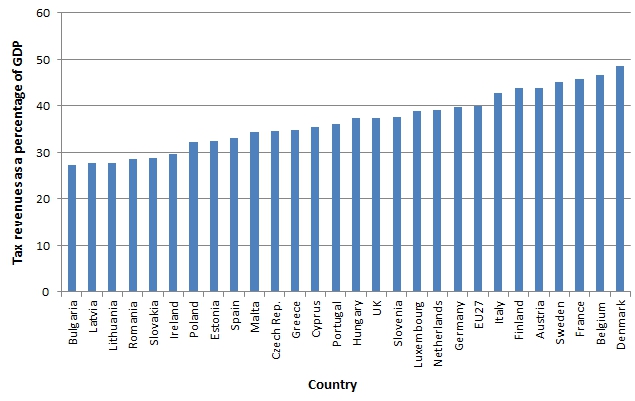 A more equitable and environmentally friendly economic growth model will be more sustainable than one based on a laissez-faire economy. However the focus should not be on sustainable growth per se, but on sustainable progress, for which growth is probably a necessary, but not sufficient condition. Progress should be sustainable from a political and environmental point of view. Policies should not be short-term recipes to win the next election, but medium to long run strategies that are verifiable and compatible with telling the truth to citizens when solid achievements are not affordable or must be postponed.

Sustainable progress will only be achieved with a global strategy to fight unemployment in a globalised context. This means that immigration policies should be internationally coordinated with medium to long term objectives in terms of flows and economic development of the origin countries. More flexible labour markets should be combined with institutions that provide security to workers and that allow for the participation of workers in the management and control of firms. As suggested by Colin Mayer, corporations should be aware of their social dimension and commit to objectives broader than profit maximisation. This will greatly contribute to endeavours such as the elimination of corruption, fighting climate change, or the improvement of public-private partnerships or public regulation.

An older population, combined with the effects of William Baumol’s so called ‘cost disease’ in the public sector, suggest the need for more resources for public objectives. More resources will only be found if productivity keeps increasing at significant levels. A third industrial revolution based on clean energies, with strong intervention from a renewed state, can make this possible. In time, universal, not necessarily free, welfare states, combined with a minimum income guarantee, can be generalised. This should be the horizon of a social democracy, committed to sustainable progress.