Several countries across Europe have experienced persistent problems with unemployment since the start of the financial crisis. Alexandre Afonso writes that southern European countries are faced with a choice between adopting either Anglo-Saxon style market liberalisation or Nordic style welfare spending as part of their response to the problem. Seeing neither as a feasible option, he proposes an alternative strategy – a ‘third way’ based on enabling part-time work, offering greater vocational training, and increasing labour market participation among key groups.

Mass unemployment is probably one of the most worrying features of the Eurozone crisis. As youth unemployment is hitting record levels (one in four people under 25 in Europe and more than one in two in Spain are officially out of work), many observers are warning of the prospect of a “lost generation”, especially in southern Europe. The European Central Bank and the international financial institutions may have developed an obsession for deficit and debt reduction, but mass unemployment can be considered a much more worrying problem in the long term for both workers and governments.

For workers, their skills deteriorate when they are out of work and, as technology moves forward, their likelihood of finding a job tends to decrease with the duration of unemployment. For governments, each period of mass unemployment tends to increase the incompressible threshold of structural unemployment. When the numbers of unemployed increase en masse, it is very difficult to come back to the initial level, even in the case of an economic upturn. Many workers driven out of work for too long are never able to come back into employment. The problem is even more serious when unemployment primarily concerns young people at the beginning of their career, who cannot even start climbing the employment ladder in the first place.

In this context, what can governments do, and how do different types of reform impact public deficits and inequality? In the late 1990s, political economists argued that service-based economies, where economic and productivity growth tend to be much lower than in the past, entail a “trilemma” between high employment, low inequality and budgetary restraint. Following this idea, governments in service economies have to choose two out of these three objectives, as all three of them cannot be reconciled.

For many Continental European countries with the so-called “Bismarckian” welfare state, such as France, Germany, Italy or Spain, the common wisdom is that employment has often been sacrificed to reduce inequality and – often unsuccessfully – contain taxation at the same time. Redistribution is funded through payroll contributions levied on wages rather than by general taxes, which tends to price out low-skilled workers. The amount of contributions employers have to pay even on low salaries can make them too expensive, and earnings-related benefits and minimum wages possibly prevent the entry of low-skilled workers.

In Mediterranean countries, like Spain, Italy, Greece or Portugal, the problem which is often emphasised is the rigidity of labour laws, which tend to protect the “insiders” – people who have entered the labour market in the period of growth between the 1960s and 1990s, making it harder for new entrants to get in. The result is that young people are much more affected by unemployment, in spite of the fact that they are typically much more qualified than their parents. 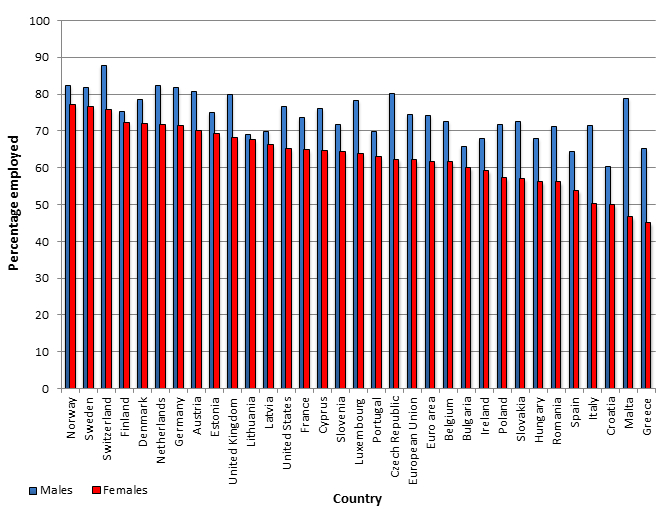 The first strategy governments can pursue to increase employment while keeping a lid on public expenditure is the Anglo-Saxon way – namely, mass deregulation to price in workers again at the bottom of the labour market. It is also the one that is being pushed by European institutions, Germany and the current Spanish government. This involves cutting down payroll contributions and benefits in an attempt to see the expansion of the labour market downwards, through low-wage jobs. It is understandable that Germany is pushing for this kind of solution because it is the strategy that it itself has pursued since the early 2000s, with the rise of mini-jobs, the Hartz reforms and a deliberate strategy of wage compression by German trade unions.

The obvious direct consequences of this strategy are the higher income inequalities typical of Anglo-Saxon economies. Income inequalities in Germany also seem to have increased considerably in recent years in spite of the “jobs miracle”. It is unclear, however, whether deregulation can really increase employment across a wider set of countries. Moreover, the internal devaluation strategy pursued by Germany to boost exports and run a positive trade balance can only work if other countries run a trade deficit: we cannot all be Germans at the same time.

The second strategy is the Scandinavian way. It consists of the massive expansion of the public sector to provide a wide variety of social services funded by high levels of taxes. Countries like Denmark, Norway or Sweden tend to have higher employment levels at least in part because the state provides or subsidises a large variety of high-quality social services such as childcare, which not only employ a large workforce, but also tend to facilitate female employment. Affordable childcare allows both members of a household to be employed, while its absence often forces a member of southern European households – typically the woman – to choose to stay at home.

Moreover, these countries invest massively in active labour market policies. Obviously, the price to pay for this strategy is very high levels of taxation to fund the state, or alternatively, an increase in borrowing. In the context of fiscal austerity that pervades almost all European countries, this is politically very difficult, or even impossible. Countries like France, however, still have large programmes of publicly subsidised employment for young people. In 2013, a quarter of jobs held by people below 25 were partly subsidised by the state.

If deregulation creates inequality and is not guaranteed to work, while public sector expansion is very expensive, what is left? In a forthcoming book chapter, Jelle Visser and I argue that there may be a third “liberal-corporatist” way, based on the experience of countries such as Switzerland and the Netherlands, where employment participation is high, inequality is low to moderate, and the public sector is nowhere near the size of Scandinavian countries.

This model relies on the widespread use of part-time employment and strong systems of occupational skills, lifting wages in the bottom of the labour market. The Netherlands and Switzerland have the highest incidence of part-time employment in the OECD, and Switzerland has one of the lowest income inequality levels in the OECD, in spite of the fact that it redistributes as little as the United States. In a context where public sector expansion and extensive Scandinavian style subsidised childcare are politically difficult to put in place, the increase of part-time employment has been a private response allowing women in particular to reconcile childcare with labour market participation.

Interestingly, the places where the Dutch and Swiss social models perform particularly well are those in which southern European countries are lacking – notably for female, elderly, and youth employment. The latter is largely due to strong systems of vocational training which ensure a better transition from school to work, so that the alternative is not simply between dropping out of school with low skills or going to university – a system which also tends to foster income inequalities. In all these respects, they can represent a politically viable way to escape the trilemma outlined above, at a lower cost in terms of public finances and inequality. 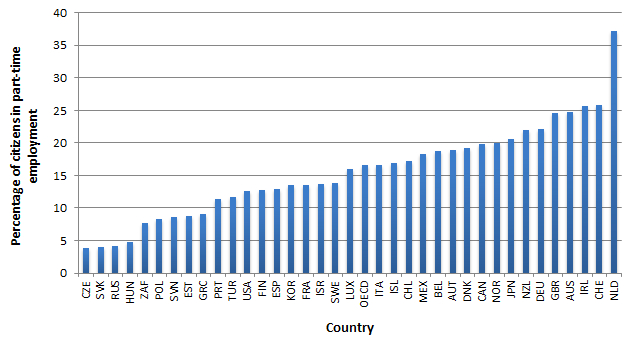 Of course, any supply-side reform agenda is constrained by the availability of demand, which is a massive problem in southern Europe. Governments are cutting spending at a time when households are reducing their consumption. Supply-side reforms can have little effect if nobody at home or abroad is buying anything. In Switzerland and the Netherlands as well, high employment has been underpinned by some form of demand-stimulating factor whose sustainability is uncertain. In the Netherlands, tax exemptions on mortgages have encouraged ever-inflating house prices and the highest levels of mortgage debt in Europe. At the moment, the country is in recession, and the government has cut spending at a time when households are seeking to reduce their debt level.

In short, while the Dutch government has been a harsh advocate of austerity in southern Europe, it finds itself trapped in the same kind of “balance-sheet recession” that Spain is facing. In Switzerland, domestic demand has been maintained by very high levels of immigration since the mid-2000s, compensating for declining exports due to the appreciation of the Swiss franc (as a consequence of the depreciation of the euro) and anaemic demand in the Eurozone. The sustainability of this strategy can be questioned as well, as population growth cannot be pursued indefinitely.

Alexandre Afonso –King’s College London
Alexandre Afonso is a Lecturer in the Department of Political Economy at King’s College London. His research interests are comparative politics, labour mobility, industrial relations and welfare state reforms. His book Social Concertation in Times of Austerity was published by Amsterdam University Press in 2013. He tweets @alexandreafonso

Spain is experiencing a period of intense social crisis.