To mark Christmas Eve, the EUROPP editorial team decided to bring you an alternative piece of research. Based on a recent YouGov poll on attitudes toward Christmas, EUROPP editors Eri Bertsou and Stuart Brown assess which demographic groups most look forward to the holiday. Despite the wide variation in attitudes among UK citizens, they note that people across Europe are still largely positive about Christmas, with only those in France indicating that they don’t look forward to the festivities.

Difficult as it may be to believe, not everyone is looking forward to Christmas this year. In a recent YouGov poll of people in the UK, 21 per cent of respondents indicated that they ‘disliked’ Christmas, while 16 per cent replied that they would cancel the holiday altogether. Although a majority of Brits nevertheless stated they were excited about the run up to Christmas, this might represent a potentially worrying trend. Are we witnessing the rise of Christmas-scepticism?

The figures make more interesting reading when broken down. As Chart 1 shows, there was a clear gender split in responses. Male respondents were far less likely to look forward to Christmas than female respondents, with 26 per cent of men indicating they disliked the holiday, compared with only 17 per cent of women. The reasons for this are unclear, but British men are undoubtedly far more likely to be ‘Scrooges’ than their female counterparts.

Chart 1: Attitudes toward Christmas by gender in the UK 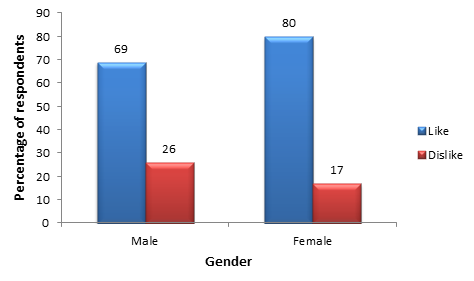 As Chart 2 shows, younger members of the population were also more likely to view Christmas favourably – which may or may not have something to do with them tending to get better presents! Indeed for every increase in the age range, the percentage of respondents indicating they dislike Christmas also increases. The over-60s are particularly sceptical, with well over a quarter (27 per cent) stating that they dislike the holiday.  As the survey only sampled adults, it is reasonable to assume that enthusiasm and eager anticipation are still the main feelings for children around the country.

Chart 2: Attitudes toward Christmas by age group in the UK 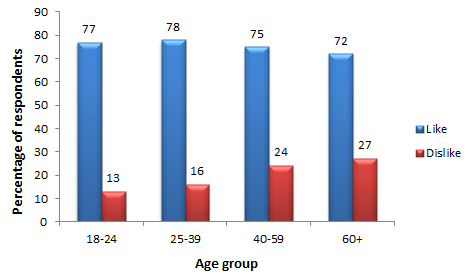 Perhaps most interesting of all, the survey also includes a breakdown by party preference. Conservative supporters were more in favour of Christmas than those intending to vote for the other major parties, although there was only a 3 per cent difference in support in comparison to Labour voters. UKIP supporters on the other hand appear to have the least festive cheer, with 32 per cent indicating they disliked the holiday, and 21 per cent expressing support for cancelling it altogether.

Chart 3: Attitudes toward Christmas by voting intention in the UK 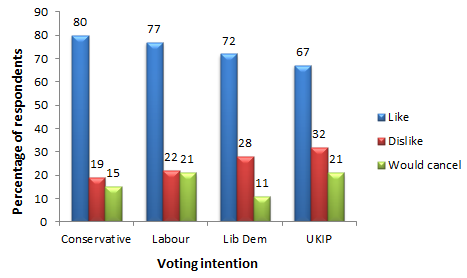 Across Europe, however, the British responses were fairly positive overall. Of the seven European countries included in the survey, Norwegians were the most positive, closely followed by Danes. France was the only country in which a majority of people were not looking forward to the holiday, with only a quarter of those asked expressing excitement about Christmas. This may be partly explained by 20 per cent of French respondents indicating that they felt lonely during the festive period, which was higher than in any of the other countries surveyed.

For most people, then, Christmas is still a positive occasion. Whatever you’re doing this year, we wish you all a happy holiday and a great new year!

Eri Bertsou – LSE
Eri Bertsou is a PhD Candidate in the Department of Government at the LSE conducting research in political behaviour in Europe. She holds a BA in Philosophy and Literature from the University of Warwick, an MSc in Political Communication from the London School of Economics and has worked in financial markets before embarking on her doctoral thesis. She speaks English, Greek, French and Italian.

Stuart Brown – LSE Public Policy Group
Stuart Brown is the Managing Editor of EUROPP. He joined the Public Policy Group in July 2012 to carry out review work for the European Court of Auditors. Before joining the LSE PPG he completed his PhD at the University of Strathclyde, Glasgow, on European executive agencies and delegation within the EU’s institutional framework. His research interests include economic integration, regulatory processes and EU decision-making. 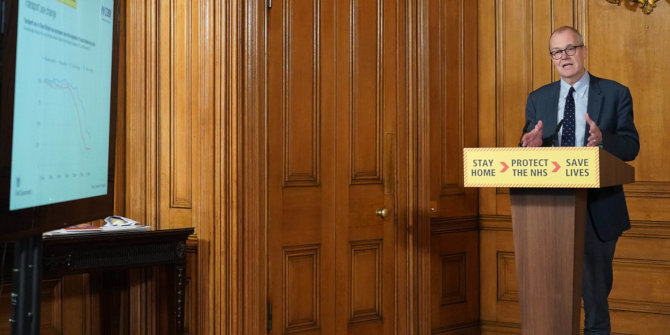