Decentralisation has been one of the principal forces driving constitutional change in European democracies over the past few decades. Using data covering 284 parties in 31 separate countries, Simon Toubeau and Markus Wagner assess the link between policies on decentralisation, and parties’ ideology on economic and cultural matters. They illustrate that parties form their stance on decentralisation with close reference to their economic and cultural value positions. This effect is influenced, however, by factors such as the degree of self-rule afforded to regions, the existence of regional economic disparities, and the ideological distance of regionalist parties at the national level.

In Europe, we are aware of how the EU has transformed the nation state, but in many countries another source of transformation has been equally powerful: the process of decentralisation. This process has gathered pace in recent years. In November 2011, Belgium reformed its constitution for the sixth time to accommodate the demands of assertive Flemish nationalist parties. In the UK, the recommendations of the Calman Commission found their way into the Scotland Act 2012, which provides the Scottish Government with greater tax-varying powers. In countries such as Germany, Italy and Austria, long-standing debates have been ongoing over how much financial autonomy regions should have. These processes are present elsewhere as well. In recent decades, established democracies have undertaken constitutional reforms that have transferred political power away from the national level and towards the regional level of government.

However, what is often overlooked is that these decentralisation processes are initiated, driven and shaped by state-wide political parties. These parties adopt distinct views on territorially-based political struggles. In elections, they compete on the question of whether or not to decentralise power and when they form national governments, they take decisions to transfer power to regions. This means that understanding their stance towards decentralisation is crucial for understanding when and how the process unfolds. But what lies behind state-wide parties’ positions on this issue? What we are interested in uncovering is what shapes the position that parties adopt towards the assignment of power to regions.

We argue that parties’ positions on the issue of decentralisation are related to their ideological beliefs. More specifically, their positions are shaped by the preferences they hold on the two key underlying components of ideology: economy and culture. This is due to the fact that decentralisation is a political issue related to the nature of governance which, as Liesbet Hooghe and Gary Marks have suggested, raises questions of efficiency and redistribution on the one hand and of identity on the other.

To test these hypotheses, we used data on party positions from an expert survey carried out by Ken Benoit and Michael Laver.  A party’s position is measured by experts’ assessments: low values indicate that a party ‘opposes’ while high values indicate that a party ‘promotes the decentralisation of administration and decision-making’. To evaluate the effect of a party’s position on the economic and cultural ideological dimensions, we used scales measuring parties’ attitudes towards raising taxes to increase public services and towards personal freedoms and traditional values. The dataset includes 284 parties in 31 countries.

The results of the analysis show that decentralisation does tap into the logics of efficiency and redistribution on the one hand and identity on the other. Parties’ positions on decentralisation are related to both the economic and cultural ideological dimensions. 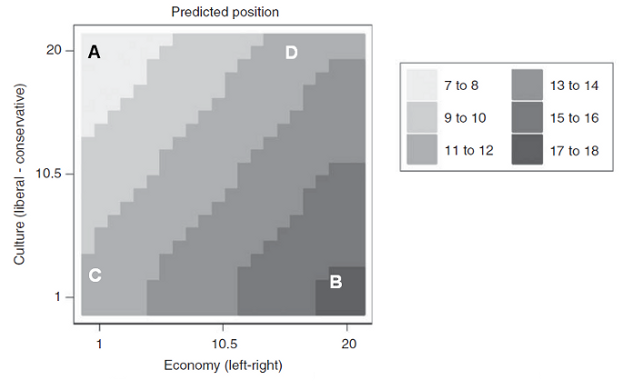 While these results illustrate an important general pattern, our analysis also shows that the structural, institutional and strategic context in which state-wide parties compete shapes whether decentralisation is viewed primarily through an economic or cultural lens.

Two important contextual factors are the degree of regional self-rule and the degree of regional economic disparities. We find that parties’ positions are better explained by their economic ideology when there is a higher degree of regional self-rule and when there are greater regional economic disparities. So, in countries like the United States, where state governments enjoy a substantial degree of autonomy from the federal government, especially in matters like taxation, and where there are important differences in wealth between states, decentralisation raises primarily questions of efficiency and redistribution. Thus, parties’ positions in such countries are strongly influenced by their economic ideology, with left-wing parties like the Democrats being less favourable to decentralisation than economically right-wing parties like the Republicans. This also applies to other countries, such as Belgium, which also have high degrees of self-rule and economic disparities. In contrast, in unitary countries with low levels of regional disparity, like the Netherlands, we expect a much weaker association between parties’ economic ideology and decentralisation.

A final important contextual factor is the presence of regionalist parties such as the Scottish National Party (SNP) in the UK or Nieuw-Vlaamse Allantie (NVA) in Belgium, which articulate demands for territorial autonomy or independence. These parties are an important source of influence on the positions of state-wide parties. The latter will respond to the presence of a regionalist electoral threat by adopting accommodative, pro-decentralist strategies. Regionalist parties present a stronger threat to state-wide parties if they are ideologically similar. In the UK, for example, the Labour party endorsed devolution when threatened by an economically left-wing SNP. Similarly, the right-wing Flemish regionalist parties forced Christian Democratic and Liberal parties to adopt decentralist stances. 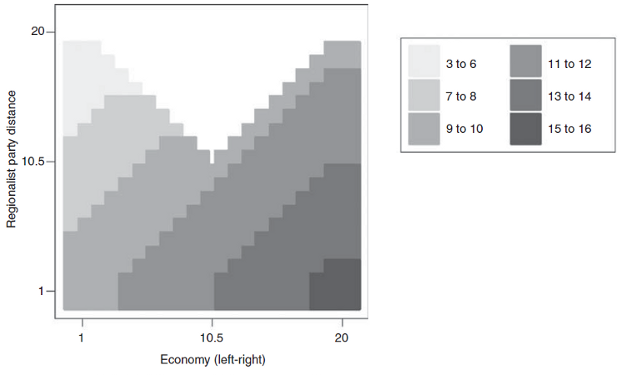 In conclusion, parties’ positions on decentralisation are determined by their ideological views on economic and cultural matters, and the influence of economic ideology varies depending on the structural, institutional and strategic context. These findings are important because they show how decentralisation taps into questions of both efficiency and redistribution, as well as identity. These elements are widely visible in contemporary constitutional debates. For example, at the heart of current discussions surrounding the possible independence of Scotland and Catalonia, political parties and electorates are taking stances according not only to how they feel about their regions’ historic identities, but also according to how they view their region’s future economic prosperity.