Those who hoped the collapse of financial markets would usher in the end of neoliberalism and rehabilitate support for traditional social democratic policies programmes have been disappointed. Instead, neoliberals have thus far shaped the discourses surrounding austerity, shrinking the State and slashing welfare. How and why this has been the case, and how the centre-Left might successfully counter-attack this narrative, are the focus of the excellent collection of essays in Progressive Politics After the Crash, writes Peter Dorey.

Progressive Politics After the Crash: Governing from the Left. Olaf Cramme, Patrick Diamond and Michael McTernan (eds). I. B. Tauris, 2013.

Ostensibly, the 2008 international financial crash ought to have sounded the death-knell for thirty years of hubristic neoliberal hegemony in the West, and consequently prompted a fundamental questioning of the continued efficacy of turbo-Capitalism. Yet in spite of the popular opprobrium directed against mega-rich bankers and the ‘too big to fail’ institutions of finance capital, the seemingly paradoxical political response, in many countries, has been a vigorous restatement and entrenchment of neoliberal orthodoxies, coupled with the rise of sundry populist parties emanating from the Right. As such, the political responses to the post-2008 economic crisis lend particular piquancy to Antonio Gramsci’s observation that: ‘The crisis consists precisely in the fact that the old is dying and the new cannot be born; in this interregnum a great variety of morbid symptoms appear.’

Certainly, the international fiscal crisis has not led to a serious or systematic political challenge to neoliberalism. On the contrary, in many Western nations, the post-2008 dominant narrative has blamed ‘excessive’ state regulation and public expenditure for precipitating the contemporary economic crisis. Thus, instead of being portrayed or perceived as a failure of capitalism and ‘the market’, the Right have assiduously depicted the economic collapse as incontrovertible evidence of the failings of social democracy and regulatory, redistributive, politics, and thus forced the Left onto the defensive.

How and why this has been the case, and how the centre-Left might successfully counter-attack this narrative, are the focus of the excellent collection of essays in Progressive Politics After the Crash. With chapters written by some of the most eminent political scientists in their particular field, this co-edited volume is divided into two broad parts; first, an analysis of the post-2008 economic and political environment in which socialists and social democrats are operating, and second, proposals for an agenda for the Left which might enable them to reverse their recent defeats, both intellectually or ideologically, and electorally.

However, the first part of Progressive Politics After the Crash emphasises that many of the erstwhile assumptions and analyses of the Left need to be significantly revised or reconsidered, due to the nature of the changes in many Western societies since the 1980s; rhetoric and strategies for mobilising or radicalising the working class will no longer suffice (assuming that they ever did). The traditional proletariat has diminished as a consequence of automation, de-industrialisation and globalisation, thereby fatally undermining a political strategy based on class identity, regulation of a domestic economy, and redistribution from the wealthy to the working class.

Instead, as Peter A. Hall observes, new cross-cutting cleavages and forms of social identity have burgeoned since the 1980s, not least of which are inter-generational differences and the concomitant development, especially among younger, university-educated, citizens, of post-materialism and new values pertaining to cultural identity, environmental concerns and sexual politics. For many of the young, therefore, notions of class conflict or interests, and debates about modes of production, are irrelevant – or are widely perceived to be. Moreover, in societies with ageing populations, debates about the welfare state are increasingly seen, not in terms of wealth redistribution from rich to poor, but in terms of (potential) inter-generational conflicts. For example, how welfare provision, particularly in an era of austerity and retrenchment, should be allocated between old age pensions in comparison to funding either (free) education or job-creation for the young. This exemplifies just one manifestation of what Jeffry A. Frieden, in another chapter, terms the ‘many faces of distributional conflicts’ in contemporary Capitalist societies, and which thus means that ‘the political challenges are daunting’.

Moreover, in a globalised economy, the super-rich, bankers and large corporations are often highly mobile (far more so than they have ever been previously), and can therefore relocate or emigrate (or merely threaten to do so) if they perceive that they are being subjected to punitive fiscal or regulatory policies by any individual government or nation-state. Clearly, in this context, they are rather more likely to be hostile towards governments of the Left, which further adds to the problems facing social democratic parties in devising viable alternatives to rampant neoliberalism and relentlessly widening inequality.

Yet the authors of Progressive Politics After the Crash come not to bury social democracy, but to (p)raise it, and thereby imbue it with renewed resonance and popularity, although given the preceding analysis, their prognosis entails considerable revision of previous modes of social democracy – just as these former versions of social democracy themselves represented new or updated versions of democratic socialism. For example, there is widespread cognizance that the Left has tended to over-emphasise the objective of taxing the rich more heavily in order to pursue a programme of redistribution – a point noted by Anthony Crosland back in 1956. It is argued, though, that even if the top 1%, or even top 5%, were charged a higher rate of income tax, then (quite apart from the problems of avoidance or evasion) the sums raised would still fall short of the revenues required to fund the plethora of social policies urged by social democrats.

A further objection alluded to vis-à-vis the Left’s alleged belief that ‘taxing the rich’ is some kind of panacea for eradicating inequality is that such a stance focuses on income redistribution, whereas what is really needed now are policies of ‘pre-distribution’. This is characterised as a series of economic and social reforms intended to regulate the market more carefully and imaginatively, while simultaneously promoting greater social investment (not least through widening educational opportunities, job creation and a more effective minimum wage ), and thereby promote a more equitable distribution of earnings in the first place. It is also suggested that company shareholders should be strengthened, thereby exercising more effective control over excessive boardroom pay, and that workers (not just trade unions) should be granted a stronger voice in the workplace.

Several of the authors, not least Colin Crouch, envisage that such a programme could broaden the appeal of social democracy, and foster the creation of new political alliances and social movements among citizens who have never before identified with the Left or ‘progressives’ of any kind. Now that there is widespread concern and anger about the top 1% and the recklessness of financial elites, coupled with a new ‘squeezed middle’ affected by job insecurity, salary freezes or pay cuts, rising living costs, and also seeing their own children seriously affected by university fees and/or house prices, it is envisaged that a revised social democracy could attract new sources of support. Moreover, this need not be confined to general elections and orthodox political parties (many of them discredited or experiencing dealigment), but might be achieved through grass-roots or ad hoc campaigns on specific issues; the Occupy Movement is cited as a small example.

In spite of the Right-ward shift witnessed in many countries since 2008, and the extent to which neoliberals have thus far shaped the discourses surrounding austerity, shrinking the State and slashing welfare, the contributors to Progressive Politics After the Crash remain quietly optimistic that the current economic crisis offers ample scope for social democrats to craft a new programme, one which exposes the inherent contradictions, injustices and divisiveness of untrammelled neoliberalism, and in so doing, broadens the popular appeal of social democracy way beyond those who previously supported it.

Whether this cautious hope is justified, or subsequently proves to be the latest variant of Left-ish wishful thinking – that ‘this time’ things will be so bad, and objective conditions so propitious, that fundamental and progressive change will finally occur – remains to be seen. 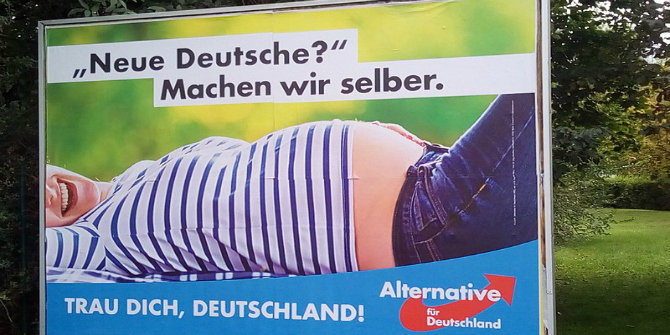 Book Review: Economics and HIV: The Sickness of Economics