More than half of the EU budget is dedicated to Structural Funds, which are allocated across EU regions with the aim of promoting economic and social development. Lisa Dellmuth, Michael Stoffel and Dominik Schraff write that the use of decentralised authorities to allocate structural funding can create substantive problems for the EU’s policy goals. They illustrate that the distribution of funds often reflects local political concerns, with districts that support the regional government’s party receiving disproportionate shares of funding.

The Structural Funds are allocated within the framework of the EU’s financial perspective, which specifies expenditure ceilings and eligibility criteria for regions for a period of seven years. The amount of funding each region receives in the course of a seven-year period is fixed at the beginning of the financial perspective. Subsequently, regional governments invest Structural Funds in local projects across a large range of areas, such as transport, business development and communications infrastructure.

Regional governments enjoy a large amount of discretion in selecting local projects. The procedure of payment takes place as follows. After financing projects in advance, regional governments submit aggregated statements of expenditure to the European Commission several times a year. The Commission then reimburses regional expenses. In this process, the Commission can confirm or amend the rate of Structural Funds assistance in order to ensure that the projects receive the resources needed for their achievement without the beneficiaries acquiring any unjustified advantage, for example through a distortion of market conditions.

According to EU treaties, the Commission can penalise sub-state governments by cutting back the amount of funding, in the case of irregularities or ineligible expenditures, as explained in a European Court of Auditors’ 2008 Report. Despite the Commission’s supervisory role, however, regional governments retain significant discretion in choosing projects, as the legal framework does not provide clear-cut eligibility criteria for projects.

Motives and behaviour of regional governments in allocating funds locally

We examined the motives and behaviour of regional governments in allocating Structural Funds across 419 German local districts during the period 2000-2006. Germany makes an excellent case study for an inquiry into the political-economic process culminating in the local allocation of EU Structural Funds, as Länder (German state) governments are popularly elected. Our analysis yields three main results.

First, regional governments allocate Structural Funds across local districts largely in accordance with needs-based criteria, as specified in the EU regulatory framework. The bulk of the Structural Funds are spent to alleviate structural problems related to urbanisation, high unemployment and lagging economic performance.

Note: The solid lines show how the effect of support for the state prime minister’s party on the spending of EU funds varies depending on the unemployment rate and GDP per capita of districts. In other words, in addition to it being more likely that EU funds will go to districts with high levels of support for the state prime minister’s party, it is also more likely that of these districts, those with high unemployment/low GDP per capita will receive particularly high levels of EU spending. The shaded area shows 90 per cent confidence intervals. Source: Dellmuth and Stoffel

Third, regional governments allocate more EU funds across stronghold areas where electoral turnout is high. That is, they use differences in the level of electoral mobilisation to make distributive decisions among their many core constituencies (see Figure 2 below). 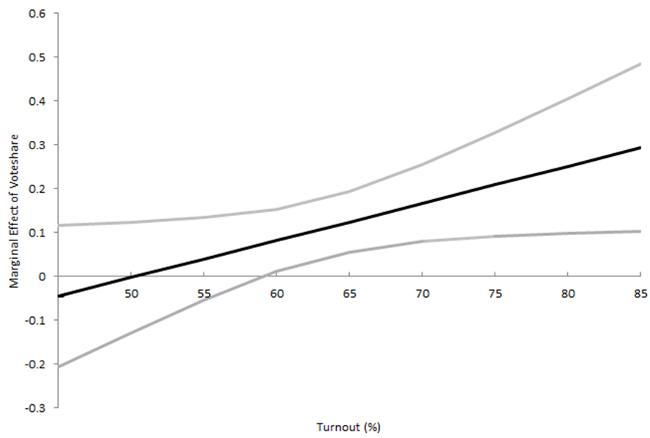 Note: Similar to Figure 1, the dark line shows how the effect of support for the state prime minister’s party on EU funding changes relative to turnout within districts. The higher the turnout within a district, the more pronounced the effect. The lighter lines show 90 per cent confidence intervals.  Source: Schraff

Controversy over the decentralisation of EU Structural Funds

The extent to which our results will generalise to other countries is uncertain, and further studies that cover more countries will tell us how far they hold. However, we expect to find similar political distortions in local EU funds allocations in other Member States with popularly elected regional governments, such as Spain or the UK.

The German case adds new insights to an ongoing controversy about the design of EU Structural Funds which pivots around the question of how much discretion should be granted to Member States in reallocating Structural Funds locally. Our results clearly show that the decentralisation of EU structural policy comes at a cost. Regional governments may use their discretion to reward core voters, potentially undermining EU funding goals.

This, in turn, may help explain why many studies, including an article by Lebre de Freitas et al, find little correlation between Structural Funds transfers and desirable changes in macroeconomic indicators. Future discussions about the design of EU structural policy are likely to revolve around the trade-off between the benefits of a decentralised allocation of Structural Funds and the costs arising from a relatively non-transparent allocation process and potential political distortion. A crucial question that EU citizens and policy-makers have to answer for themselves is: Do we want to bear these costs, and, if so, to what extent?

Lisa M. Dellmuth – Stockholm University
Lisa Dellmuth is Postdoctoral Research Fellow in the Department of Political Science at Stockholm University. Her research focuses on comparative political economy, international relations and public opinion towards international organisations, and has been published in leading EU journals. In 2012, she received the SAGE Award for Best Article Published in European Union Politics, Volume 13.

Michael F. Stoffel – University of Mannheim
Michael Stoffel is Postdoctoral Researcher in the Mannheim Centre for European Social Research at the University of Mannheim. His research covers a broad variety of topics within the fields of political economy, comparative politics and political methodology. His recent publication with Lisa Dellmuth won the SAGE Award for the Best Article Published in European Union Politics, Volume 13.