Christian Democratic parties have been a stable feature of many western European party systems since the early 20th century. As Tim Immerzeel, Eva Jaspers and Marcel Lubbers write, however, support for Christian Democrats has fallen significantly in several European countries. Based on an analysis of voting patterns in Europe, they argue that radical right parties have the potential to win the votes of religious citizens who have traditionally supported Christian Democratic parties. This effect depends to a large extent on how threatened Christian voters feel by the presence of immigrants subscribing to other belief systems.

Religion played a significant role in the vote for a political party in the 20th century. Since the beginning of that century, the religious cleavage has captured the majority of Christian voters in religious groups that had their own Christian parties. As a consequence, Christian democratic parties largely dominated 20th century West European politics. Now that Western Europe is increasingly secular and more and more people are leaving the church, scholars have argued that Christian-democracy and religion has waned. Christian parties have become less popular and new political parties have successfully entered the political arena. As an example, the Chart below illustrates the decline in the number of seats held by Christian parties in the Netherlands.

Chart: Seats held by Christian parties in the Dutch parliament (1960-2012) 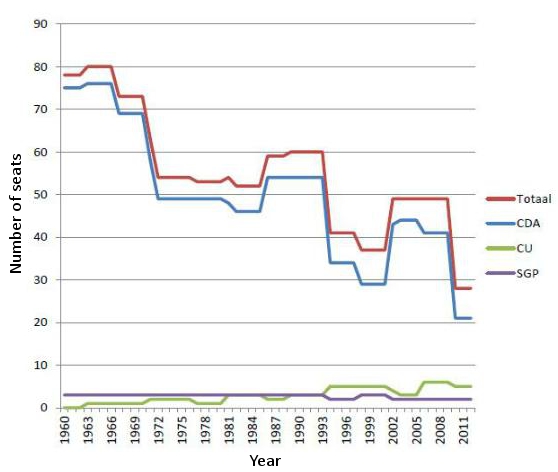 The radical right party family is one such family that has recently gained more prominence in most of the West-European party systems. Anti-immigrant parties like the French Front National and the Austrian FPÖ have received in some elections more than 15 per cent of the votes. Studies into the electorate of these parties show that regular Christian churchgoers tend to avoid them and people who never attend church are most likely to vote for these parties. Nonetheless, the popularity of these parties poses a serious dilemma for the gradually declining group of Christians who have always voted for Christian parties.

Let’s take a hypothetical example. Imagine John: an orthodox West-European Christian who believes that Christianity is the only true religion. He goes to church once or twice a week and lives in a village with many fellow Christians. Many political scientists will predict that John votes for a Christian party because they share the same convictions, norms and values. Parties defending Christianity and religious interests, and proposing policies that are indirectly/directly derived from the Bible are logical choices for Christian believers. In addition, some scientists reason that Christians feel closer to these Christian parties because they are member of a religious community where it is the norm to vote for these parties, irrespective of their ideological similarities. If John’s wife Mary, his best friends Luke and Matthew, and his neighbours Peter and Ruth also vote for a Christian party, then it might be uncomfortable for John to vote differently.

Processes of globalisation and immigration have fundamentally changed the ethnic and religious diversity of many West European countries. The high influx of immigrants in Western Europe has been accompanied by an increasing prevalence of other religions and in particular Islam. Muslim leaders were able to publicly propagate fundamentally different claims than their Christian or secular counterparts. Following religious coping theory, we argue that this religious diversity poses a more serious religious threat to many orthodox Christian believers than to mainstream tolerant believers. People like John may feel that their own sacred worldview is violated or threatened by Muslims who proclaim fundamentally different truths. This insecure feeling may trigger orthodox Christians to develop more negative attitudes towards Muslim immigrants.

If orthodox Christians become more negative towards Muslim immigrants, we assume that anti-immigrant parties become more attractive alternatives for orthodox Christians. Radical right party leaders have more fiercely politicised the issue of religion and emphasised the importance of Christianity as part of the national identity. For example, Geert Wilders, the Dutch radical right leader, wrote in his 2010 manifesto that: ‘the PVV (Party of Freedom) devotes oneself to the traditional Judeo-Christian values that brought the Netherlands the success that it has now’. He sketched how the contemporary Dutch Judeo-Christian society is threatened by the presence of Muslim immigrants and proposed tougher measures on immigration and integration to combat this threat.

We investigated how the content of one’s belief system, next to religious attendance, is related to voting behavior. We argue that both the content and attendance may be relevant in explaining one’s voting behavior, but in different ways. The results of our study show that religiously active people are indeed less likely to vote for radical right parties because they tend to vote for Christian parties. However, we also show that orthodox believers in three countries (Belgium, Norway and Switzerland) feel more threatened by the presence of immigrants. This partly explains why they are more likely than their more tolerant, mainstream fellow Christians to vote for the Vlaams Belang (Flemish Interest), the Progress Party or the Swiss People’s Party instead of the CD&V, the KRF or the CVP. As such, we show that religion may play a double role in the decision to vote for either a Christian party or a radical right party.