Proposals to reform Italy’s electoral system and alter the balance of power between the country’s two parliamentary chambers are currently being considered by a parliamentary committee. Giulia Pastorella gives an overview of the proposals, arguing that while the new electoral law would generate some benefits, it would be no more democratic than the current version, and is unlikely to solve the key problem of party system instability.

Anyone following Italian politics in recent months must have been surprised at the increasing number of –ellum ending, Latin-sounding words appearing in newspapers. Mattarellum, Porcellum, Italicum. These nicknames stand for Italian electoral laws, the latter being the new version intended for the next elections.

The proposed Italicum is currently being amended in the Constitutional Affairs committee of the Italian Parliament and is causing a heated debate on the left and right of the political spectrum, and in academic circles too. In order to understand what the current controversy is about, and why Italicum is not the solution to Italy’s problems, a quick overview of the tortuous historical evolution of Italy’s voting system might help to set the scene.

The Mattarellum took its name from Sergio Mattarella, its rapporteur. It was approved by a referendum in 1993, in which Italians expressed the will to move from proportional representation (PR) towards a more majoritarian system: closed lists; 75 per cent of seats allocated on a ‘first-past-the-post’ system, like the British one, and the remaining 25 per cent of seats allocated on a PR basis, with a 4 per cent minimum threshold.

The Mattarellum had almost the opposite effect of its original intention. It prevented the disappearance and dissolution of small parties into big ones. As each party could maintain its parliamentary seats even if it broke away from a coalition, more fragmentation followed, including several collapses of both electoral and governing coalitions.

The Porcellum takes its name from a declaration of the then Minister for Reforms Roberto Calderoli, from the Lega Nord (Northern League), who, despite being its main proponent, declared it ‘una porcata’, meaning either ‘a load of rubbish’ or ‘a dirty trick’ – probably both. As Matteo Garavoglia explained convincingly elsewhere on this blog, the 2005 electoral law was an anomaly in Europe. Indeed in a ruling on 4 December 2013 the Italian Constitutional Court declared the majority prize and the closed lists of the Porcellum unconstitutional. The former gives the winners too many seats compared to the number of votes obtained: 55 per cent of seats whatever the majority gained. The latter prevents voters from exercising their democratic prerogative of expressing a preference for specific candidates.

The Italicum aims at achieving governability, bipolarismo(a system in which smaller parties line up behind two larger parties) and the elimination of the excessive bargaining power of smaller parties. That is, in other words, what both preceding laws tried to obtain without much success.

The two major Italian newspapers, Corriere della Sera and La Repubblica, have both made predictions, based on current polls, on what the next Parliament would look like if the new electoral law were to be adopted as a voting system in the next elections. The predictions would seem to confirm the objectives. Corriere sees either Angelino Alfano’s NCD return home with Berlusconi or make alliance with centrist parties such as Mario Monti’s Scelta Civica. Both these options would still leave the PD ahead, giving it the 18 per cent majority prize on top.

Chart 1: Predicted seats in Italian Chamber of Deputies under the new electoral law (centre-left coalition reaches 35 per cent in first round of voting) 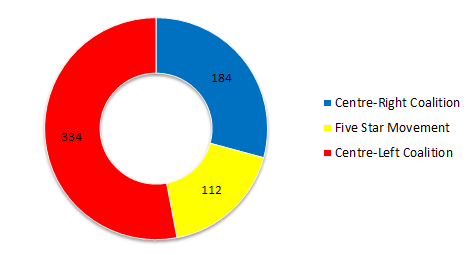 Chart 2: Predicted seats in Italian Chamber of Deputies under the new electoral law (centre-right coalition reaches 35 per cent in first round of voting) 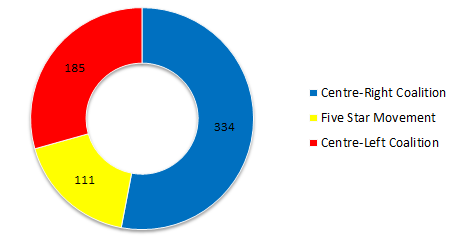 This picture looks quite promising to the Italian eye, used to an excessively fragmented parliament, hostile to grand-coalitions like the current governing one, and conscious of the limitations of Grillo’s protest (non-)party Movimento Cinque Stelle (Five Star Movement, M5S). However, the fundamental question remains: will the new electoral law make the Italian political system more democratic, or at least more stable?

The new system is not any more democratic than its predecessor. Undoubtedly it does prevent the phenomenon of the liste civetta by forbidding the same candidate from running in several constituencies, and shorter closed lists allow voters to get to know the candidates. Nonetheless, and more importantly, no real candidate preference can be expressed. The ‘majority prize’ not only seems unnecessary if there is the possibility of a second round of elections, but remains disproportionately high compared to the 35 per cent threshold. A third of the electorate could impose its will on the remaining two thirds.

The new electoral law would not make the political system more stable either. Certainly the short lists are an incentive to form coalitions and propose one single candidate per constituency, but this does not ensure governability, as once the majority prize is obtained or once the threshold has been passed, coalitions of smaller parties have no reasons to remain together.

Indeed, the stability of a party system is not only down to the electoral law. Contrary to Duverger’s law, majoritarian electoral systems do not lead invariably to stable two-party systems, and the Italicum will not necessarily lead to stable bipolarismo. As political scientist Giovanni Sartori – who by no coincidence is Italian – already understood decades ago, and repeated recently, parties themselves determine the stability of the political system. This is particularly the case in Italy, where the familiar political pathologies, which the new electoral law wants to throw out of the window, will probably return through the back door.

To the Italicum’s credit, it has to be granted that the proposed law opens the possibility to reform the Senate. The reform would put an end to the equal powers of the two chambers, or ‘perfect bicameralism’ of Italy, which is an invariable recipe for gridlocks and un-governability. However, as any disillusioned Italian knows, political promises are worth very little unless they are kept.

The law is now being considered and amended by the Constitutional Affairs parliamentary committee. The modified proposal will be discussed in plenary from the 29th January onwards and be approved by both chambers by the 25th of May, the day of the European Elections. The text coming out of the legislative process might look quite different from the current version. One can only hope that it will be changed with both these two prerogatives in mind: governability and democracy.

Giulia Pastorella – LSE European Institute
Giulia Pastorella is currently a PhD candidate at the LSE European Institute.  Her research focuses on technocratic cabinets in post WW2 European democracies. She graduated in 2011 with a Double MSc in European Affairs from the Institut d’Etudes Politiques (Paris) and the London School of Economics. In 2009 she obtained a BA in Philosophy and Modern Languages from Oxford University.

Book Review: The Europe of Elites: A Study into the Europeanness of Europe’s Political and Economic Elites